To see the full report, go to

JUST IN THE nick of time for next week’s elections, a dedicated group of local policy and data wonks has compiled a trove of most of the campaign contributions going to City of Savannah mayoral and alderman at large candidates.

The highlights of "Transparent Savannah," as you might imagine, are pretty revealing. And all of it, of course, is public information.

Compiled by Jennifer Lawver, Michelle Pompei, and Michelle Solomon, the data highlights combined donations to candidates of $1000 or higher.

In addition to their own highlighted spreadsheets, they have linked to PDFs of the actual campaign finance reports of all candidates — including the district races — so you can see nearly 100 percent of all donations. (The data does NOT include the filings from the most recent finance report, so most totals will end up higher.) 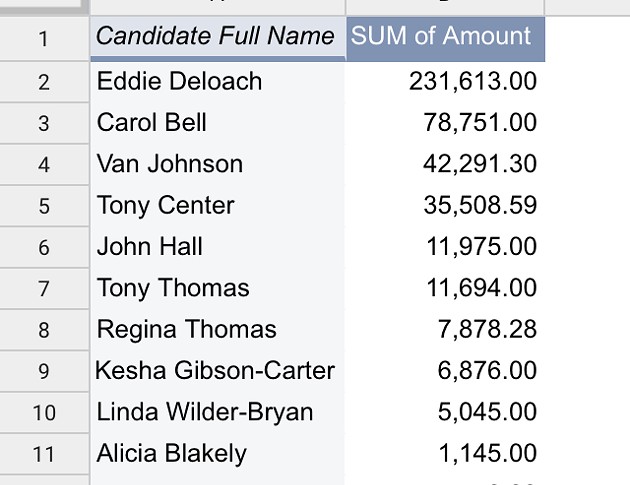 The takeaways are numerous. Here are some key points:

• The financial gap between Mayor Eddie DeLoach and his challengers is truly enormous. Since taking office after the 2015 election, DeLoach has garnered nearly a quarter million dollars in contributions ($231,613) to be exact.)

His highest-profile challenger, Van Johnson — a very well-known name who has been on Council for 16 years — has raised only $42,291 by comparison.

To be fair, this isn’t apples to apples, since Johnson didn’t announce his candidacy until this year. DeLoach has had a much longer time period in which to raise money.

Mayoral candidate Regina Thomas has raised $7878.28 to date, which includes a roughly $4000 loan to herself (this is a relatively common practice and is in no way unusual, for those wondering).

Other than her own loan, Thomas has only a single four-digit donation, for $2000.

Mayor DeLoach, by contrast, has by my count 103 separate donations of $1000 or higher.

That’s not a typo — one hundred and three separate four-digit donations.

• Some contributors are.... interesting. For example, one of Mayor DeLoach’s largest contributors is Pooler-based Atlantic Waste Services, which to the best of my knowledge currently serves no customers within the City of Savannah, of which DeLoach is mayor.

(“They don’t yet, anyway,” wisecracks one cynical local observer.)

Another maxed-out DeLoach contributor, Richard Kessler, is arguably the entity who has most profited directly from the DeLoach administration, with his Plant Riverside development getting a City bond issue to build a parking garage.

That said, you can read too much into this. For example, architect Pat Shay’s projects also benefited greatly from the DeLoach administration — but Shay only gave $200 to DeLoach.

• Mayor DeLoach and Alderwoman at Large Carol Bell have many donors in common. Many of the same names who have contributed to DeLoach have also contributed to Bell, in roughly equal amounts.

For example, Richard Kessler also maxed out to Bell, in the amount of $2800.

The aforementioned Atlantic Waste Services also maxed out to Bell, in the amount of $2800.

One of DeLoach’s key early backers in 2015, Dulany Industries, maxed out to both DeLoach and to Bell.

The perennially influential Savannah law firm Hunter Maclean contributed to both DeLoach and Bell, through their own Political Action Committee.

To be fair, many of these donors also contributed to other candidates in addition to DeLoach and Bell — so it’s possible to read too much into this synergy.

Often, candidates simply refund the overage amount back to the donor.

And as the data compilers say, many violations can be chalked up to donors not understanding that the $2800 limit is for a whole election cycle, not just per year.

So it’s easy to be in violation even if you don’t intend to be.

But some donations stand out. And if the data’s correct, it seems that every possible violation is by a DeLoach donor.

For example, the previously mentioned Atlantic Waste Services appears to be donating nearly twice the legal limit to DeLoach, coming in at $5000.

Ben Wall of Atlantic Waste Services added another $3500 himself — which is also well over the $2800 limit.

Yates Astro appears to have given DeLoach a too-high $4600.

If the data compilers and I are wrong on this, I’ll be happy to run a correction. But the data in the report appears to be diligent and sound.

• Incumbents have raised nearly a million dollars among them. That’s a lot of money for positions which range from the mayor’s $57,000 a year salary to $25,000 a year for alderman positions. Draw your own conclusions.

• It is what it is. Cynical observations and jokes aside, all the candidates, incumbents and challengers alike, are running within a legal framework which allows, and even encourages, money to play a leading role.

It is not proof of malicious intent to donate to a candidate.

Nor is it proof of a quid pro quo if a candidate accepts a donation.

Not only that, some donors give money to competing candidates.

For example, Uresh Patel, whose Eagle Market stores have to come in front of City Council to get alcohol licenses approved, gave $2500 each to both Mayor DeLoach and Van Johnson.

If you have to hate, don’t hate the player, folks — hate the game.