After DeLoach and the new Council were officially sworn in, master of ceremonies Sonny Dixon – who himself considered a mayoral run in 2015 – asked former Mayor Otis Johnson to the podium to introduce outgoing Mayor Edna Jackson.

Otis Johnson, who Dixon said is “the smartest guy I know,” proceeded to deliver a straightforward but clearly heartfelt summation of Jackson’s life and career, all off the cuff.

And then, Jackson herself left her front row seat, ascending the steps to the stage with the help of new Mayor DeLoach. Flanked by DeLoach and Johnson, the vanquished Jackson delivered a brief but very upbeat and positive speech about the value of unity and moving forward for the good of all Savannah. 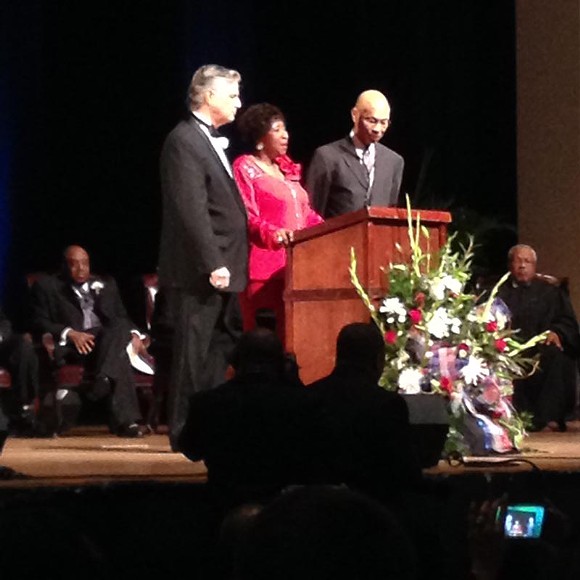 New Mayor DeLoach's humble inaugural address also stressed the need for inclusiveness and working together. Perhaps significantly, one of the many historical figures he name-dropped in the speech included Malcolm Maclean, a white Savannah mayor from the '50s-'60s known for his pioneering work with early Civil Rights leaders.

The theme of unity was the surprising star of this inauguration, coming on the heels of what Alderman Van Johnson identified in his council acceptance speech as the most divisive election he had seen.

And then? Right after saying, “I have news for you this evening: The campaign is over,” Alderman Johnson proceeded to give what sounded like his first campaign speech of his 2019 Mayoral campaign!

(He has since denied any such aspirations.)

Cynical predictions aside, Alderman Johnson’s speech was indeed remarkable, and I was heartened to hear him echo the opinion of many other observers when he said this election “gives us the opportunity to finally – finally! – deal with the elephant in the room” of classism and racism in Savannah.

In his speech, Alderman Johnson also pointedly referred to the need to stop “assassinating each other on social media,” to cheers from the audience.

He could of course have been talking about virtually anyone who posted an opinion during this heated election.

But I couldn’t help but wonder if he was particularly referring to his fellow Alderman, Tony Thomas, who sat about ten feet away on the stage.

As most of you are now aware, Alderman Thomas is a longtime Facebook power-user with seemingly little to no filter. His blunt, Trump-like willingness to speak his mind is one reason he is so popular in his district.

A couple of hours before this inauguration – which like any inauguration had solemn overtones and promise of new hope – Thomas made a Facebook post that was juvenile and needlessly divisive even by his standards.

The post accused DeLoach, who hadn’t even been sworn in at that time, of unethically trying to oust current City Manager Stephanie Cutter.

Outgoing Alderwoman Mary Ellen Sprague – who unlike Thomas was defeated for reelection – echoed Thomas, also blabbing in an alarmingly unprofessional fashion on Facebook about the supposed “secret” effort.

Of course, the need for Savannah to have a new City Manager was the worst kept secret of the campaign. It was the subtext to virtually every conversation, underpinning most every candidate forum and debate whether a single word was said about it out loud.

But most supporters seemed to think that if DeLoach had in fact got the ball rolling on Cutter’s resignation/termination before being sworn in, it wasn’t a moment too soon and was in fact one of the key reasons they voted for him in the first place.

Sprague’s efforts to publicly undermine the new administration are at least understandable in a human sense, given that she was overwhelmingly rejected by voters in her district. She is likely hurt and angry, and who wouldn’t be?

But Thomas’s online outburst, while characteristic, was on another level of spite.

The idea that mere hours before a new Mayor was inaugurated during a time of great strife, a reelected Alderman – Savannah’s longest-serving – would throw a figurative hand grenade into the room nearly beggars imagination.

It's true that Thomas supported Edna Jackson over Eddie DeLoach in the runoff. It was an endorsement he revealed only after he was securely reelected, much to the chagrin of many of those who voted for him.

But plenty of other voters also chose Jackson over DeLoach and managed to refrain from such needlessly destructive tactics.

In any case, my guess is that Van Johnson will emerge as DeLoach’s main political foil on Council, and Thomas will find himself off the working majority -- a position he seems to have chosen for himself.