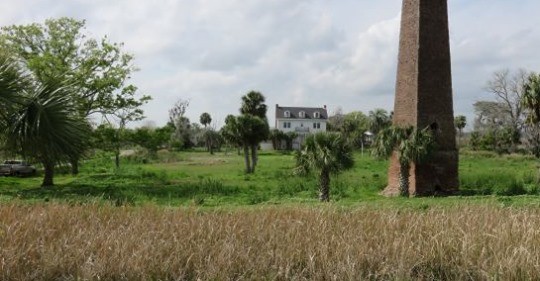 The main house on the old Butler Island Plantation in McIntosh County.

THE Georgia state legislature made it illegal for cities to remove or replace even one Confederate monument.

But literally hundreds of beloved state heritage sites which don’t memorialize the Confederacy are on the chopping block if a new bill passes the State Senate.

HB 906, which already passed the Georgia House, will open up over 330,000 acres of Heritage Preserve-protected land — in over 120 sites — for potential sale and development, “without any restriction on current use or historic importance,” says the Ossabaw Island Foundation, one of many groups deeply concerned about the potentially devastating impact of the bill.

Little Tybee Island, for example, could be sold off in 15-acre parcels for condo or other development if HB 906 passes.

The catalyst for the bill is a single developer, pushing for the right to build a distillery on a  portion of Butler Island Plantation in McIntosh County.

Savannahians will recognize Butler Island as one of two plantations from which hundreds of enslaved African Americans were taken to Savannah in 1859, during the largest sale of enslaved people in U.S. history — known as The Weeping Time.

“The Butler Island property is sacred to hundreds of people in coastal Georgia and across the state; especially to Gullah Geechee people and other African-American people who feel personal connectivity to the place as a homeplace,” the Ossabaw Island Foundation says.

The whole thing’s a land grab, pure and simple — the transfer of publicly-owned heritage sites into private hands.

Former President Jimmy Carter weighed in this past Monday with a letter urging that the bill be pulled or defeated.

What is particularly concerning to preservationists, activists, and historians is how the new bill strips the usual protections and checks on abuse.

State law currently requires that all transfers of property valued over $500,000 go before the Legislature. As written, HB 906 removes that section for any property that’s currently a Heritage Preserve and also up to and including 15 acres in size.

The bill would also remove the opportunity for public comment currently provided in the process of approval.

“The only opportunity for public comment is already in the law; it is during a hearing before the Georgia Natural Resources Commission, which is an appointed body,” says the Foundation.

Not only that, but apparently HB 906 could breach existing contractual agreements with private parties who donated or sold their property to the State. “Many of the lands designated as Heritage Preserves were sold or donated to the state of Georgia by private individuals or families, with the HP designation guaranteeing that their property would be preserved for future generations of Georgians,” the Ossabaw Island Foundation says.

Activists say to contact your state senator this week to voice your concerns.