A BUILDING BATTLE over Savannah property taxes seems to have been averted – for now – due to an infusion of federal coronavirus relief funds.

But the episode points out to me, again, the disastrous state of basic civics knowledge in Savannah.

Some of this of course is almost by design, and we’ll get to that part, too.

First, let’s talk about what millage, and the millage rate is – often mistakenly called the “mileage rate” by some, either due to misinformation or overzealous autocorrect.

No, property taxes have literally nothing to do with how many miles you’ve driven your car.

A mill is a thousandth of a dollar. It’s how property taxes are levied, in other words, charged.

The millage rate is the amount of property tax per dollar of “assessed value.” We’ll get to that too. 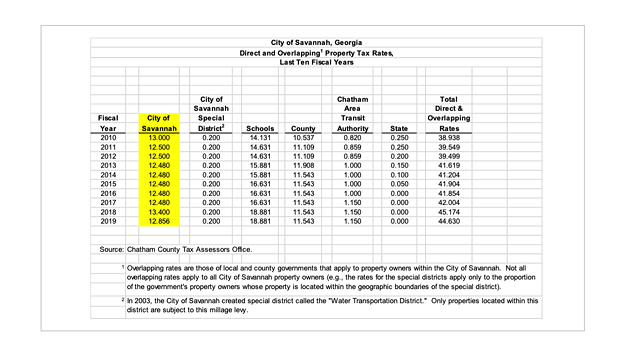 Other entities, like Chatham County and Chatham Area Transit, charge property taxes too (11.543 and 1.15 mills, respectively).

Typically, a property owner only pays taxes on 40 percent of the property’s assessed value – a value determined by an independent agency, the Chatham County Board of Assessors.

Not everyone’s property is assessed each year on equal terms. Chatham County, including Savannah, features what’s called the “Stephens-Day” homestead exemption, after area politicians Ron Stephens and Burke Day, who sponsored the law in the state legislature in 1998. (Perhaps not coincidentally, it was passed during a time of particularly high local millage rates.)

The Stephen-Day bill allows homeowners to freeze property taxes based on their purchase price, but only for their primary residence.

It does not apply to commercial property. A store or hotel owner can’t get it, for example, nor a landlord.

(But you do get to enjoy the increased value of your home if and when you sell it. And the buyer will pay property taxes on the new purchase price, not your purchase price.)

There’s a vigorous national debate about whether or not homestead exemptions like this disproportionately harm equitable funding of local services. But that debate will have to continue in a different space.

Do renters pay property taxes? Not directly. But if taxes go up where they live, that cost will almost certainly be passed on via rent increase.

This is the time of year when the City of Savannah has to set its millage rate. Whatever millage rate is adopted – same, higher, or lower – it takes effect in 2021.

(Interestingly, Savannah is one of few cities which operate their budget on a calendar year basis, rather than the more typical fiscal year beginning Oct. 1.)

Due to an expected $13 million immediate fall-off in City tax revenue, Mayor Johnson and four other members of the nine-member City Council – a majority – wanted to keep the millage rate the same.

However, overall tax revenue was higher over the past year, mostly due to new construction during the boom before the pandemic.

What is rarely discussed is how as the tax digest—or total value of all property— goes higher, cost of services can also increase due to new construction, sometimes outstripping higher revenue collection.

Regardless, when the digest increases, your payments can go up though the tax rate stays the same – because your property theoretically got more valuable.

The state government calls this a “backdoor tax hike.”

In 1999 the Georgia legislature passed a law saying that if a taxing entity makes more money through higher assessments while keeping the tax rate the same -- that’s still a tax increase in the eyes of the law.

And the City of Savannah is required to tell citizens their taxes might go up, and give them at least three public meetings to comment – even if the tax rate stays exactly the same.

To avoid having to tell citizens they’re getting a tax hike, the City would have to adopt what’s called the “rollback rate” – whatever millage rate would result in the same amount of revenue, considering the higher value of properties.

While the legislature had good intent with the law, unfortunately it’s also confusing to citizens due to the semantics over the definition of a tax increase.

And the characterization seems almost intended to provoke citizen outrage, and seemingly encourages politicians to grandstand on the issue.

The stated reason Mayor Johnson and other members wanted to keep the millage rate the same for next year was to avoid an estimated $600,000 in program cuts.

Other members supported adopting the “rollback rate,” which in this case would be 12.739 mills.

An intense political and personal battle developed, which is probably best dealt with another time.

In any case, the tax debate seems to have been averted at least for the time being.

Last week, the City was informed that it will receive over $7 million in federal funds through the CARES (Coronavirus Aid, Relief, and Economic Security) Act.

Therefore, it is almost certain that this week, Savannah City Council will adopt the “rollback” millage rate.

The real debate, however, will come next year, as the basically year-long pandemic recession is fully felt.

The battle then probably will not involve rolling back much of anything, and it is likely that proposals to increase tax rates —perhaps by a lot —will come to the table.

And then the fight will begin anew. But hopefully everyone can be better informed by then.