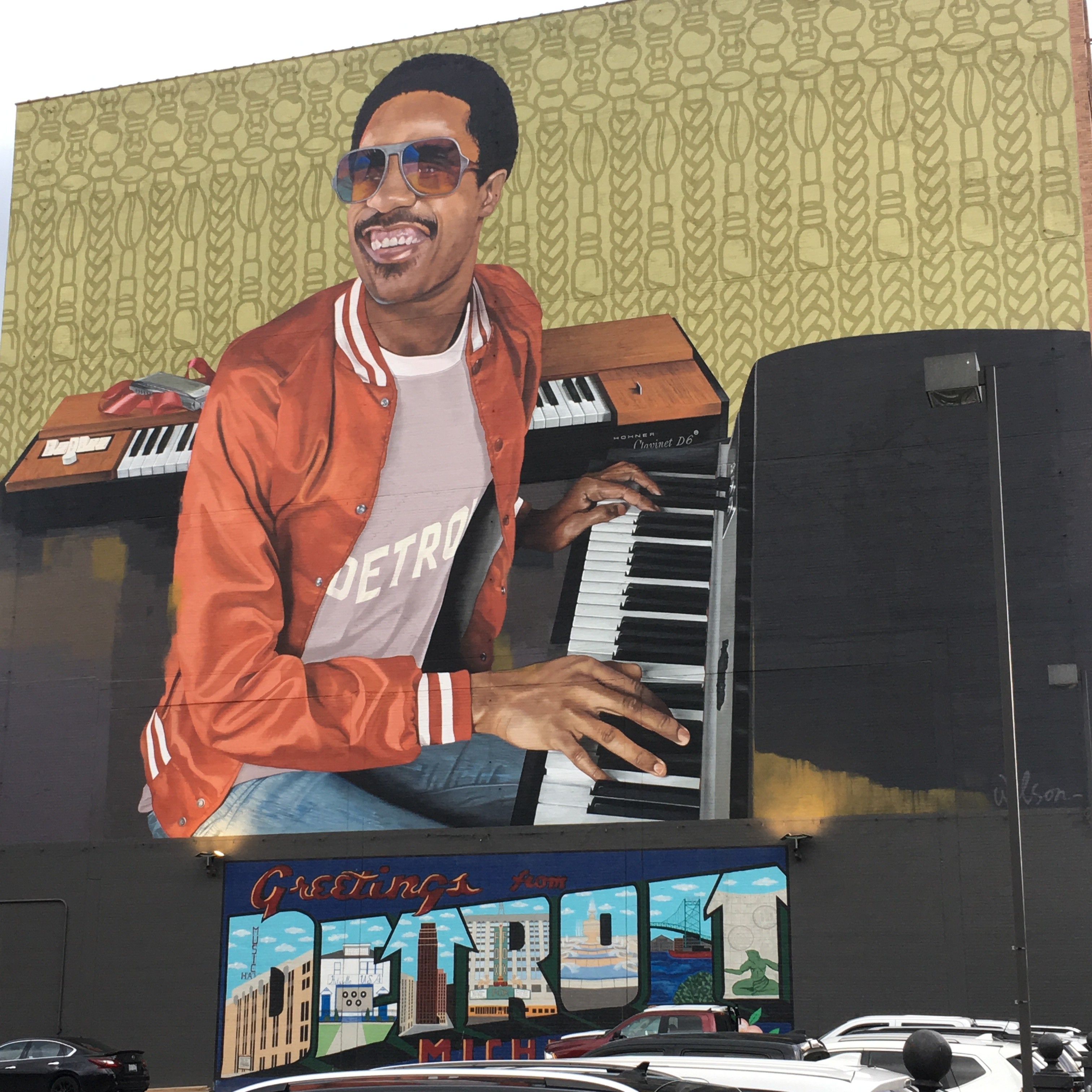 A mural of Stevie Wonder in downtown Detroit.

WHEN I travel to other places, I like to keep an eye out for good ideas which might also help improve things back home.

Savannah is notoriously insular. We have a long-standing, unspoken and unwritten rule to avoid at all costs any good ideas from other cities, and to try instead to reinvent the wheel ourselves whenever possible.

This has historically been one of our weak points, economically and culturally.

Occasionally I write travelogue columns along this line, and I wanted to do the same about my journeys to the unjustly maligned, vastly underrated city of Detroit, Michigan.

Most Americans know Detroit from the endless series of negative stories in the media, many of which amount to little more than propaganda — much of it blatantly racist.

For many, the word “Detroit” is a catch-all, almost generic pejorative referring to economic and educational decay and depression.

But just about anyone who has actually visited Detroit lately knows that the city — especially the downtown area — has made leaps and bounds over the last decade, economically, culturally, and in quality of life.

This summer I visited Detroit for the wedding of two friends. The last time I’d been there was only three years ago — but even in that short span of time I could see how quickly things are changing there, mostly for the better.

Stretching along the Detroit River, directly across from Windsor, Canada, there is a Michigan state park which since 2009 has featured an entire section of fully restored wetlands reclaimed from post-industrial blight.

That riverine state park is one part of a more than three-mile multi-use river walk, which reminds me of Atlanta’s successful BeltLine project — a well-populated community resource used by locals, visitors, young people and families alike. 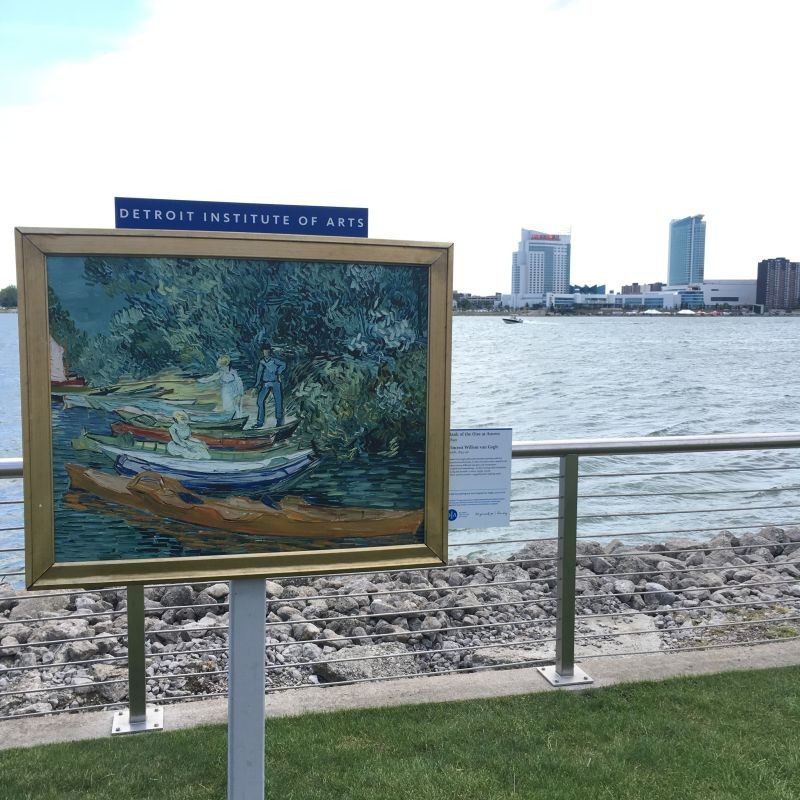 Installation overlooking the Detroit River, promoting a Van Gogh exhibit at the Detroit Institute of Arts across town.

Marketing techniques tie together cultural and economic resources. There’s an installation overlooking the river promoting a show across town at the Detroit Institute of Arts, for example, along with interpretive signage on the history and importance of the Great Lakes shipping industry.

Imagine public art installations along the Savannah River, cross-promoting the Telfair Museums, the Beach Institute, the port of Savannah, and other local sites and offerings. You could do the same thing on the Springfield Canal, if and when the Canal District and Arena are completed.

No need to reinvent the wheel—there’s a creative, cost-effective idea for the taking.

A private/public partnership has made the park an award-winning, well-utilized urban recreation area, with a “beach” for the kids, and food/bar options for adults.

In many civic parks in Detroit such as this one, you see private security rather than police, which cuts down the burden on taxpayers and on an already overburdened police force (sound familiar?)

This of course, requires literal buy-in from corporate sponsors. Ask yourself: Do you think Savannah’s largest employers as a whole do enough of this kind of win/win community buy-in?

With the recent move of the Detroit Pistons out of the suburbs, all four major pro sports in the Motor City will now be played in facilities within a short distance of each other downtown, for the first time since 1974.

There is a huge and well-attended downtown farmer's market, Eastern Market, yet another successful civic-oriented private/public partnership. The Detroit Lions are the lead sponsor of their access program, specifically intended to relieve food deserts in less affluent areas of the city.

Notice a theme? The Detroit renaissance is fueled in large part by corporations putting their money where their mouth is, and recognizing the win/win situation of investing in community revitalization.

A historian might tell you that this is arguably the whole story of Detroit in a nutshell, from its days as a powerhouse of industry and the labor movement. 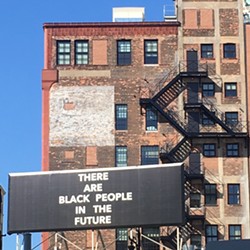 But the main thing to notice about Detroit isn’t anything visible, but rather a feeling. There is real civic pride in Detroit nowadays, from the grassroots up.

It’s a pride that not only defies the national media stereotype, but sometimes even thrives on it — in the manner of bulletin-board material firing up a disrespected underdog football team.

You can tell a lot about a city by its Uber drivers. In Savannah, many don’t even live here full-time, and are clearly unfamiliar with even the most basic routes.

In Detroit, every Uber driver I’ve had has been an unofficial tour guide, eagerly telling me about all the cool things to do and see, with little or no prompting.

In all, it seems like the folks who decided to stick it out in Detroit through its bad days have crossed multiple barriers to bond over their shared dedication to community —and are now doubly grateful for the good days. 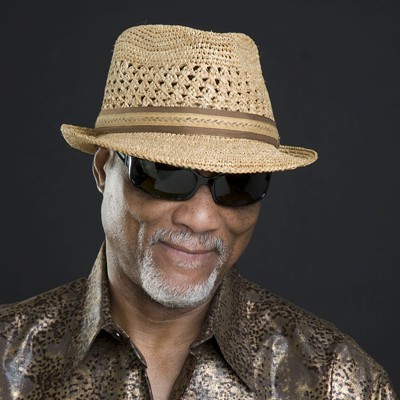 The Temptations and The Four Tops @Savannah Civic Center

A Motown Christmas @The Lucas Theatre for the Arts