Editor's Note: Oops! Arena may not have been approved by voters twice

AS MORE light and scrutiny shines on the Savannah Arena project — including our five-part series over the summer by Marcel R. Williams — the Arena’s defenders have also upped their game.

The newest defense is the notion that “The voters approved the Arena — twice!”

That’s a reference to the fact that the Arena will be funded by sales tax revenue from two rounds of SPLOST (Special Purpose Local Option Sales Tax), voted on by the public every 6-7 years via referendum.

We see this defense repeated as a mantra by many of the project’s most vocal supporters, including First District Alderman Van Johnson, in whose district the Arena is set to go.

I have long opposed this style of local governance — which is almost a form of victim-blaming — because sometimes it’s just an attempt to shift accountability for capable leadership back onto the voters.

In our system of representative democracy, voters specifically elect leaders to oversee complex and costly projects of this nature, based on the premise that ordinary citizens don’t always have time, energy, and/or expertise to do all the work.

But if everything’s up to the voters, why do we need politicians at all?

Westside Arena: a 50-year mistake?: Part One, an Overview: Parking, transportation, and flooding are just some of the issues facing the massive proposed project set for the new ‘Canal District’

More to the point, the defense of the Arena in this case isn’t even accurate.

Former Chatham County Commissioner John McMasters — one of many vocal opponents of the Arena as currently envisioned — sought to settle the debate by researching the exact ballot language used to fund the Savannah Arena.

It’s been a long time, and candidly many of us, myself included, couldn’t remember exactly how the ballot read.

McMasters went straight to the source — the Chatham County Board of Elections — and found sample ballots from 2006 and 2013, the two rounds of SPLOST which involved funding the Arena.

What he found, and what the ballots show, is that:

• It’s certainly not true that they approved the Arena as now envisioned: an anchor to extensive (and non-SPLOST funded) development specifically on Savannah’s westside. Despite what many Arena supporters claim, voters were not told where the Arena would go, nor what it would cost.

The first round of SPLOST funding an arena says just that: "an arena." No mention of cost or location.

If you look closely at the ballot language from 2006 — the first time voters weighed in on the Arena — it simply says that $445,300,000 is to be collected from SPLOST for a wide range of projects, from the new jail and courthouse expansion to drainage projects.

The Arena project gets all of two words: “an arena.” That’s it. “An arena.”

No mention of where, nor how much of the $445 million is to go to build it.

But the real surprise comes when we look at the actual ballot language from 2013, for the next round of SPLOST.

The Arena is not mentioned at all.

Note the conspicuous absence of the word “arena.” 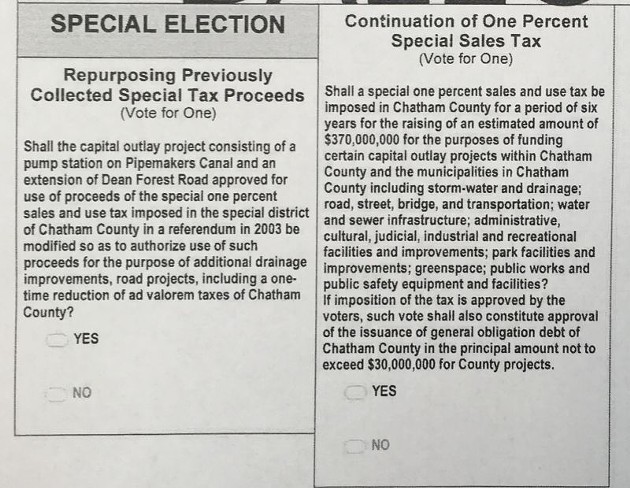 Above right: The 2013 SPLOST referendum didn’t mention an arena at all.

Advocates will of course refer back to the approved list of SPLOST projects for that year, and say the Savannah Arena is included in “cultural facilities,” or perhaps “public works,” or both.

But if the claim is that voters approved the Arena twice, that’s tenuous. The ballot language is vague at best, and at worst could be interpreted as actually excluding an arena.

Another mantra of Arena advocates is some variation of the line, “The decision by the voters is binding and it’s against state law to change or cancel SPLOST projects once they’re voted on.”

This is also not entirely accurate.

As McMasters points out, on the same ballot in 2013, there is another referendum titled: “Repurposing Previously Collected Special Tax Proceeds.”

You might want to read that one more time and let it sink in.

That’s right — you can hold a whole separate referendum on shifting SPLOST funds from one project to another.

In this case from 2013, it involves redirecting funds approved by voters in 2003 for a pump station on Pipemakers Canal.

So we see that it is categorically untrue that SPLOST funds, once approved, cannot be redirected to different projects.

Getting down to brass tacks: Is it likely that the Savannah Arena will be moved, revoted, or even canceled outright?

Of course not. Not without a sustained, brutal political battle, anyway.

But regardless, it’s important to set the record straight so we can more clearly and honestly debate the issue.