Editor's Note: Signs of optimism amid the chaos? 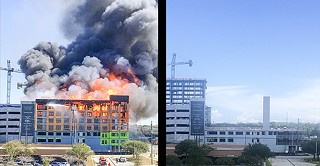 FIVE MONTHS AGO this week, part of the new development at Eastern Wharf burned in a massive and horrifying blaze.

At the time, most of us thought that was probably the weirdest thing we’d see all year. Instead it turned out to be just a harbinger of sorts, a grimly symbolic hint of what the rest of 2020 had in store for us all.

When the fire was still fresh, the most prevalent reaction was that perhaps that site, just to the east of the Historic District, was under some sort of curse – its former incarnation, Savannah River Landing, falling victim to the last national recession.

However, if you drive by Eastern Wharf today, the signs are a bit more sanguine.Restoration has begun on the residential portion destroyed in the fire. I’m no construction expert, but it appears to be at about the same point as before the blaze.

In addition, the new hotel planned for the site – a Hyatt – is rising very quickly.

It might be the height of optimism, pun intended: A new hotel being built, in the middle of all this (gestures around at everything going on).

Perhaps counterintuitively, you can find lots of optimism in Savannah these days.

City finances, of course, look quite different than what we expected a year ago. That said, the forecast is perhaps not as dire as you’d think.

Last week, Savannah City Council was briefed on the potential downturn in tax revenue. The hit to the General Fund is “only” expected to be about $13 million through the end of the year – about a 6.5 percent decrease in revenue.

While I find the figures perhaps a bit optimistic, let’s compare to what we know is going on elsewhere.

Cincinnatti, Ohio, a city roughly twice Savannah’s size, had already temporarily laid off a quarter of its City employees at the start of the pandemic. Savannah hasn’t instituted any employee layoffs.

Cincinnatti will have to close a $70 million hole over the next year, more than five times the size of Savannah’s hole.

Savannah City Manager Pat Monahan has a five-tier plan to address our, much smaller, shortfall. Hopefully, Tier One will be all he has to mobilize: A 1-3 percent cut in operations, combined with eliminating City positions through attrition.

The tiers get more severe of course; the furloughs would come in Tier Four.

Tier Five would involve layoffs, a large tax increase, and privatization of services.


IN OTHER NEWS, Savannah has lost another of its true originals: Joe Holmen, who through force of personality helped form the quirky, creative, and individualistic cultural milieu that has come to be our city’s calling card to the outside world.

While most of the widely shared obits in town involve elderly philanthropists or preservationists, Joe was more at home behind a bar, or on a stage playing and singing rock ‘n’ roll.

Joe was the textbook definition of the word “irascible,” and his combination of blunt truth-telling, laidback personality, and ability to bring people together over tunes and fellowship will be sorely missed.

His personality and talent helped forge the classic culture of downtown Savannah that the city has traded on, long after most of that culture was priced out, and cast out, of downtown itself.

We raise a bottle of Bud to Joe — his like will not be seen again.