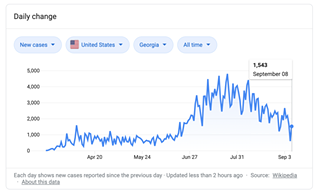 IN a few days Savannah will mark six months since the St. Patrick’s Day Parade that didn’t happen.

At the time, canceling Savannah’s largest single event seemed like the biggest blow the city could receive.

Now, it seems more like six years ago than six months.

As the time passed, we quickly began worrying more about getting sick and dying than about parades.

We worried more about losing our jobs and/or getting kicked out of our apartments and houses than whether the local tourism industry would come back.

We waited in line for several hours to get tested.... so we could wait several days to get the test results.

Why did we bother getting tested again?

We sadly counted the beloved local spots that would never reopen... the Jinx, Atlantic, our cover subject Larry’s, to name just a few.

There are more to come, no doubt.

All guilty of the crime of being in the wrong sector of the economy, an economy left to rot with a laughably small amount of relief from a federal government that doesn’t bat an eye when Wall Street needs a trillion dollars to keep it afloat for a single afternoon.

We did each get $1200 from the government, or most of us did, anyway. We kidded ourselves that more help — what some of us decided was “socialism” — might be on the way.

Those of us that suddenly found ourselves having to deal with the state Department of Labor now understood all the complaints we’d heard over the years from those less fortunate or privileged than us lucky ducks who had jobs.

Turns out they were right the whole time. The state doesn’t really want you to collect those benefits to which you’re entitled, makes it as hard as humanly possible to get them.

Meanwhile —breaking news —the rich got richer. Shocker, I know.

Billionaires increased their wealth by $970 billion during the recession, by 33 percent, while over 30 million Americans are unemployed.

The world’s richest man before the pandemic, Jeff Bezos, got much richer during the pandemic. His personal wealth has increased by $94 billion as of this writing.

(Bezos is so rich that his ex-wife, MacKenzie, has now become the world’s richest woman — simply due to her divorce settlement with him.)

The stock market hit all-time highs during the worst economy since the Great Depression. That should tell you a lot, about a lot of things.

We fought over masks.

Wow, did we fight over masks.

We debated over whether and how soon the economy should “reopen,” and for whom. What was appropriate? What was in bad taste? What was essential?

Bars that didn’t serve food had to shut down for months. Bars that served food could open, however.

The virus is driven away by food? Who knew?

Elderly and sick people died in ICUs and nursing homes all alone, all over the country, due to strict visitation restrictions. Couldn’t even get last rites.

Megachurches? They could stay open and keeping passing the plate.

Outdoor funeral services had to be limited capacity, or postponed indefinitely.

The virus knows the difference, apparently. Quite a virus, that COVID-19. Smart.

Turns out everybody’s gotta eat, and there’s no way around it. So grocery stores stayed open, masks or no masks, no questions asked.

We lionized their employees for a few weeks to make us feel better about it all, but most of them never saw a pay raise.

One of the world’s great social movements happened during the pandemic, during this recession.

How much actual change has come out of it? Too soon to tell, but the conversation quickly shifted away from police reform and doesn’t seem to have come back to it.

As the pandemic settled in, people did what people do, and started congregating with like-minded people and patronizing like-minded businesses.

The people that didn’t care about masks, or didn’t even believe there was a virus, tried to do whatever they wanted, and sometimes got very mad when they couldn’t.

Others stayed home nearly all the time, whether immunocompromised, from fear of spreading the virus, from being generally fearful, or all of the above.

People were shamed for not wearing masks, and for doing things.

People were shamed for wearing masks, and for not doing much of anything.

Lots of shame in all directions. Didn’t do much but make a country full of people who basically already hate each other, hate each other that much more.

Other countries, meanwhile, quietly got their act together. Many already moved on some time ago.

Tiny, powerless Greece — with a population about the same as the state of Georgia, and arguably the most dysfunctional democracy in Europe — got the better of COVID-19 as mighty America struggled.

The one thing most of those countries that got a handle on the virus had in common was... not letting Americans in anymore.

We built a wall, all right.

College campuses are reeling from new, entirely predictable outbreaks, with colleges blaming the students rather than their own unwise leadership.

No news on a vaccine, and who knows how many people would actually take one?

The U.S. Congress remains AWOL on most issues, including economic relief. Basically took the summer off.

The presidential election may come down to how accurately mail-in ballots are counted. Did I mention that we don’t even know if the Postal Service will survive?

The local economy seems to be dipping its toe back in the water. Or given the huge Labor Day crowds, perhaps diving into the deep end is a more apt description.

Hopefully not too many more beloved institutions will give up the ghost.

Michael Gaster has done his 50th Quarantine Concert! A groundbreaking livestream venture I think we all thought wouldn’t be needed longer than two or three months.

The much-maligned Arena project didn’t stop, or even really slow down, for the pandemic. It is being built as we speak —a live venue for a time when the future of live events is entirely unpredictable.

Our Mayor continues tirelessly promoting mask usage like it’s still June, even as the autumn economy seems to be bursting at the seams to “reopen,” come what may.

And another City Council is at each other’s throats over petty disagreements.