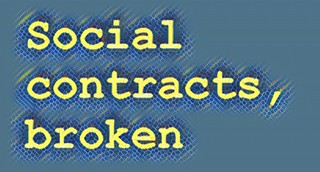 MANY of us are advocating for a wide range of very important issues during this time. Major societal shifts are underway.

But arguably the most important thing we can advocate for this particular month is for Congress to extend the $600 a week unemployment benefit, upon which really everything else currently depends.

As I write this, Congress has yet to do so.

It might be the most important thing no one is talking about.

It is hard to overstate the abyss this country faces if these payments aren’t extended past July 31. With the current trend, if the pandemic continues to worsen, most people reading this could be out of a job by the end of the year.

You thought we had civil unrest? You haven’t seen civil unrest until maybe 8 out of 10 Americans are not only out of work, but broke, hungry AND evicted/foreclosed.

At the height of the Great Depression, the unemployment rate was roughly 25 percent.

At that time, the United States was primarily an agricultural nation, and your food supply chain might largely consist of local farms, or even your own farm.

Today, if you count what are called “marginally attached job seekers,” we have already surpassed that unemployment rate.

Most Americans today live in urban centers, completely dependent on, yet personally divorced from, an elaborate — and easily disrupted — supply chain for the most basic sustenance.

If the pandemic continues to spike, as seems to be the case, we may have just seen the tip of the iceberg of business closures and layoffs.

I don’t think many people sufficiently appreciate the economic catastrophe that will arrive if the virus isn’t contained, and soon.

This is another example of broken social contracts, an idea I’ve become very interested in lately.

Broken social contracts lead not only to a broken society, but often to literal breakage and violence, as a profound sense of betrayal causes extreme alienation and frustration.

The list of broken social contracts this year is a long one — so long it’s difficult to keep up.

There used to be a social contract that police wouldn’t murder people, for example, with police generally given a level of trust commensurate with the immense power they’re also given.

But that’s a contract that’s been broken so many times, so egregiously, and in such a one-sided way, that it has spawned a global movement.

There used to be a social contract that people would be expected to do the baseline minimum to protect other people during a massive crisis — such as, say, the simple act of wearing a mask to possibly keep others from catching extremely contagious new virus.

But as we can see from the number of people who not only refuse to wear a mask, but who seem to be almost sociopathically indifferent to the damage caused by not wearing masks, that contract is shattered.

Many businesses are now so frustrated by the Great Mask Wars that some are closing — not because the government ordered them to, but because so many customers arrive not only refusing to wear a mask, but berating the staff for complying with mask orders.

Service workers are some of the most vulnerable people in our society to the virus, given their line of work. And some members of the public are, essentially, actively trying to get them infected.

This represents a horrendous societal breakdown, a lack of empathy so complete as to be terrifying.

As bad as that is, to my mind the most fundamental and wide-ranging breaking of the social contract was when our state economies were shut down to various degrees — a logical move— but our government refused to honor its end of the deal by providing adequate financial relief.

People and businesses were required to sacrifice, in some cases, all they had, and got little to nothing in return.

Adding insult to injury, many of the entities that did receive relief appear to have done so because they were politically well-connected.

Meanwhile, most other countries long figured out the importance of that social contract.

When a nation like Greece — in modern times arguably the worst-governed democracy in Europe — is vastly outperforming the United States in controlling the pandemic and is already moving on from it, you know we’ve got a problem! Not to take any credit away from the Greeks.

What’s worse, with the huge spike in infection rates after “reopening” our economy, we see that the first 90-day shutdown was essentially a complete waste.

All those businesses lost, all those lives disrupted — largely for nothing.

We are now looking at probably the equivalent of another 90-day shutdown, potentially with financial relief being completely pulled out from under us this time.

The new shutdown will be even more haphazard as the last, as businesses frantically attempt to stay afloat while also keeping their staff alive.

Some of the structural changes due to the shifting economy will probably be good ones, for example the realization that most work can be done from home just as efficiently, if not more so.

The epiphany that productivity can actually rise when people don’t have to commute, get childcare, and spend all day in a cubicle — not to mention maybe facing sexual harassment in the workplace — is a powerful one.

But in most other ways, unless our government steps up, we seem woefully underequipped for the new reality.

The federal government is really the only entity that can fix this, as states are barred by law from deficit spending.

Anytime you hear someone say “We can't do that, it will cost too much money,” remind them that at literally no time in U.S. history has a major government initiative been halted because there wasn’t enough money.

Whether it’s the New Deal, the G.I. Bill, the Manhattan Project, the TVA, the space program, the Cold War, a massively expanded surveillance state, or several decades of continuous Middle Eastern wars, the federal government has never let money get in the way of something it wants.

What’s missing now is not the money, but the will.