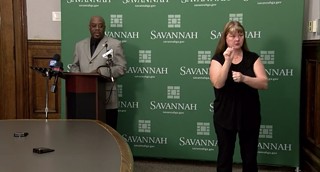 ABOUT A MONTH AGO, on March 4, Michael Bloomberg dropped out of the presidential race.

Savannah Stopover was March 5-7. That last full-on Savannah party weekend, free of any restrictions whatsoever, seems like it was in a different decade.

Even the St. Patrick’s Day in Savannah without a parade — only a couple of weeks ago — seems like a distant dream.

And our social distancing, quarantining, and isolation has really only just begun.

Nobody knows how long this will last, exactly, and no one truly knows what our city, or the world, will look and feel like when we finally see the other side of this.

One thing we are able to get a handle on, especially with many of us having a lot more time on our hands, is the relative effectiveness of our various elected leaders, during the most trying possible time for an elected leader.

The contrast has been striking. I hope people are taking notes to refer back to in the future.

At the national level.... where to start?

However, Savannah has an equivalent in the person of Mayor Van Johnson, who has taken to a modern-day version of the fireside chat with his frequent Facebook Live sessions.

The Mayor’s combination of pragmatism, firm determination, and compassionate and often very humorous communication skills are tailor-made for this moment.

If there has ever been a situation in Savannah where a leader has walked onto the stage seemingly at precisely the perfect time, this would be it.

While Johnson was originally on the hottest of hot seats — having to decide whether or not to cancel the St. Patrick’s Day Parade — he passed that test with aplomb.

While Johnson came under criticism for being slow to act on closing restaurants, he was still miles ahead of any other local leader on that front.

Johnson is, of course, not alone in governing the City of Savannah, and he can share some of the credit.

While most of the business of the City has slowed to a crawl — literally, in the case of the local service industry — Savannah City Council seems united in providing for the safety and welfare of their constituents.

The contrast with some other local governments is clear.

After a frankly embarrassing series of initial missteps, Tybee Island seems to have finally found religion on the pandemic relief front, closing the beaches at last and shutting down all non-essential businesses.

That was after their own St. Patrick’s Parade not only went on, but went on despite an order canceling it.

That rogue St. Patrick’s parade — done in open defiance of the cancelation order — is certain to be mentioned the next time Orange Crush comes to Tybee, when locals try again to shut down that celebration.

(Tybee has a new Mayor too, in the person of Shirley Sessions, who, to be clear, did her best to keep that canceled parade from happening.)

In the wake of evidence that New Orleans’ decision to hold Mardi Gras is probably why Louisiana has the second worst infection rate behind only New York, Tybee’s error in judgement is no mere example of island residents’ legendary stubbornness — it has the potential of being a possibly fatal one.

The Chatham County Commission, by contrast, is notable not so much for its actions but rather for its comparative inaction.

Though legally a much more powerful official than the Mayor of Savannah, Commission Chairman Al Scott is increasingly regarded as a no-show by much of the public.

What steps the County has taken were all taken days behind Savannah’s, and in some cases — such as sheltering in place — still haven’t been implemented as of this writing.

Savannah has had a shelter-in-place order, with no restaurant dining, for a solid week now.

While the City of Savannah is the big dog on the block and can, and often does, go its own way, other municipalities in Chatham County tend to look at the county government’s lead more often.

And in this case, they didn’t have much to go on.

At the state level, Gov. Brian Kemp continues to confound with a constant stream of mixed messages.

On one hand, at least he has shown that he will take some action when prodded or shamed enough.

On the other hand, when someone on his staff does things like blaming media in the state for encouraging “hysteria” (yes, that actually happened), or ridicules local officials like Mayor Johnson for being "overly restrictive" (yes, that actually happened too), it undermines all the good work anyone else on the governor’s staff might be trying to do.

Other than closing down bars in the state, a much-ballyooed announcement from the governor on March 23 simply turned out to be another toothless request for social distancing.

A week later, we see that these polite requests simply aren’t working.

Whether it’s sports team gatherings in Forsyth or Daffin Parks, or large groups of boaters holding parties on beaches, or house parties spilling out onto the street, it’s clear that many, many of your fellow citizens either don’t know or don’t care enough about the importance of distancing to practice it.

Unfortunately, due to the nature of viral outbreaks, we are only as strong as our most irresponsible or ignorant citizen.

We are looking at several more weeks of this.

We can get through this.

But you have to hunker down for awhile longer.

It ain’t easy, but the alternative is worse, and will just make the quarantine that much longer, and that much more damaging in the long run.

In a time of unprecendented partisan disagreement, we simply have to agree on this.