THERE ARE a lot of lessons to be learned from the imminent shuttering of The Stage on Bay, a live music venue in West Savannah which has for all intents and purposes closed down — not with a bang, but with a whimper.

Unfortunately many people will learn the wrong lessons from the cautionary tale. 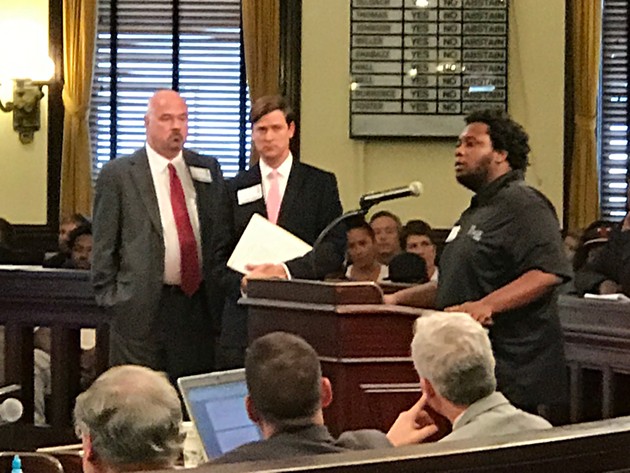 Stage on Bay owner Charles Schmitt, far left, during one of the contentious hearings last year over the venue's liquor license

The story began in early 2017, when City Council did its level best to keep the new business from opening in the Hudson Hill neighborhood.

Though owner Charles Schmitt satisfied all legal requirements for an alcohol license — a necessity for the venue to turn any kind of profit — Alderman Van Johnson and neighborhood leaders spoke out against it.

Only one alderman, Julian Miller, voted to allow the venue what it was entitled to by law. “This venue is a win/win somewhere else, but a lose/lose in this location,” Van Johnson said at the time.

Though the new business would revitalize a former warehouse in an impoverished area, much of the neighborhood seemed to feel that The Stage on Bay’s transient and irregular crowd, many of whom would be imbibing, was a bad fit.

Alderman Johnson’s First District is home to both The Stage on Bay and the future site of the Savannah Arena.

The core market for the Arena, which Johnson strongly supports, is also....... a transient and irregular crowd, many of whom will be imbibing, just as with The Stage on Bay.

Johnson certainly seems to have been right about his original assessment of the viability of The Stage on Bay. But what does that say about the Arena?

The difference of course is that the Arena is taxpayer-funded, government-controlled, will never go out of business, and will never threaten to sue the City, as The Stage on Bay was eventually forced to do in order to open.

Whether the Arena is a success or a failure, taxpayers will subsidize it for the next several decades regardless.

City Council to reconsider The Stage On Bay liquor license

To be fair, The Stage on Bay didn’t do itself many favors in the meantime.

Over the past few months, public confidence eroded massively each time the venue posted a cancellation notice just a few hours before showtime.

I say “almost,” because one of the things I’ve been struck by is the poignant hoping-against-hope of the music fans who followed the venue’s offerings.

While it’s been obvious for months that the venue was on life support, many fans remained in denial despite the flow of cancellations and various problems securing a refund through Ticketfly, the ticket vendor of choice.

The often-problematic sound system was also a major issue for patrons and bands alike. (If there’s one concrete practical lesson to learn from this, it’s to not cut corners on your sound system.)

On a lesser, but still relevant note: In an increasingly festival-driven live music scene where the selection of craft beer is sometimes almost as important as the bands, The Stage on Bay’s beer offerings were as stale and dated as some of the nostalgia acts they booked.

But in the end, The Stage on Bay’s main problem was probably the same issue that critics of the Arena point out: Its location off the beaten path.

I’ve read and heard many comments to the effect that, “Savannah won’t support live music. That’s just how it is here.”

Yet, our cultural scene is full of examples to the contrary:

• Savannah Stopover is a smashing success in the indie/alternative world.

• Revival Fest brings a crowd to the Railroad Museum for Americana/blues.

• The Savannah Philharmonic thrives here despite so many markets of this size failing to support any symphony orchestra at all, much less one of this high quality.

• Country shows packed in large crowds at Grayson Stadium this past summer.

What sets these successful live music entities apart? At the top of the list are:

3. Content is King: The talent booked is high-quality in its various genres.

If “Savannah won’t support live music,” how do you explain the above success stories, just off the top of my head?

But unfortunately, the way The Stage on Bay was treated by the City, combined with the mistakes made by the venue itself, will only serve to cement the long-held — if obsolete and unfair — notion in much of the industry that Savannah is a tour stop that is sometimes best skipped over.

Meanwhile, Savannah has lost an example of the thing that eluded it for so long: An all-ages live music venue of the type common in other cities but which is on par with a UFO sighting here (not least because of the city’s generally obsessive focus on alcohol consumption).

This kind of venue is crucial, even mandatory, in building and maintaining a true local music scene from the grassroots.

If there’s nowhere for young bands to play — or for aspiring young musicians to see bands they want to emulate before they turn 21 and are already off at college — the scene dies stillborn.

Elected officials and community leaders complain so often about there not being enough for young people to do here.

And then when that rare bird does come along — an honest-to-goodness, all-ages music venue — they do their best to keep it from taking flight.

The news isn’t all bad. There are a couple of new venues in the works in the Midtown area which might be able to more adequately fill the void.

Connect Savannah will be behind them in spirit, and will give them the same benefit of the doubt we extended to The Stage on Bay —which the City of Savannah government itself refused to do.