IN ONE of its last acts, the outgoing DeLoach administration did something that perfectly sums up the last four years:

They disturbed a precious, irreplaceable local civic and cultural resource to reward a developer, overturning a unanimous decision by a citizen board to do so.

If there’s anything more emblematic of the legacy of this administration, I can’t think of it.

The resource in question is The Waving Girl, the iconic sculpture of Florence Martus that since its creation in the 1970s has occupied a space on the east end of River Street.

The developer in question is Richard Kessler, of Plant Riverside, Bohemian, and Mansion on Forsyth fame. 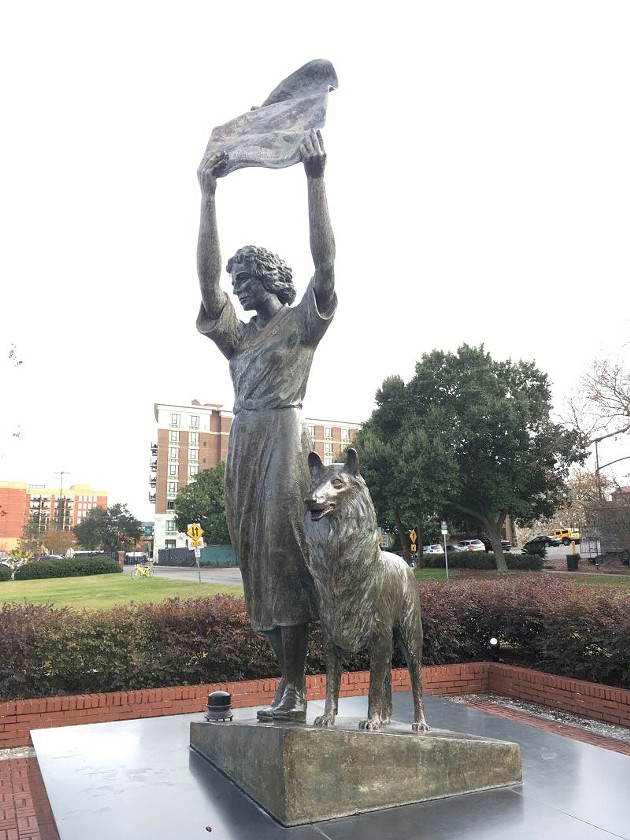 Perhaps coincidentally, perhaps not, Kessler was a key, maxed-out contributor to most of the outgoing Council members who voted to move the statue, including Mayor Eddie DeLoach.

The lame-duck Council voted 7-2 to move the Waving Girl to a display space — apparently already built! — near the Plant Riverside hotel/mixed-used development, all the way on the other end of River Street.

It’s important to reiterate that Council voted this way despite the unanimous ruling of the Historic Site and Monuments Commission against moving it — yet another volunteer citizen advisory board whose expertise and civic service was overruled in the name of development.

Common sense would say to delay such a decision until the next Council is in place in January, but in this case the rush to judgment seemed to have its own inexorable political logic.

And that’s another reason why the Waving Girl is so important: In a political environment where seemingly every statue, slogan, and even T-shirt provokes discord, she is completely inoffensive, completely free of problematic baggage, and promotes nothing but positive feelings among the public.

Which of course is why she’s now so desirable as a marketing tool.

For many decades, the real Martus waved to passing ships, first from her home on nearby Elba Island further down the Savannah River, and in later life from her home on the Wilmington River in Thunderbolt.

The stated reason for moving the statue was to increase its visibility from the Savannah River, the sculpture being specifically intended to greet passing ships, as the real Florence Martus did.

The statue was moved 95 feet back and away from its original site to make room for the much less-attractive Olympic Torch cauldron during the 1996 Olympics.

Defenders of the statue’s move say, correctly, that the Savannah Propeller Club has been trying to increase visibility of The Waving Girl basically since then. A laudable goal, for sure.

The obvious, no-brainer answer to this problem — since we’re already talking about moving statues around — is to simply swap the Waving Girl with the Olympic cauldron, putting Ms. Martus back in her original spot.

But at no point was this simple solution proposed.

Kessler himself spoke in favor of moving the Waving Girl to his hotel, admitting that he had financial interests in doing so, but that he was motivated primarily by having more people see and enjoy the statue.

He might be right, especially since more new hotel projects are set for the immediate area of where the Waving Girl is now. Both the Waving Girl and the Olympic cauldron seem to be “in the way” of current development plans.

But neither the vague promise of more foot traffic, nor hotel plans that probably should have received more scrutiny, are compelling reasons to move an iconic cultural gem such a great distance.

Who will pay for the move? The Savannah Propeller Club says that they and an unnamed private individual will pony up the cost.

Is Kessler the unnamed private individual? It’s a public monument, and the public has the right to know.

All that aside, what matters is that a citizen’s advisory board was overruled to benefit one particular project, and that the simplest solution to the supposed “problem” of visibility — putting the Waving Girl back in her original spot 95 feet away — hasn’t been proposed.

The gaslighting is frankly ridiculous, and has only served to further inflame public sentiment against moving the Waving Girl, an idea rivaled only by the proposed Fire Fee in terms of incredibly unpopular ideas from the last four years.

It’s important that two newly elected Council members, Alicia Blakely and Linda Wilder-Bryan, showed up to speak logically and forcefully against the move. That, I think, was a shot across the bow saying that the incoming Council might be willing to reconsider any number of unpopular decisions by the old one.

Significantly, Mayor-Elect Van Johnson was one of the two dissenting votes, along with Alderwoman Estella Shabazz.

(Blakely also serves on the Historic Site and Monuments Commission.)

I do understand that the new Council will have much weightier issues to deal with than statues: Affordable housing, a living wage for City employees, homelessness, filling a plethora of open staff positions, and hiring a City Manager, to name just a few.

But overturning this hugely unpopular decision would send quite an encouraging signal for the new year.