AS I write this, the much-feared "second wave" is firmly upon us: the new spike in COVID-19 infections we were repeatedly warned about as various states began reopening.

As was the case with Charleston, S.C. about a week ago, Savannah has begun its own list of food and beverage establishments voluntarily shutting down after employees tested positive for COVID-19.

Spanky’s Southside, the 5 Spot, the Shell House, the Starbuck’s on Victory, Service Brewing, Treylor Park, Hitch, and The Rail Pub have all voluntarily closed temporarily due to either staff or customers testing positive.

My guess is this is the tip of the iceberg, and many more will join them on that list.

Over the past few months we’ve talked a lot about the “new normal,” and what that might look like.

As of now, it looks a lot like this: A stutterstep reopening, with places briefly opening back up for awhile and then abruptly closing again, combined with long lines at free testing centers and frantic attempts to do your own junior contact-tracing.

Eventually, I suppose everyone will end up getting tested at least once, if not multiple times. Until a vaccine is available — and if enough people are even willing to take the vaccine, which is another story in itself — COVID-19 tests will probably become a routine thing.

And eventually, inevitably, some of those businesses will only be able to do the reopening dance for so long, and many will opt to simply close their doors for good as the money and patience runs out.

Savannah Mayor Van Johnson is poised as I write this to move ahead with an order for mandatory face coverings in public spaces in the City of Savannah.

While that is nearly the least our government can do at this point, it would no doubt run smack into the same irrationally fierce and stubborn debate which has now become painfully familiar — what I call the Great Mask War of 2020, which I’ve written about at length in previous pieces. 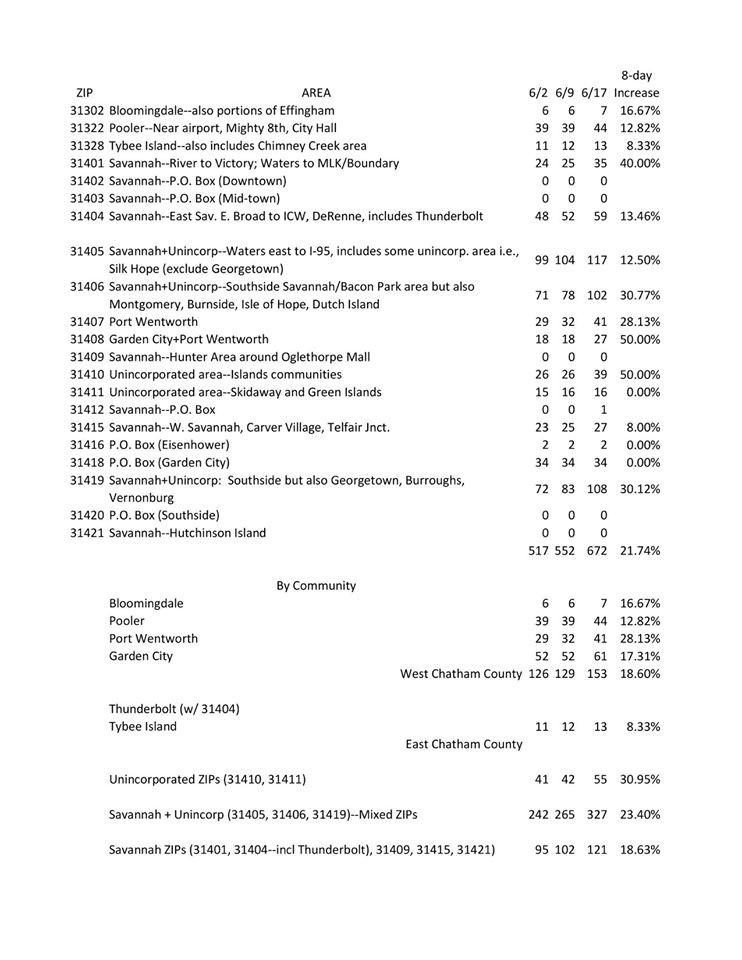 A table of COVID-19 infections by zip code of residence, not of place of infection.

And there’s the issue of who exactly will enforce said order, given the other great debate going on in this country, about the limits of police behavior and authority.

Some people are talking about the need for “another shutdown.” I have some news for them.

We only had one shot at a full shutdown.

We aren’t going to get another one.

The only way for us to have made that shutdown work — that one chance we had, and squandered — was to make it fast, complete, and provide enough financial assistance during the shutdown to make the sacrifice worthwhile.

Your federal and state government failed you on all those fronts.

There won’t — can’t — be another full shutdown.

Pick your metaphor. You can’t put that genie back in the bottle. That horse already left the barn. Pandora’s box is already open.

As bad as the situation is now, the only reason these businesses are pushing to open despite the medical threat is because they have to.

There wasn’t nearly enough help, or incentive, for them to stay closed.

So when Governor Kemp gave the green light, people pretty much had to go for it, whether they wanted to or not.

This is the dilemma small businesses in Savannah find themselves in:

Stay closed until everything blows over — later this year? 2021? 2022? — and basically be guaranteed to go out of business for good.

Or reopen now despite their misgivings about the virus, make a play for whatever money they can make, and hope against hope that no employees get sick and spread it around.

It’s an exceptionally cruel predicament to be forced into.

I feel for the business owners having to navigate this minefield that none of them signed up for, with virtually no one really having their back.

If there’s another serious shutdown, all bets are off in terms of who will have a job at the end of it.

Maybe only City Council members will.

Speaking of which: During this week’s discussion of the mask order, Alderwoman Kesha Gibson-Carter pointed out many of the overlapping dynamics at play.

“We should be mindful of... the implications if you’re caught without a mask. I would hate for us to make a blanket rule whereby all citizens have to wear masks and it becomes complicated,” she said.

“We’re in a time and space where there are concerns about police officers approaching [people] and what constitutes that engagement,” she said.

When she asked Mayor Johnson what the City could do to assist businesses which do the right thing and take on the additional financial burden of voluntarily closing, the Mayor answered “The City doesn’t mandate anyone to close. I don’t believe the City has the wherewithal to provide any assistance to a business that does close.”

While the Mayor is certainly factually correct, that is thin comfort for those who do their civic duty and close down at the urging of governments which offer them little in return for their altruism.

In the end, though, some things are simply beyond our control.

For example, the great flu outbreak of 1918 – usually inaccurately called the “Spanish Flu,” though it likely didn’t originate there at all – essentially ended on its own, and also featured an extended civic debate about wearing vs. not wearing masks.

Nearly as suddenly as it began, scholars say, the 1918 flu simply tailed off and went away, perhaps just running out of warm bodies that hadn’t already had it.

It’s too soon to say if that’s the case now. But if so, then it’s doubly important to support each other how, and when, we can. cs