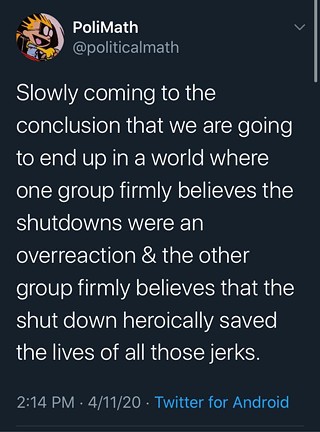 IT WAS TOO GOOD to be true.

It seems so long ago now. But a little over a month ago — when the pandemic got real and the shutdowns started in earnest — there was a sense, however brief, of mutual shared sacrifice.

We mourned economic loss, in the vain hope that our government would come through with adequate relief.

We mourned the loss of personal freedom, knowing it was for the greater good of a quicker, less painful recovery.

We shared Quarantine House memes, joked about how long our hair was getting.

And of course, we mourned actual loss of life, actual pain and sacrifice.

For a brief, shining moment amid the fear, there seemed to be a sense of community that we haven’t felt in this country for a long, long time.

We were “all in this together.”

Now, we most definitely are not “all in this together.”

Politics has reared its ugly, familiar head. The culture war has claimed another victim.

This time, not even the response to a global pandemic is free from the partisan divide. Not even close.

To be clear: We are all very upset that so many businesses have had to shut down, some of which will inevitably and unfortunately not be able to reopen.

We are all very upset that so many people have lost their jobs, whether permanently or temporarily.

We are all very upset that so many familiar rhythms of life have been disrupted.

No one actually wanted these things to happen.

The whole point is that it was a shared sacrifice, in order to get through this thing quicker.

But some of us have taken it on ourselves to not only be frustrated and annoyed by the new normal – which is understandable – but to aggressively push back against widely accepted public safety measures as some kind of assault on freedom, a tyrannical overreach, or even a hoax.

I don’t usually like to write about tweets, because that’s lazy journalism. But one tweet made the rounds a while back, and it stuck in my head:

This past week, that prediction came true somewhat, as small but well-publicized protests – many involving open-carry of firearms for reasons I’m not entirely clear about – took place around the nation, demanding an end to enforced shutdowns and often directly confronting healthcare workers.

In the light of a series of tweets from the president encouraging citizens to “Liberate” several states from lockdown, the firearms seemed to take on added menace.

It’s possible to make too much of these protests, which were comparatively small.

Then again, we’ve seen how quickly movements can take steam, whether through genuine grassroots support, or behind-the-scenes corporate/think-tank astroturfing, or a combination of both.

The shutdown protests this past week reminded me of similar protests against the Affordable Care Act a decade ago, which culminated in the “Tea Party” wave of conservative victories in Congress and in many state legislatures.

The 2010 Tea Party, while eventually paying large dividends for Republicans at the ballot box, had its origins in a single 2009 rant by a cable TV news personality, CNBC’s Rick Santelli.

Look it up! I’m not kidding.

(Future sociologists might find it an interesting coincidence that both the 2010 Tea Party and today’s version protesting shutdowns were dedicated to fighting enhanced healthcare outcomes.)

Like their progenitors, today’s protests are just another part of the culture war. They’re also being used as pawns and proxies, like most cultural issues that become fodder for political campaigns.

As in 2010, it’s entirely possible that, as seems the president’s intention, the current protests could take on a life of their own, making recovery from the COVID-19 pandemic that much more painful and difficult, and much more divisive and chaotic than it needs to be.

It's entirely likely that, as is often the case, no good deed will go unpunished. Governors and mayors who made the tough calls and came down on the side of public safety will probably be blamed for the future economic downturn -- when it was that very sacrifice that made the death toll so much smaller than it might have been otherwise.

And that was, after all, the entire point of the shutdowns. They were never a step that anyone actually wanted to take.

To be clear, I’m not saying it’s wrong to protest peacefully.

But if you’re of a mind to protest peacefully, here are a few targets which make a lot more sense than protesting medical science and public health measures:

• A Congress which passed a “relief” bill that was just another blatant corporate bailout — a bill which gave at most six percent of the promised funds to small businesses — and who then went into recess and disappeared for two months in the middle of a national emergency.

• A President who falsely claims “absolute authority” but won’t do anything with it; who squandered the weeks of time the public bought him through our sacrifice; and who demands that governors do more, and when they do, urges their citizens to “liberate” the state from them.

• State unemployment offices and websites which are woefully, criminally inadequate for the crushing demand of unemployment applications, whether by neglect or deliberate design.

• A Republican Party willing not only to mortgage its own future, but the entire country’s, to reelect someone who wasn’t even a Republican until a few years ago.

• A Democratic Party which fought harder against the left wing of its own party than it will ever fight against Donald Trump.

To name a few.

Again, I’m as upset as anyone by the widespread loss of employment, business success, and personal freedom.

Nobody who works at a newspaper could ever be happy seeing so many local advertisers in financial distress.

But if you are upset and outraged by the way things are, I’d suggest you take a deep breath and think long and hard about how best to register your protests.

If you decide to take up arms, perhaps literally, and fight another battle in America’s decades-long culture war, remember that you’ll likely be a casualty rather than a conqueror.

By definition, final victory in this struggle can never be claimed. In a culture war, we all end up losers.