Kinder Morgan to expand LNG facility with more trucks, tanks and tonnage than ever

For more info, go to pscoalition.org. To file intervenor status on the Elba Island Expansion Project, go to 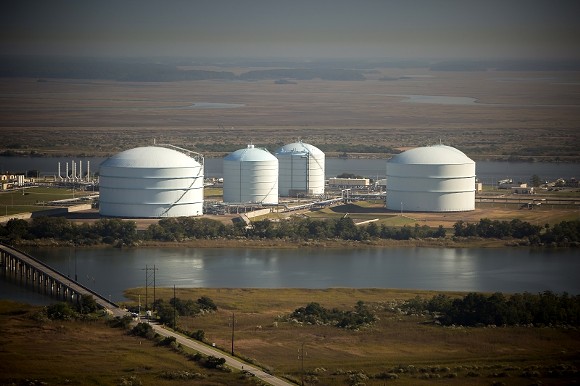 THE VIEW of Elba Island is about to get a lot more crowded.

In 2013, Kinder Morgan (KM) announced plans to expand the liquefied natural gas (LNG) facility located five miles from downtown on the Savannah River, which it bought from El Paso Corporation in 2010.

Earlier this month, members of the local Sierra Club shared the KM proposal filed with the Federal Energy Regulatory Commission (FERC) that reveals the hard details of what it will take to develop the site from an import-only facility into a full-service plant capable of liquefying and exporting 4 million tons of LNG per year.

According to the proposal, the prominent cluster of blue tanks will soon be joined by 10 liquefaction units, anchored by pilings driven 100 feet below ground.

Also in store for the 840-acre island are 11 new buildings, including one for hazardous material storage, plus a a new network of paved roads and a marked increase in lighting and noise.

“This is basically changing the entire geography of the island,” says Coastal Georgia Sierra Club researcher Stacey Kronquest, adding that the $1.5 billion project will have a significant impact on the surrounding wetlands.

The expansion is also changing the overall function of the facility: Built in the 1970s to regasify already liquefied natural gas imported from foreign markets and pump it out via pipeline across the U.S., Elba Island will now reverse its purpose.

Up to 2.5 million tons of domestic natural gas will flow through the pipeline and be liquefied on site, requiring an entirely different set of equipment and chemical refrigerants than previously utilized. 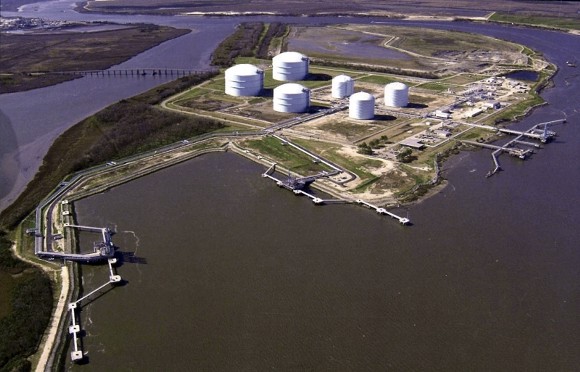 The LNG will then be shipped out via tankers to foreign markets instead of in, a market reversal dictated by the massive increase in natural gas harvested in the shale basins of the Midwest and other parts of the U.S. and extracted by the controversial process known as fracking.

Kronquest, a writer and Savannah-based professor who teaches at the University of Maryland, has been closely following the operations at Elba Island since the last expansion 10 years ago.

She obtained Kinder Morgan’s latest resource report directly from federal regulators, who are currently reviewing the project’s economic feasibility and its plans to transport equipment and materials to the island.

“I read FERC documents for fun,” she laughs.

At the Oct. 14 presentation, Kronquest raised other concerns relayed in the 1000+ page report, including the tripling of electricity used by the facility and a 700 percent increase in carbon and greenhouse gas discharge.

According to the FERC report, the project will result in emissions increases exceeding provided thresholds, and “a major NSR [New Source Review] analysis is required for these air pollutants.” The New Source Review is a permitting program under the Clean Air Act.

Among the report’s most disconcerting statistics were the staggering 10,000 trucks a month cited for the first year of construction to deliver materials—roughly 330 vehicles a day traveling along Bay and President streets and the Truman Parkway.

“They’ll tear those roads right up,” commented one attendee.

Kinder Morgan representative Melissa Ruiz assures that those numbers are a “maximum case” scenario and many of the vehicles could originate from local suppliers.

“It represents a rough estimate of truck activity during construction,” wrote Ruiz in an email.

“Kinder Morgan has been investigating and will continue to investigate other forms of transportation such as water transport to reduce traffic to and from the facility. As with any large construction project, there will be traffic congestion, but Kinder Morgan is working on ways to mitigate the congestion.”

Estimated truck traffic will drop to approximately 2800 per month in the second year of construction. A table in the report favors a combination of road, barge and shipping methods to minimize local impact, though it says that “trucking is anticipated to be the most prevalent form of material delivery into the Elba Island Project site and/or the specified project laydown areas.”

(Kinder Morgan, based in Houston, is also the company behind the proposed Palmetto Pipeline that has garnered major opposition in Georgia and South Carolina. The Palmetto Pipeline is unrelated to the Elba Island expansion, and KM is currently appealing its denial for a Certificate of Public Convenience and Necessity by the Dept. of Transportation.)

As apprehensions related to the building of the new Elba site mount, ongoing concerns about public safety continue. Some believe the site is vulnerable to terrorist threat, while others have focused on risks associated with operations.

Kronquest has studied El Paso’s semi-annual operations reports starting from the last expansion in 2006 through 2010, when Kinder Morgan took over and reports were no longer made public.

“Reading through them, you see how many things happen there,” she says. “You see unexpected shutdowns, valve leaks—a number of documented near-misses, like when the wake of another ship jostled one the LNG tanker while it was being loaded.”

Also at issue is the age of the existing infrastructure.

“The thing that has always been a red flag for me is the age of the original tanks, which were built in the 70s and are now going on 40 years old,” says Kronquest.

Built before modern safety standards, the three original tanks at the site rely on surrounding berms to contain leaks and impound evaporating vapors.

“What’s interesting about it is that the one expansion FERC has turned down over the years was because of the impoundment issue,” says Kronquest, referring to the 2005 effort to expand a similarly antiquated LNG storage facility in Providence, Rhode Island.

Once the Elba facility is finished, daily operations will require regular truck deliveries of chemicals used in the liquefaction cooling process, including propane, ethylene, liquid nitrogen and aqueous ammonia. These materials add to the potential of what environmental policy expert Dr. Simona Perry calls the “vapor cloud explosion element.”

A Savannah native and vice president of the Pipeline Safety Coalition, Perry has joined the Sierra Club effort to raise public awareness about the possible impacts of the Elba Island expansion.

“Liquefaction is an inherently riskier process, because you’re using other highly flammable gases,” explains Perry. “If you’re not careful, those interactions can result in an explosion.”

LNG is not flammable in its liquefied form, though it does have the potential to ignite as a gas when it collects in a finite space.

The fear of spilled LNG becoming trapped in sewers caused public outcry about plans to truck the material through Savannah in 2010, but Perry says that the chemicals used in the export process that pose an even greater danger.

Perry cites the explosion at an export plant in Skikda, Algeria that killed 30 and injured 70 more in 2004. While the Skikda terminal used different infrastructure than those planned in the U.S., that tragedy caused the DOT to develop new regulations regarding liquefaction facilities.

“Elba has sent fire fighters in the past to the advanced LNG Fire Fighting School and will continue to work with local first responders on training activities and work with both fire departments to modify existing emergency response plans for the new facility,” writes KM’s Ruiz.

Last Tuesday, Kinder Morgan hosted a workshop for first responders and emergency managers to learn more about the proposed changes at Elba.

“Open communication regarding emergency preparedness and response is crucial in the interest of public safety,” says Ley.

She adds that the addition of liquefaction will not change the emergency notification response protocol at Elba Island and will continue follow the county code authored by the Local Emergency Planning Committee (LEPC) in 2000.

“In the event of an accident involving a substance of a reportable quantity, the reporting party will notify 911 and dispatchers will then notify first responders. This process allows the reporting party to focus on the issue at hand,” clarifies Ley.

Kinder Morgan's Elba Island public safety plan is not available to the public.

According to industry database Global LNG, the United States currently has only one liquefaction facility in operation on Alaska’s Kenai Peninsula. Four more are under construction, including one in Freeport, La. Fifteen more are planned or under study, most of them clustered along the Gulf Coast.

On the East Coast, FERC has already approved plans for LNG export terminals in Jacksonville, Fla., and Robbinston, Maine.

FERC will issue its environmental assessment for Elba Island in February 2016 unless it agrees to the Sierra Club’s request a full environmental impact statement.

“The EIS required of the last expansion was the size of a phone book, and that was only to build one additional tank,” says Kronquest. “I think this is worthy of a closer look.”

As of now, Kinder Morgan expects to begin construction in May 2016. An EIS could delay Kinder Morgan’s plans to expand Elba Island by at least two years. But it will take the effort of local citizens to convince regulators that more investigation is needed.

“FERC decisions are based on cost,” explains Perry. “They want to look at what the cost to the nation is of building or not building this infrastructure, and people can comment on whether they think this a public convenience and necessity.”

Much of the work Perry has done with the Pipeline Safety Coalition is to help local communities claim their stake in multinational projects by filing for “intervenor status” through FERC.

The regulatory commission encourages public input on its website, and intervenors can receive all official documents filed for a particular case to stay informed.

“Becoming an intervenor gives people a way to be involved in the process and keep track of what’s going on,” explains Perry, adding that increased public participation led FERC to slow down permitting for an interstate pipeline in Massachusetts earlier this year.

She also encourages citizens to contact their local officials and state representatives about the proposed changes coming at Elba Island.

“FERC argues that it’s a geopolitical tool and it’s in the national interest,” she says.

“If there are enough people who can chime in on what they think about that, they might change their tune.”

Multiple victories for the environment