OVER the years, Savannahians have seen Sarah Poole perform solo, strumming an acoustic guitar in cowboy boots and cotton dresses. But even though the folk-pop stylings of Jewel inspired her to pick up a guitar, Poole is a rock girl at heart.

“I also grew up listening to Nirvana, Alice in Chains, Hole—I just loved that stuff,” she shares. “It was always there, but I never tried to write like that.” (Though, she admits, she did have an eighth grade emo phase.)

Now, Poole and her band, Ember City, are releasing their first record of deeply catchy alternative rock. The group—vocalist Poole, guitarist Ryan Taito, drummer Matt Frison, and bassist Avery Willis—celebrates with a release party at The Jinx this weekend.

The project was officially founded in February 2016, but the idea was planted early on. Back when she was exclusively playing solo gigs, Poole occasionally called her guitarist boyfriend, now husband, Taito, onstage to accompany her on lead.

With the addition of electric guitar, Poole began picturing a full sound and collaborative songwriting process for the future.

“I just wanted a band,” she says simply. “For all of my solo recording projects, I’d write the songs by myself, acoustic, and hire session people to come in super-fast and write and record parts. I thought, ‘It would be cool to have a band and decide what I want everything to sound like.’” 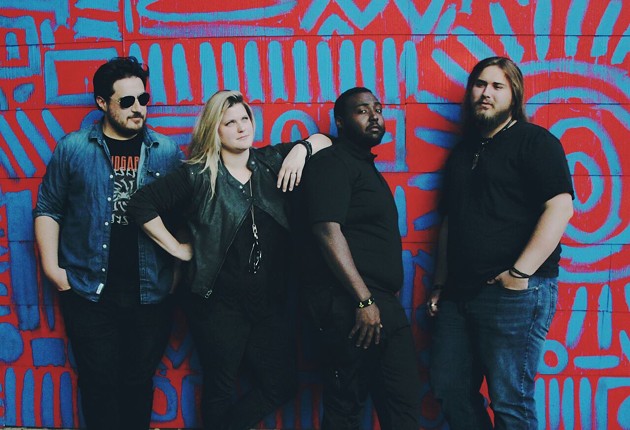 Ember City brings a new album to The Jinx.

Now that she was plugged in and cranked up, Poole’s project needed a new name. As a lifelong resident of Savannah (she moved here when she was three), she turned to her home—a city engulfed in flames in its early years yet spared from Sherman’s fiery march, a small town with a high murder rate—for inspiration.

“Fire is pretty, but dangerous,” Poole muses. “[Ember City] is another name for Savannah.”

While gigging in clubs and bars through Savannah and its surrounding areas, Ember City earned a devout following. Honing in on a specific page in recent rock history, their covers of Nirvana, Metallica, Weezer, all belted out by Poole, became a local favorite, tapping into audience nostalgia and commanding attention.

“We’re basically the left and right side of the brain stuck together,” Poole laughs. “It’s been a really fun project.”

This weekend, Ember City unveils Invisible Ruler. Recorded at Hybrid Audio Solutions in Charleston, the album is a bold debut, taut with Taito’s infectious guitar lines and instantly memorable thanks to Poole’s range and cool-girl vocal charisma. Fans of Geffen-era Hole, Veruca Salt, and Foo Fighters are sure to latch onto the sound.

It’s a great showcase of Poole’s voice, which she has adapted to the band’s sound.

“My acoustic stuff is very singer-songwriter style,” she says. “With rock, you learn how to do more with less. The little bit you do sing and yell out, it’s got to get to the point...people want the vibe and beats. That’s been really cool in reestablishing the concept of how I want to sing the song. It’s forced me to write my lyrics a little bit differently, a little more abstract, than I did before.”

The first song Poole wrote for the record was opening track, “Monster.” With a driving lead riff from Taito and headbang-worthy progression, Poole wrestles between raw rallying cries and smoky vocal lines.

“‘Monster’ is about how people deflect their own issues on you so you become the personification of their own crap,” Poole explains. “I really wanted to write about how those insecurities and anxieties manifest in different ways. It’s really an anxiety concept album—each song has a different focus.”

The album art, created by Savannah tattoo artist Jimmy Butcher, captures the feel. Two birds sit on the character’s shoulders as “a play on the angel and demon idea, but they’re both pessimistic, like how it always is in your head with anxiety,” says Poole.

Like many musicians and artists, she uses music to work through her own anxiety, and hopes the record alleviates the stresses of listeners.

“I wrote ‘Monster,’ then I wrote ‘Invisible Ruler,’” Poole says. “I knew that’s what the title needed to be—everybody at some point has to deal with anxiety, with that little voice in your head that you have to listen to and nobody even knows.”

Ember City will have albums available at their Jinx release show, and every entrant gets a free branded koozie. The band is already writing for their next release, working with new drummer, Frison, and planning weekend tours.

In the meantime, Poole is excited to share the band’s original music and belt it all out onstage.