A FRIEND AND I were recently discussing the difference between charity and service, and this is what we came up with:

Both benefit the less fortunate in a civil society. But charity can be accomplished by simply writing a check from the comfort of one’s home, preferably with a Montblanc fountain pen while wearing a smoking jacket and sipping an18-year-old scotch.

Even if our donations come in amounts that wouldn’t cover an hour’s worth of electricity for any non-profit, it’s still a way to give without getting up. Nothing wrong with that.

But service? That requires getting your hands dirty.

Well, sometimes, you must wear plastic gloves. And also, a hairnet. 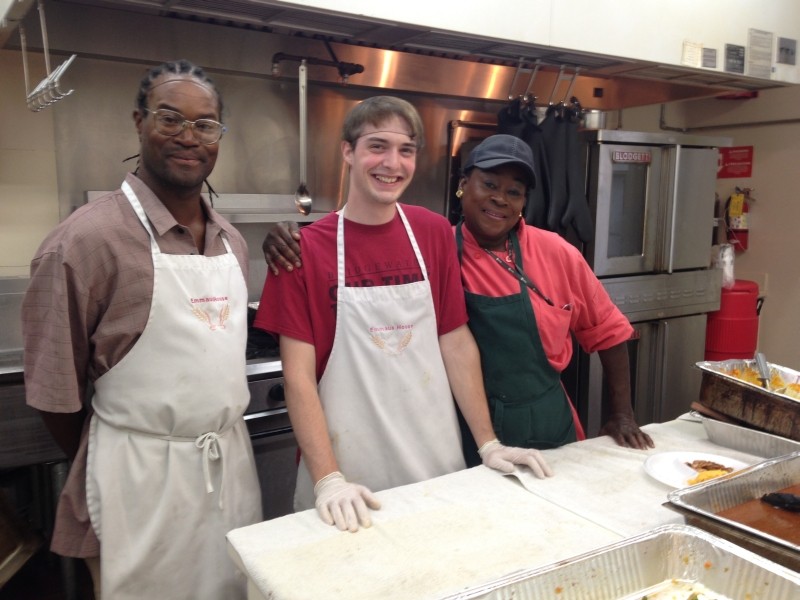 I found this out as soon as I walked through the side door at Emmaus House on Reynolds Square, the soup kitchen that has served a hot meal out of the first floor of Christ Church most weekdays since 1982. I thought I’d just come to do a little charitable reporting, but Chef Freda Payne cheerfully tossed me the necessary accoutrements along with an apron and immediately pointed me towards a griddle.

Within ten seconds I found myself flipping pancakes next to regular volunteer Ginger Heidel, who spends a couple of hours here every Wednesday morning before going to work at the website company she runs with her husband and Connect Brew/Drink/Run beer columnist, Lee.

“That’s OK, the first batch never turns out,” she reassured me as I slopped batter into lopsided shapes. Service can also mean getting the counter dirty and, if you’re very terrible with a spatula, your shoes.

The hotcakes were prep work for tomorrow’s meal, and Ginger explained that though the doors open around 8:30am, breakfast foods are actually an anomaly at Emmaus House.

Chef Freda prefers to serve something heartier to fill the bellies of folks who might not see another meal until the next morning: Barbecue chicken, creamy mac n’ cheese and mixed veggies filled the Styrofoam plates today, along with hot coffee and generous slices of cake at every setting.

“Breakfast is a time of day, not a type of food,” the chef will tell you briskly.

The breakfasters had no complaints as they filed in 50 at a time and received their plates. They ate quietly but with much gusto, then cleared the space for the next person.

It was, without exception, an atmosphere of fine table manners and tacit kindness. 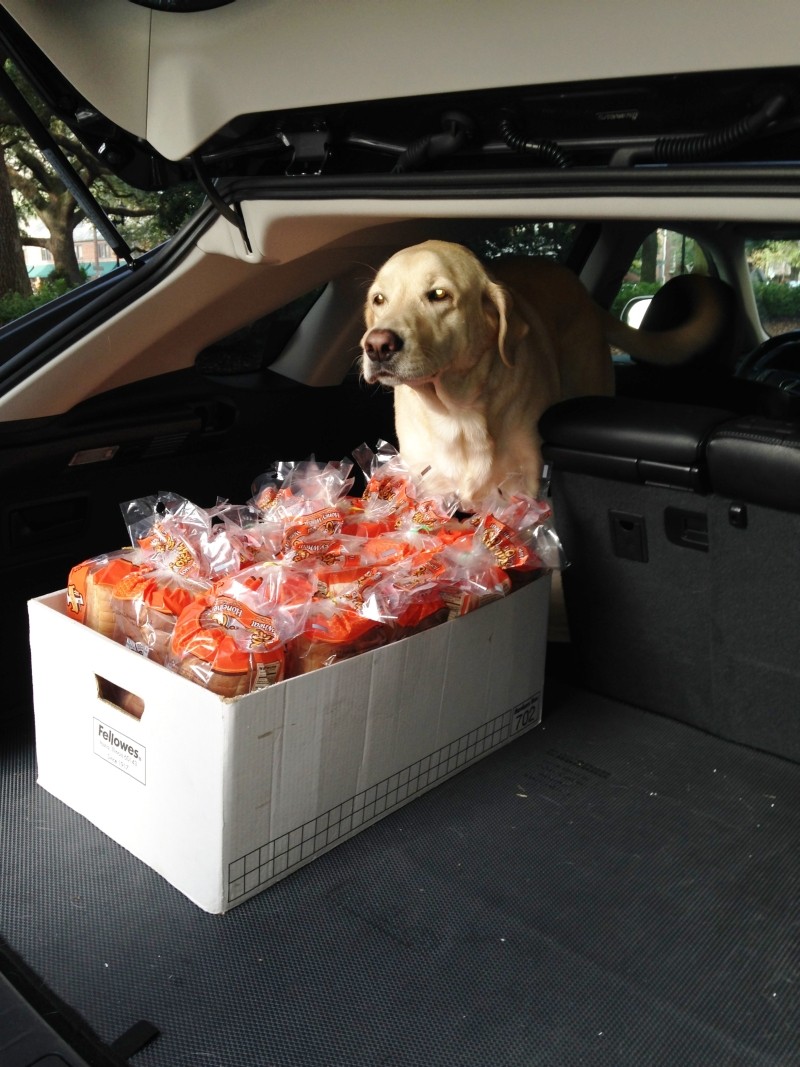 A genius of make-do scratch cooking, Chef Freda feeds between 130 and 200 hungry people a day with food donations from local restaurants, grocery stores and whatever’s available at the Second Harvest Food Bank. She also welcomes party leftovers and unused lunch portions. She rarely wastes a morsel.

Essentially, it works a lot like the folk fable of Stone Soup, where small bits of collective cooperation somehow end up feeding an entire village.

“It’s a juggle, especially at the end of the month when it’s more crowded, but it always works out,” she promised.

That kind of faith plays a definitive part in Emmaus House’s raison d’être: Collaborating under an umbrella called United Ministries, several of Savannah’s most prominent churches make it possible to provide meals to the homeless and hungry here as well as hot showers and washing machines. (The queue starts forming at 6am; the washing facilities close when breakfast is served.)

But other than a round of rejoicing in the day à la Psalm 118, verse 24, led by Deacon Jamie Maury, there was no detectable religious agenda.

“You don’t have to listen to a sermon or pray before you come in,” explained executive director David Acuff. “You don’t even have to be sober.”

Furthermore, Emmaus House collects no data, takes no names and makes no judgments.

“We don’t have the space or the people power even if we wanted to,” shrugs David, sweeping his arm around his tiny office.

“All we’re trying to do here is feed people. That’s it.”

Also a cheerful fixture at the Savannah Bicycle Campaign, Metro Rotary, Ogeechee Riverkeeper and a dozen other worthy local causes, David spends a good portion of his week schlepping around town picking up orphaned sandwich trays.

“People ask us what we need,” he says, estimating Freda and her crew served close to 35,000 meals last year. “I always say, ‘Whatcha got?’”

If you’re wondering about the legalities, contributions are covered under the Bill Emerson Good Samaritan Food Donation Act, which absolves you should Aunt Agnes’ leftover potato salad result in any issues later. The law also requires the gloves and hairnets. And the Health Dept. visits regularly, just like any other restaurant.

While this soup kitchen rarely serves actual soup, there will be bottomless pots of steaming broths and stews from your favorite local restaurants this Sunday, Nov. 9, at Emmaus House’s yearly fundraising event, The Empty Bowl. Twenty bucks gets you all the soup you can eat plus a handmade bowl to take home, donated by the Clay Spot, Starlight Pottery and the art students at Savannah Country Day.

Yes, it’s a charity event, and it’s going to be delicious.

I had just hung up my apron when I had the thought that charity can be part of what makes service possible. I was about to write that down for a later conversation when a call rang through the kitchen: “Bread Dog is here!”

David tugged my sleeve and pulled me outside. “Oh, you have to meet Bread Dog.”

A slobbery delight of a Golden Retriever, Bread Dog not only accompanies the weekly donation from Derst Bakery but also peformed the service of licking me clean of any extra pancake batter.

Between its volunteers and its clients, Emmaus House satisfies more than physical appetites. At sunrise, over 160 people had been leaning against the stone wall, some of them homeless, all of them hungry.

Now the line was fed and gone, and the suits and tourists walked through the square, unaware of the exchange of humble kindnesses that happen here every day.

Charity only goes one way. But service, I believe, boomerangs something even better back.