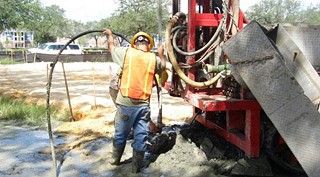 The secret to 24/7 free energy lies right under our feet. The earth absorbs the heat of the sun and retains it. As far as several hundred feet below the surface the temperature of the earth stays a constant 69 to 70 degrees.

Geothermal systems capture this heat to warm buildings during the winter, and draw the heat out of the building and pump it back underground to provide cooler air in the summer.

No pollution, no greenhouse gasses, just a geothermal heat pump the size of a small refrigerator, with a useful life warranty of 20 years, quietly maintaining comfortable temperatures.

The recent, and under-reported, symbolic groundbreaking of what will be the Savannah Gardens neighborhood redevelopment of Strathmore Estates, unearthed the city's game plan to provide geothermal energy to 150 single family homes.

According to Martin Fretty, city director of housing, "We're trying to find ways to put in both Smart Meters and geothermal."

If the city succeeds in this Eastside development, it will be the largest residential use of geothermal in the region.

While geothermal installations have been sparse locally, the thrust for renewable energy, the demands for energy efficiency from architects, urban planners and developers, and even the passage of Amendment 4 to the Georgia Constitution, could result in rapid growth.

Across town, Charles Davis, president of Earth Comfort Company, Inc., points to a circle of what looks like giant mud pies on the eventual parking lot of Phase II of Sustainable Fellwood, the mixed-housing development on West Bay Street.

They are soil samples taken at various depths. Davis explains that the composition of the earth will help him determine how many boreholes will have to be dug to provide enough energy for the heating and air conditioning requirements of a new community center. Layers could be of sand, clay, gravel, slate, or rock.

This test bore struck rock at 240 feet. A loop of tubing is fed into the hole and water circulated for 48 hours. Davis then collects the data and runs it through a computer to determine the conductivity of the earth - the rate at which the earth will give up its heat and absorb it. He then compares it to the projected energy demand of the community center and determines that 10 boreholes will have to be drilled at least 240 feet.

The impetus for geothermal at Savannah Gardens was given a boost by builder of affordable housing Gary Udinsky, GBU Construction LLC, and his son Andy. By chance they owned two building sites directly across the street from the northern border of Savannah Gardens.

"We knew that the city had been talking about geothermal for awhile", he says, "so we approached the city and decided to incorporate it."

They built two energy efficient houses. Their basic designs are different but both incorporate energy saving materials, Energy Star appliances and are built to EarthCraft standards.

(EarthCraft is a green building certification program to help ensure that buildings and communities in the region meet strict criteria to save energy and water, ensure high indoor air quality, and protect land and natural resources.)

According to Fretty, when the Udinskys proposed the addition of geothermal, he saw this as an opportunity to evaluate the process locally. It qualified for a Dream Maker 3 program, where the City provides incentives to builders of affordable housing.

"We drilled bore holes 300 feet deep and spent three days on each building." Byrd has been promoting geothermal and Chance says he sees a lot of interest though that hasn't been translated to many orders.

"There's about an 11 to 14 percent return on investment, a federal tax credit of 30 percent, a $2500 state tax credit," he notes. "The system provides domestic heat and cooling, and free hot water during the summer."

Although a residential geothermal system costs from $6-$8,000 more than conventional heating and air conditioning, with the tax breaks there is a 3-4 year payback. It absolutely pays for itself."

"Geothermal could become a standard heating system." A second benefit: "once installed the house is easier to sell."

Geothermal is still so new that Fretty is concerned that "appraisers and banks don't always consider the added value. Perhaps one lender in every community and one or two appraisers take into consideration the use of high quality materials and energy efficiency."

Charles Davis concurs. "We spend a lot of time educating the public and we need to do more."

He suggests an energy charette (intense design workshop) periodically as a way to gain better understanding.

But Davis, who became a member of the International Ground Source Heat Pump Association in 1988 and is a persuasive advocate of geothermal, thinks we have to go beyond a single source of energy generation. He wants to move toward Zero Energy construction.

As examples, he points to two projects his firm completed this year. They demonstrate that a geothermal installation works for renovations as well as new construction.

The University of Georgia Marine Extension Laboratory has been undergoing an energy transformation. The 20-year-old 16,000 sq.ft. building is being used as an educational model for energy efficiency and conservation. All the gas heat was removed, and 70 boreholes, 250 ft. deep were drilled.

Energy usage, with geothermal alone, dropped from 2600 kWh in June 2009 to 1400 kWh this year. Heated water will replace or supplement the building's hot water heaters. Two pole-mounted grid-tied solar arrays that tract the sun, totaling 3kW, are installed, as well as a state-of-the-art bladeless Honeywell wind turbine, capable of generating 2,364 watts. All told the projected annual utility savings is $16,000 a year.

In addition, the building sports a green roof and incorporates rainwater harvesting. The facility will also install pervious pavement, a cistern, rain garden and use of native drought and salt resistant native plants.

As an example of what can be done to upgrade an aging housing development, Davis points to 20-year-old Woodvale Apartments, a low-income senior citizen complex in Cordele, GA. Here the geothermal installation had to be threaded around existing trees and landscaping.

Davis drilled 144 boreholes, 250 ft. deep for the geothermal loop, and each of the 86 units and two community centers has a small water-to-air heat pump.

Atlanta-based developer Bill Rae, owner of the complex, had applied for and was awarded a state grant of stimulus funds. In addition to tax credits he used the funds for both energy efficiency and energy generation. All of the units were totally renovated.

Kitchen and bath appliances and fixtures were all replaced, as were windows and doors, Each unit contains a new range/oven, refrigerator, garbage disposal, dishwasher, microwave, washer/dryer hookup, carpet, tile, blinds.

"For low income families the cost of utilities represents a sizeable expense," he says. The combination of geothermal heating, air conditioning and hot water combined with energy efficiencies, should make a sharp dent in that part of the budget.

In addition, he installed a 33kW rooftop solar array on one of the community centers to help defray electricity usage.

The recent passage of Amendment 4 that allows state entities to sign long term contracts with energy service companies should result in a continuing increase in demand for both geothermal and solar installations, according to Davis.

"These companies front the costs of equipment and installation and are repaid over seven to ten years from projected energy savings." He has already been contacted by some of the largest companies in the field.

The promise of alternate energy may finally be realized.

BUNNY IN THE CITY: 'Trucking for a Cause' Car Show at Red Door Auctions 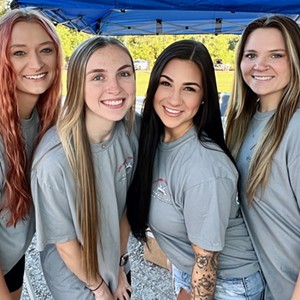