IF YOU live in Savannah and you’re active on Facebook, you’re probably familiar with Enki Research.

The page hits a spike in popularity each time a hurricane threatens to pummel our coast. As the social media din grows to a roar, people insistently share Enki Research’s updates as an alternative to the hype seen in other predictions.

The man behind Enki Research is Chuck Watson, a geophysicist who’s reluctant to claim the spotlight. Connect sat down with him ahead of Hurricane Florence to learn more about his line of work. 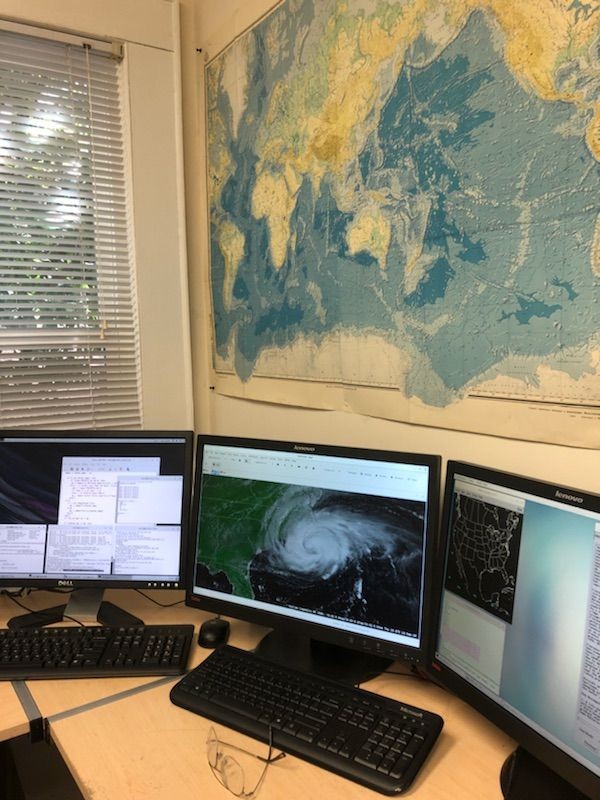 Tell me about the work you do.

I’m a geophysicist. I spent a number of years on government service projects— I had a TS/SCI (Top Secret/Sensitive Compartmented Information) clearance. I handled nuclear weapons!

I ended up doing a lot about natural hazards. Our government cares a lot about natural hazards. They do want to help and give aid, but let’s say you’ve got a bad earthquake in Haiti. Naturally, you want to help the people, but you also want to know, is that going to destabilize the government of Haiti or create a flood of refugees? There are lots of national security implications for those kinds of hazards. That’s critical information to be able to anticipate.

What projects are you currently working on?

It’s different everywhere you go; it depends on what each area’s risks are—are they more at risk of flooding or of sinkholes?

What did that work teach you about emergency management?

That’s one of the things I got a little bit of flak about last year. I really don’t like commenting on emergency management. They have a tough job. I’m not trying to gloat, but I’ve been doing this for 25 years. I don’t have the responsibility for this area, but I have trained emergency managers, so I probably know in more detail than they do the forces and pressures they’re facing. I know how tough that process is, and I also think most of the time they’re doing a good job, but look at what happened last year.

That’s why we got into this whole big hassle of the governor, who sits in Atlanta and issues evacuation orders based on guidance from folks in Atlanta who look at a map and see I-95 and that’s the landmark they’re using.

Well, if you’re Dennis [Jones] with CEMA and you know the terrain and that we should only be going from the Truman Parkway—first off, legally, you’re stuck because once the governor issues that order, you’re stuck with his order, whether you like it or not.

In the old days, there was a civil defense mentality. It went absolutely crazy after 9/11. Security managers got rolled in under this rubric of Homeland Security.

Most emergency managers today are out of law enforcement, so they have a law enforcement perspective on people. It’s a miserable job most of the time, and they tend to get jaded.

That’s why you should not have emergency managers come from law enforcement. They’re thinking in terms of population control.

After Irma, I posted a picture of people cleaning up 49th Street and the caption was, “All these people are criminals.” They were. They violated the governor’s orders to evacuate, they were violating the local order, and they were technically guilty of crimes.

But they got this neighborhood up and running in a fraction of the time it would have taken the city government to do it.

What’s a misconception people have about your work that bothers you?

One of the things that annoys me is when people talk about Chuck’s forecast or Enki’s forecast. I don’t do forecasts.

As part of my work for the international community, I do forecasts, but you will never hear them. I can show you all kinds of incredibly detailed model runs and statistics and scenarios, but when it comes to what’s going on in this community or anywhere, I deal with the National Hurricane Center forecast.

What’s funny about that is there’s one particular TV station that keeps showing individual model tracks and talking about the European model, partly because those models produce beautiful graphics.

Am I going to show you this static map or this beautiful fancy animation? If I’m on TV, I’m showing you the cool animation, but what’s best for the viewer is to stand in front of this [static] map for 30 seconds and explain what it means.

The analogy I like to use is your general practice doctor vs. a neurosurgeon. People are always asking me, “Oh, my wedding’s next Saturday, can you tell me what the weather’s going to be?” I’m like, “Well, you’re not going to die.”

My specialty is that ten percent of scenarios that’s going to knock down buildings and break things. If it’s a nice day, unless I can go fly my plane, I don’t do routine forecasts. Go watch your local TV station.

A lot of people talk about the European model. The European model is a very good, non-hydrostatic formulation. I see a lot of journalists who haven’t done their homework say it’s the best model—it isn’t.

If you look at the stats from last year, at five days it had an average error of 170 miles. The official National Hurricane Center forecast at five days had a 140 mile error. That’s, what, a third better?

Why do you think your Facebook posts appeal to people?

I think there’s an appetite by most people to have a nice, concise prediction. I think people are really hitting burnout. You can only stay with your adrenaline pumped up for so long.

You look at this storm, and it’s been a week of drumbeat attention on this thing and it wasn’t necessary. Those hazard areas did not shift. For all the wailing about track model changes, it hasn’t changed that much—but you would never know that.

We’ve learned a lot about how storms work. One of the areas I work on that is frustrating is, how do you get science into government decision making? How do you get it into the public awareness and how the media conveys risk and hazard information?

We have some of the best science in the world, but there’s a streak of anti-intellectualism in this country. It’s amazing and shocking to me.