Enveloped in the Beloved Community

EVERYBODY KNOWS that in this world, you gotta have a thick skin to survive.

Some seem to be born with the ability to shake off adversity and insult, untroubled by the distractions of injustice and imminent environmental catastrophe. The rest of us fashion reptilian armor to protect ourselves from the slings and arrows of this outrageously unfair and hectic life. Hearts on sleeves are rarely rewarded and not recommended.

I don’t know about yours, but my alligator hide must’ve been manufactured at the same Taiwanese factory that makes crappy dollar store umbrellas.

The weather’s finally turned fall gorgeous, but last week still brought in quite a storm: ISIS and Ebola and Augusta Avenue and the Koch Brothers marauding our country’s resources and political system like a couple of sociopathic pirates in pinstripe suits.

Pile that on with raising a teenager, a barrage of emails from unhappy readers and a weeping blister accrued by a shitty pair of shoes, and I’m feeling as shredded as a piece of laundry left on the line.

(On that note, I extend an apology to the history department of Armstrong University for erroneously reporting that no local representatives were present at the Slave Dwelling Project Conference mentioned in my Sept. 24 column. Associate professor Dr. Michael Benjamin attended and participated in several discussions after the event profiled in the story.)

Fortunately, there was a salve last Tuesday at Muse Arts Warehouse, where activist authors Tom Kohler and Susan Earl had arranged to film the telling of their book, Waddie Welcome and the Beloved Community. 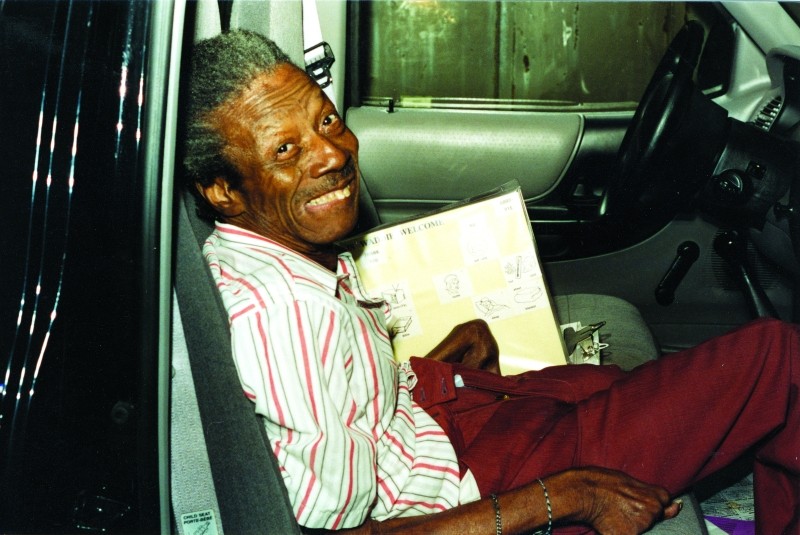 Mr. Waddie Welcome would have turned 100 years old this summer.

The book follows the life of Savannah citizen Waddie Welcome, born with cerebral palsy and relegated to a faraway nursing home after his parents passed away in the 1970s. Mr. Welcome managed to charm practically everyone who crossed his electric gaze, drawing Kohler, Earl, “angel-on-earth” Addie Reeves and dozens of others into a circle of advocacy that eventually helped bring him home. It’s both a biography and a fable, with a moral lesson far more joyful than any of Aesop’s.

“Keeping the ‘social’ in social change” is the rallying cheer that continues to buoy the story and its message: We all matter, and we can all help.

Waddie Welcome and the Beloved Community has also inspired a play, a spectacular quilt by Beth Mount, an interactive walking tour and other forms of art. Tuesday’s reading—filmed and edited by Jay Self and Andy Young and assisted by Jay’s daughter, Emily—will be released by Inclusion Press and used as an educational resource for organizations like Citizens Advocacy that work to increase the dignity of those living with disabilities.

I have a copy on my nightstand, and I wouldn’t miss the opportunity to see it presented in person. And as it turns out, there couldn’t have been a better place to show up with one’s protective shell in tatters.

As the slowly-dying Absurdivan puttered up to Muse with all the oompf of a hippopotamus in the last stages of emphysema, I glimpsed a Who’s Who of some of Savannah’s biggest champions of social change:

Standing at the stoop of the concrete staircase was Molly Lieberman, who spends her days funneling love and art into the children and grown-ups at the West Broad Y. Standing next to her was Clinton Edminster, the ever-smiling, octopus-armed booster behind ArtRise Savannah. And then came kisses from my favorite preschool teacher in the world, Ms. Maggie Smith, who has preserved playful childhoods for over 30 years at Maggie’s Morning School. Within minutes, my drooping spirits were bolstered from their friendly squeezes.

I traveled down this gauntlet of love into the arms of Barbara Daughtry, who I shared some laughs with at the annual Citizens Advocacy potluck last May. She may only be barely four feet tall, but Barbara has an embrace that can knock even the heaviest chip off one’s shoulder.

I got a hug out of former Citizens Advocacy chairman Robert Cohen, but only after he gave me the hard sell for his book of poetry, Joys Fears and Tears, a lovely read based on his experiences living in a wheelchair and getting his degree from Savannah State.

I collected more handclasps and hugs from fellow writers Amy Paige Condon and Kris Monroe, and pressed cheeks with author and SCAD professor Susan Falls. I flung some good vibrations at Muse’s JinHi Soucy Rand and her husband, Mark, always so busy behind the scenes and tirelessly holding this space for art and authenticity.

I didn’t want to scare assistant city attorney Lester Johnson, so I let him off with a firm handshake. But Tammy Kenckel, a service coordinator for Williams Court Apartments, and her husband, Tom, who’s on the board of community radio station Savannah Soundings (see story on page 14), weren’t so lucky.

By the time punk rock goddess Angel Bond and Mike English (the bluesiest bank president that ever lived) began to croon and strum Sam Cooke’s “A Change Is Gonna Come,” I was a bit punch-drunk on the love, in a totally non-Beyoncé kind of way.

For this was the kind of event for which The (Civil) Society Column was conceived: A gathering of some of Savannah’s most courageous souls, people unafraid to be helpful and hopeful, ready to act but not willing to move ahead until everyone else has caught up.

Martin Luther King, Jr. called it the Beloved Community. I’ve come to think of it as a far better safeguard for our survival than spiky stegosaurus skin. A lot cozier, too.

“What we believe has so much to do with what happens in the world,” counseled Tom from the podium, reminding how powerful we are when we are brave enough to be vulnerable to each other.

He enjoined us to share what lessons we learned from Waddie Welcome’s story on big posters in the Muse lobby.

I thought a minute, then wrote, “The antidote for despair is service.”

After many warm good-byes and “see y’all soon”s, I went home to repair my armadillo fleece for another day. Amid snuggles from and gratitude for my beautiful family, I thought of something else:

That hugs are the best kind of medicine, especially when given with arms wearing hearts all over their sleeves.