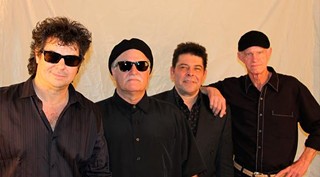 Hey, want to hear a smoking hot finger-picking guitarist? Sommer, late of the Boston power pop band the Atomics, plays like Leo Kottke, and he sings like Randy Newman crossed with Lyle Lovett (blues, ballads, old country, pop tunes, weird stuff and what he calls "swamp rock"). He is a one-of-a-kind guitar player who carries an arsenal of open tunings, bottleneck slides, cool effects, feedback, harmonicas and powerful percussive hand-slaps and other rhythmic devices. He travels - alone - with seven or eight guitars, and a trailer full of amps and other acoustic ephemera (he plays a Telecaster as well).

For this dedicated road warrior (he tours so much he does not have a permanent residence) the writing process is key. Red Chairs, his book of prose and poetry, is in its fourth printing; a second volume comes out in September. And he writes, pretty much all the time, on his website - musings on life, music and the road. "About 15 years ago," Sommer told an interviewer in June, "the floodgates opened, and I am writing at least one something every day - a lyric, a title, a song, a bit of prose.

"Now I am inspired by and about everything from a pencil on the desk to a dead bird on the path. Everything seems to be a metaphor for everything else. There are so many ideas screaming to be heard that I take the loudest one every day to address, but there is always another one right behind it." See ericsommer.com

With the addition of swingin’ piano man Tommy Beaumont, this South Carolina blues/rock outfit (yes, it used to be a trio) has been tearing things up at one club after another between here and Charleston. The band’s ace in the hole is guitarist Bill Luebke, who cut his teeth on Cream–era Clapton, Jeff Beck and Johnny Winter. Luebke has been playing for 45 years and has a frightening mastery of the heavy–bending Stevie Ray Vaughan sound. He’s also a master luthier (he makes guitars). Bassist Tony Reyes has a throat–shredding Texas blues vocal style (nods to Winter and Vaughan); veteran drummer Greg Gresham was schooled in big band and jazz fusion, which gives his groove–laying, heart–skipping beats a heavily syncopated and funky edge. See myspace.com/scthegroovetones

Saturday's Wormhole show is a benefit for the surviving animals of Ludowici's abandoned Looney Farms Shelter. Performing will be the classic rock band Bad Justice (pictured), which features several longtime members of the Savannah rock 'n' roll community. There's a free cookout - the grill cranks at 8 p.m. - and no admission, although a $10 donation is suggested ... Check out American Aquarium frontman BJ Barham Monday at the Jinx, in one of his infrequent solo acoustic appearances ....