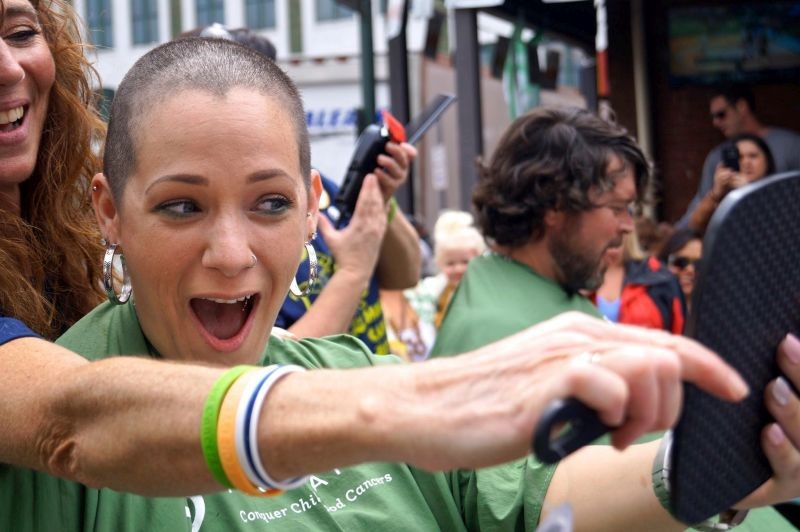 Photos courtesy of St. Baldrick’s Savannah
St. Baldrick’s raises funds for childhood cancer research by taking it down to the scalp.

"OH MY GOD, you look like a thumb," cried my mother. "What did you do to your hair?"

My dad’s reaction wasn’t as dramatic, but no less incredulous.

“Did you lose a bet?” he asked, circling my shorn head.

I explained in my best academia-speak that now that I had finally graduated from college, I was claiming my destiny independent of societal definitions of beauty and identity and that shaving my head with my roommate’s dog shears was a symbolic action of personal liberation.

“Well, at least no one can deny the family resemblance,” snorted Dad, rubbing his own bald pate.

Let’s just say it wasn’t a great look, what with the massive ancestral frontal lobe going for me. The growing-out process was also hideous, due to an abundance of cowlicks and the fact that Bumble & Bumble hair paste had not yet been invented.

With the freedom of adulthood also came the tangled tresses of real life, and I have not been tempted to shave my head again since.

That is, until I talked to Dr. Yael Elfassy-Conner. As the lead coordinator for the Savannah chapter of St. Baldrick’s, the non-profit that raises money for childhood cancer research via head-shaving events around the world, the local pediatrician offers a seriously solid reason to lose one’s locks.

“Only four percent of the total funding for cancer research in the U.S. goes towards childhood cancers,” explains Dr. Yael, who serves patients at the Curtis V. Cooper Primary Care clinic and has seen her share of little ones with leukemia, lymphoma and brain tumors.

“But the way we treat cancer in kids is totally different than in adults—there are different protocols, different meds, and the more research that’s done, the more lives that are saved.”

St. Baldrick’s became a St. Patrick’s season tradition in 2000, when three successful stockbroker buddies in New York City made a bet to see who could raise the most money, putting their Jameson bender and clippers to work for the greater good. They ended up raising $104,000 for the Children’s Oncology Group, which has over 200 locations, including Memorial University Medical Center. Since watching people get their heads shaved is marvelously entertaining, dozens more benificent buzzfests sprouted up in the first year.

In March 2016, more than 1200 St. Baldrick’s events pruned over 46,000 noggins and netted $38 million—70 percent of which went to increase clinical trials and bring the combined 5-year survival rate of childhood cancer to 80 percent. Not since Delilah fleeced Samson has a pile of hair been so powerful!

Dr. Yael oversees the annual mass shearing event in City Market, taking place this year on March 25. She also does bald beautifully herself.

“I’ve shaved my head every spring for the last seven years for this cause,” says the good doctor, the mass of curls currently springing adorably near her ears to be offered up for sacrifice once again.

“Plus, I don’t have to do anything else with my hair for the rest of the year.”

It’s an alluring idea not to have to purchase shampoo for a few months, but it takes a brave heart to go bald on the regular. More than a local hundred men, women and children dared to give up their hair last St. Pat’s season, and a good number were repeat shavees.

Muralist Morgan Webb can’t remember if it’s five or six times that she’s bowed her head to the blades, but she plans to do it again next week.

“You get up there, and people are smiling, it’s so joyful. It’s a little shock when you look in the mirror, but I never have any regrets,” says the Effingham County art teacher, who has amassed a collection of big earrings to complement her look.

“It can also be incredibly emotional.”

Like many of the saintly shorn, Morgan participates in St. Baldrick’s in honor of and in solidarity with children whose names she knows well. One of her students, Ella Boswell, was the honored child for the event last year and passed away shortly afterwards from a rare form of brain cancer. Since then, four more of her students have been diagnosed with other types of cancer.

“It’s impossible to not to want to do it once you start meeting these kids,” sighs Morgan, whose murals adorn the pediatric oncology unit at Memorial. “My days of long hair are probably gone.”

While the gravity of its purpose is never far from people’s minds, she promises that the tone of St. Baldrick’s is overwhelmingly celebratory—of the tens of thousands dollars raised that stay local, of the strides towards a cure, of life itself. Crowds gather to watch the hirsute spectacle, and WTOC’s Mike Cihla keeps up the banter, enticing passersby to make a donation and maybe even offer up their own manes. (Dr. Yael says at least a dozen take him up on it.)


But you don’t have to personally embrace baldness to take part. Hairdresser Nancy Moore has brought her skills to St. Baldrick’s ever since her son, Dylan, was diagnosed with Philadelphia chromosome-positive acute lymphoblastic leukemia in 2010.

“Dylan didn’t have hair for 18 months,” recalls the mother of three who coordinates the event’s volunteer barbers. “Helping people participate in this feels symbolic and powerful.”

Thanks to advances in pediatric oncology treatments made possible by organizations like St. Baldrick’s, 15 year-old Dylan is strong and healthy, pushing around a broom to sweep up the fallen strands. The biggest worry he gives his mama these days is learning to drive, but Nancy holds her arms wide open for parents going through the fear and heartbreak of a sick child.

“I know how they feel,” she says, her voice quiet. “We’ve seen a lot of kids come and go.”

There’s plenty of time to join one of the fundraising teams, and if the mirror is telling you you need a haircut, consider donating the fee and maybe even more: Qualifying ponytails will be sent off to Wigs for Kids.

I’ll definitely stop by City Market next Saturday, though I’m not sure I’m ready to see my lopsided skull ever again.

But whether I toss in a few bucks in the bucket or go full Baldrick, either way it’s a bet I can’t lose.