Savannah Soundings all set for its first broadcast this month 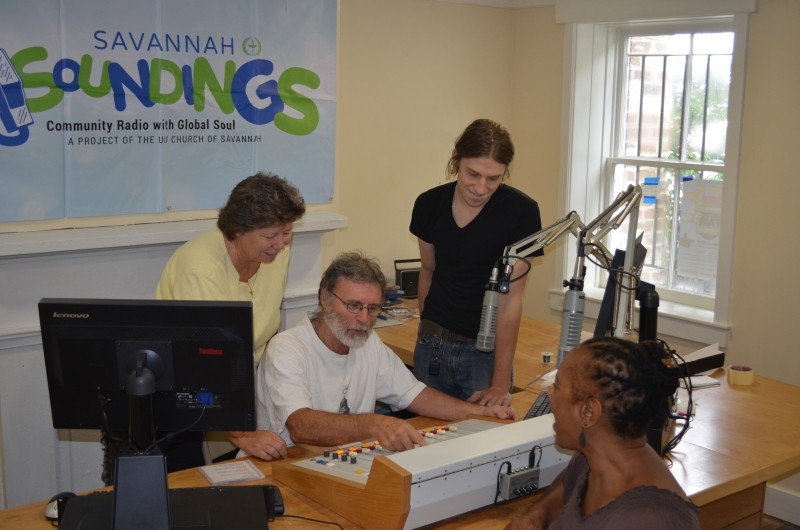 IT'S BEEN almost a year since Savannah Soundings received its FCC license, and community radio station WRUU is ready to launch.

Forms have been completed. Funds have been raised. The mixing board and the microphones are in place.

All that’s left is the small matter of installing the antenna on the shared tower on the western edge of town, a task that will take another $15,000 to complete.

Once the riggers match the wires, WRUU will begin broadcasting its mix of talk and music at 107.5 on the FM dial.

Savannah Soundings’ eager sponsors have already kicked in another few thou, and the group hopes to garner the last bit of capital at an open house telethon this Sunday, Sept. 20.

“It could go as quickly as a month, but definitely by the end of the year,” assures project manager Vicki Weeks of the antenna raising.

In the meantime, however, don’t expect radio silence.

WSUU’s program hosts and disc jockeys have their guests and playlists ready now, and listeners can tune into a live stream starting Sept. 21 at savannahsoundings.org.

“The internet will be a trial period to make sure we’re in keeping with the FCC standards,” says Weeks.

“These are all volunteers, people who have always dreamed in being in radio, and we’re all still learning the rules.”

The committed cadre includes Kevin Ionno, who has spent the last months researching policy as part of the governance team.

“Everyone wants a show, but when it came time to join one of the teams, I saw this list was empty and I figured this is where they needed help,” laughs Ionno.

To formulate the parameters of the executive task force and other procedures, he and his teammates consulted policies from existing stations and NPR.

He also got his show: “Praxis” will debut in WRUU’s first weeks and is billed as “conversations with notable people in the community about how their values, beliefs, ideals, and philosophies have shaped their lives.” His first guest will be SCCPSS School Board President Jolene Byrne.

Savannah Soundings and WRUU are housed in the Unitarian Universalist Church on Troup Square, and part of the station’s mission is to “provide a voice and visibility” for groups and issues that “celebrate the diversity of our community.”

Local groups such as Emergent Savannah will have a space to address change in the current social climate, and other talk programs highlight women’s history, poverty, and health.

“We like to think of this as having the dimension of a public square,” muses Rev. Dave Messner, UU’s minister.

“How do we connect with people across difference? It’s a consistent challenge in Savannah—culturally, racially, generationally, across gender. This is another way for people to connect and be heard.”

Adds UU president Denise German: “The church doctrine the promotion of a world with peace, liberty and justice for all. While it is a project of the church, it’s open to the entire community.”

It’s also open to spinning all kinds of music. About half of WRUU’s 56 weekly broadcast hours are dedicated to tunes, most of which won’t be heard anywhere else on the dial. Hits from Africa, Keith Kozel’s Calliope of Sound, blocks of Bob Dylan and the eclectic “None of the hits, All of the Time” hardly cover the creative ground; at any point, listeners may hear blues, punk and no shortage of local jams.

“I’ve got people coming on who play blues and folk and rock ‘n’ roll to talk about what their music means to them,” says Miller, who performs as part of the guitar duo Mitch & Nico. “I’m really excited to give community members a voice.”

WRUU operates from the former “junk room pottery studio” underneath the church, now a sunny station room with fresh paint and its very own “On Air” light outside the door. Signals will be streamed and archived online and simultaneously broadcast via an antenna on the roof, which will eventually link to the tower at the I-16/516 interchange.

While LPFM (low power FM) community radio stations often have a limited range, WRUU is expected to reach a swath of listeners from Bloomingdale to Wilmington Island and from the Savannah River to just north of the Savannah Mall, covering most of Savannah’s central population.

That blanket of sound may soon stretch even further as the FCC considers a proposal to increase LPFM capabilities from 100 watts to 250 watts.

The FCC has taken comments on the proposal that would change the rules for WRUU and the other LPFM stations around the country, most of which are run by churches, labor groups, schools and other non-profit organizations.

In addition to increased power, the submission also loosens the restrictions on selling advertising, essentially turning the people’s radio into a business enterprise.

It’s generated no small amount of controversy in the community radio world, where groups like the National Association of Broadcasters argue that the new rules will erode the integrity of LPFM stations and their essential services.

The Low Power FM Advocacy Group, who submitted the proposal, contends that more than 600 stations have failed because of the labyrinth of existing rules and the inability to adapt their economic models.

Whether the FCC approves the proposal or not, WRUU has already built the 250-watt capability into its budget and will tackle any changes as they come.

“There’s a real difference between commercial radio and being underwritten by sponsors,” says Weeks. “Right now we’re focused on meeting the community standards.”

The community is invited to find out more at Sunday’s open house—memberships start at $25 for students and seniors, and maybe you have an idea for a show of your own.

“We have 56 hours to fill every week,” encourages Weeks.

“There’s still plenty of room to get involved.”