3D light installation takes public art beyond murals and monuments. The vivid spectacle is free and visible to passersby and anyone touring the city for nighttime splendor every evening from 7-9 p.m. through December 28. 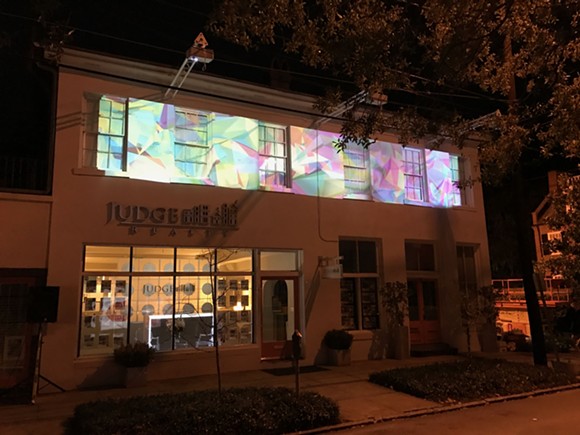 ILLUMINATED front yards and flashing storefronts are ubiquitous this season, but one light show is outshining even the most extreme holiday display.

“Intersection” wasn’t conceived as yuletide-themed, but it’s a gift nonetheless. The third installation of Judge Realty Public Art Projects debuted last Thursday in a flood of moving patterns and colors, imbued with the intention of sparking conversation and community.

The vivid spectacle is free and visible to passersby and anyone touring the city for nighttime splendor every evening from 7-9 p.m. through December 28.

Artist Will Penny created the dynamic kaleidoscope by feeding original abstract designs and 3D animation through three projectors mounted to the front of the building, casting the façade of 347 Abercorn Street in an electric glow. The after dark display includes one of Penny’s sculpted wall panels mounted inside the large window, and the looped sequences will update to offer a new amalgam every few days, reflecting what the artist calls “an evolution of the aesthetic.”

“It’s a merger of the notion of public art and my own interest in trying to manipulate or translate space into a different kind of experience. The three-dimensional forms moving on the architecture interact with the other organic elements on the street,” says Penny.

“Basically, we’re using the building as one long canvas.”

The psychedelic demo does more than just spotlight the architectonics. Thursday’s block party benefitted #art912, the Telfair Museums initiative to raise the profile of Savannah’s arts community—an effort more necessary than ever in the face of devastating city budget cuts. 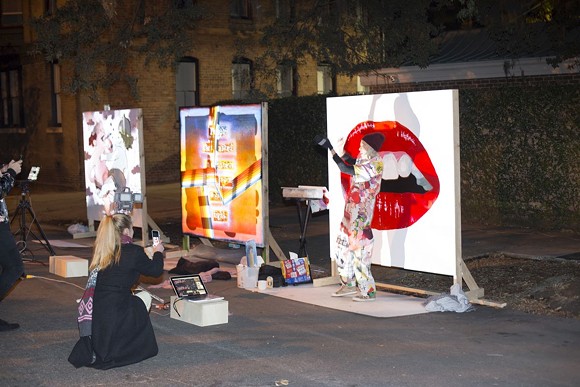 The premiere of Will Penny’s “Intersection” included street art powered by looped feeds.

Cheers and toasts abounded as “Intersection” lit up the night, Penny’s work enriched for the evening with live art action from other local luminaries Elizabeth Winnel, Britt Spencer and Matt King.

For Penny, the piece represents the junction of the simulated and the real, the abstract and the material, the larger universe and Savannah itself.

“It’s site-specific in many regards,” he muses of the animated architecture. “It wouldn’t exist anywhere else, that’s for sure.”

Penny isn’t the first to utilize the exterior of Lori Judge’s real estate business as a canvas for public art. In 2012, the outside of the building hosted a flowery transom constructed out of recycled plastic bags by artist Katherine Sandoz. That was followed by last year’s “Mossterpiece” by Jamie Bourgeois, who affixed live moss in the shape of fern leaves to the façade.

Like both of those projects, “Intersection” is a temporary installation per the City of Savannah’s mural ordinance, overseen by the Historic Sites and Monument Commission. But Penny’s employment of light, animation and projection is a departure from the traditional format of public art—as least in Savannah.

“We really wanted to push the envelope this time,” explains Judge of hosting another installation.

“We wanted to challenge the notion that public art is just murals and monuments. Not that there’s anything wrong with murals—they’re great!—but there’s more value in the structural value of the architecture in what could be.”

An avid proponent and patron of the local arts community, Judge recently established a permanent collection of paintings and sculpture based on the crossroads of energy, economy and the environment.

Her travels have exposed to her myriad manifestations of outdoor possibilities, from Miami’s Wynwood Walls to Kurt Perschke’s Red Ball Project that has appeared in 25 cities around the world, and she advocates strongly that public art benefits communities and commercial prosperity. She has long held a vision of turning her 1870s-era office into a revolving platform for all types of media, a wish granted recently with the help of Erin Wessling of W Projects, Judge’s longtime partner in artful mischief. 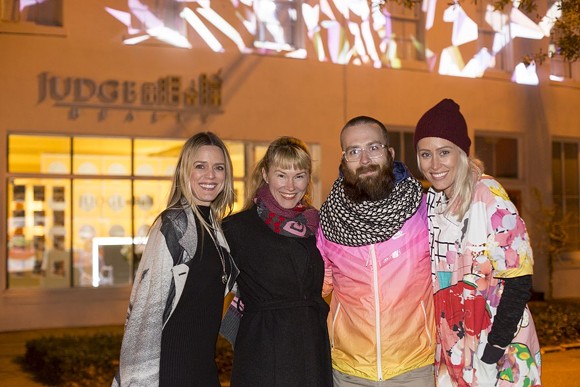 (L to R:) Lori Judge, Susan Laney, Will Penny and Elizabeth Winnel celebrated their collaborative efforts to expand the notion of what public art can mean in Savannah.

After several presentations to the HSMC as well as to the Historic Review Board, last month Wessling was able to secure the Judge Realty as a permanent site for temporary public art.

“This is a historic building that’s being used as a canvas and a pedestal, and we had to ensure that we wouldn’t damage the material or alter the architecture,” explains Wessling, who began lobbying for approval last March.

“Now that we’re over that hurdle, we’d like to host something twice a year, but definitely annually.”

In order to meet the criteria and concerns of the board and commission members, Cody Tharpe of Tharpe Engineering and Paul Miller of Evans General Contractors fabricated a series of invisible aluminum sleeves set into the building near the roofline. The super strong mounting system can support various types of anchors and be capped while not in use.

“The key was creating a matrix that allows for a lot of artistic possibilities,” says Wessling, who received additional input on installation options from curator Susan Laney of Laney Contemporary Fine Art.

“The idea is that we can give artists the guidelines—here’s the weight bearing limit, here are the dimensions—and have them come up with something spectacular.”

For “Intersection,” Penny fastened his projectors inside weatherproof trusses that he designed and built himself.

Mounted from the supporting structures, they revamp the surrounding streetscape with movement and light, transforming a part of Savannah into something never seen before—and after Dec. 28, never seen again.

It’s a notion that had Thursday night’s revelers radiating with an awe that’s bound to carry throughout the month—and if Judge has her way, indefinitely.

Now that a precedent has been set for public art beyond murals and monuments in the city, the potential playing field for artists is wide open.

“The next step would be that the City of Savannah itself would commission pieces,” posits Judge, who suggests a plan that would require developers to fund art with every new contract.

Until then, at least one dream has been realized with the designation of the permanent site on Abercorn.

“I’m excited to see Will’s transformation of the building and what future artists will do,” says Judge.

“There’s nothing in the way of public art in Savannah.”

Plein Air with Will Penny