BEFORE John Berendt wrote about the scandalous side of Savannah, Harry Hervey told the story of the Old Fort Neighborhood in "The Damned Don’t Cry."

If you haven’t heard of the book, you’re not alone—the 1939 potboiler was largely shunned for years because of the uproar it caused.

In conjunction with the Savannah Book Festival, Roberts has coordinated an exhibition based on the book, “Page Rippers,” that opens at Location Gallery this Friday.

“Page Rippers” has twenty local artists who literally ripped a page from the book and illustrated it. Roberts had been dreaming of the idea for a while and ran the idea by some friends, and those interested were invited to participate in the exhibition.

“What I like is that the actual page will be next to the piece, so we’re blurring out the words that aren’t connected to that piece, like dialogue, so the viewer will just read that passage and look at the art,” Roberts explains. “It becomes a longer engagement, a little bit more fun interaction.”

Every piece is 12”x16” and the collection runs the gamut from photography to Washi tape to a bit of sculpture. 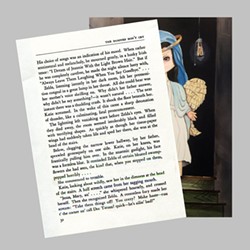 “What I found really interesting was certain artists were like, ‘Wow, this really challenged me and I really love it,’” Roberts says. “They get outside of their own box. It becomes a little bit of a reveal for the artists, a side effect that I didn’t really think about.”

The artwork is being judged Thursday and Friday for how effective the image is in relation to the book.

“The Damned Don’t Cry” follows Zelda O’Brien, a young girl growing up in the Old Fort Neighborhood, the area of Savannah near the Pirate’s House.

During the 1930s, the area was essentially a ghetto of the Irish working class.

“Just like New Orleans, the Irish were brought in to do the brickwork and gruntwork, and then they collected themselves and built their own economic engine,” Roberts explains.

When Zelda falls in love with wealthy Dan Carter, she tries to hide her less-than-stellar upbringing, but fails.

“It’s the unsung Savannah book,” Roberts muses. “Everyone was like, ‘Oh, you’re not gonna do ‘Midnight?’ It’s overdone. I just always thought the book was such an interesting slice of Savannah that we don’t really see anymore.”

Besides the subject matter, the book’s language also makes it scandalous—Roberts warns that it’s definitely not PC.

“Because he was a screenwriter, there’s parts of the book I’m like, ‘Okay, stop writing in this vernacular you think these people should sound like,’” Roberts muses.

The exhibition will be up through the end of the Savannah Book Festival, Feb. 19, and all the pieces will be available for purchase through a silent auction.

Tacos for a cause