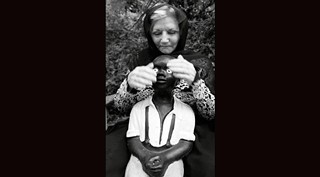 ‘The Artificial N*****' by Marcus Kenney, part of ‘Southern Discomfort' at 1704Lincoln

Art in the Woods Retrospective - The Stillmoreroots Group, an artist collective based in Stillmore, Georgia, will hold a retrospective exhibition documenting their annual all-day art exhibition in the woods of Stillmore, Georgia called Art in the Woods. The retrospective hangs at the Sentient Bean February 3-29. Since the success of the event, the group has seen expansions and transitions of members, more than 20 group shows across Georgia, and an increased focus on rural communities with limited art programs. Sentient Bean, 13 E. Park Ave.

Brian Antoine Woods - Brian Antoine Woods artworks are on display at the Midtown Municipal Building from January 24- June 29. Woods' work illustrates the oral history of his family, the Rakestraws, a generation of settlers, slaves, farmers, and pioneers who experienced the evolution of cotton first-hand. Woods has performed volunteer work and teaching with the 21st Century afterschool program and at the City of Savannah's Department of Cultural Affairs Spring Break art camp. Midtown Municipal Building, 601 E. 66th St.

Girl Scout Centennial Exhibit - Historic images from the collections of the Juliette Gordon Low Birthplace and the Girl Scouts First Headquarters, depicting the Savannah Girl Scouts' interaction with the City of Savannah during the early to mid-20th century, including Girl Scout events at City properties and Girl Scouts with City officials at City Hall. The exhibit will run through June 2012.

In God's Country - The Gallery at St. Paul's presents an exhibition of works by artist Bobi Perry. There will be an artist's reception Sunday, March 4 from 3-5 p.m. which is free and open to the public. St. Paul's Episcopal Church, 1802 Abercorn St.,

SCADDY exhibit - Over 120 of the top student submissions are currently being exhibited through February 10. Gutstein Gallery, 201 E. Broughton St.

Slavery by Another Name - Paintings and Assemblages by Robert Claiborne Morris will be on display in the Drawing Room Gallery of the Telfair Academy from January 6 to March 4. Telfair Academy, 121 Barnard St.