Savannah Jazz to host annual Circle of Friends' Gig May 14

As anticipation for more live events grows like American jazz trumpeter Dizzy Gillespie’s cheeks when he’s playing, Savannah Jazz is hosting their annual Circle of Friends’ Gig on May 14 in the outdoor garden at Ships of the Sea Maritime Museum. Symbolically, the event serves as a warm-up act for the Savannah Jazz Festival in late September. As a practical matter — foreign as that concept may be from jazz — all proceeds from the night of food, drinks, music, and revelry benefit a quintet of worthy causes. The organization itself and its signature festival, a Savannah Jazz History and Hall of Fame Exhibit, monthly concerts and educational efforts are all supported by a night dubbed “Let’s Swing Again!” Not to be missed is vocalist Dolette McDonald fronting the seasoned pros of the Savannah Jazz Hall of Fame Band. Recently featured in Rolling Stone’s Unknown Legends series, McDonald’s resume is absolutely loaded. With a few appearances on disco records to her name, she was hired by David Byrne in 1980 to sing back-up vocals for a band she’d never heard before. The fit was magical, and in short order she was on tour with the Talking Heads from the “Remain in Light” tour through the band’s “Stop Making Sense” era.
click to enlarge 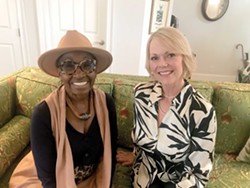 Photo by Frank Ricci
Savannah Jazz Association Executive Director Paula Fogarty and jazz vocalist Dolette McDonald anticipate the return of live events.
This led to ongoing work with countless blockbuster artists including live stints with The Police, Sting and Steve Winwood. In the studio McDonald lent her talents to a broad range of styles from rock and roll with the Rolling Stones, to the R&B of Chic, to the avant-garde oddities of Laurie Anderson. At the Circle of Friends’ Gig, McDonald promises “a lot of fun, a lot of standards that are danceable, up tempo … it’s gonna be pretty cool.” McDonald and Fogarty both emphasize the event is referred to as a “gig” on purpose. “We don’t call these galas or black-tie events; this is a gig – a fun, swinging gig, a free-for-all in the spirit of jazz and friendship.” Fogarty said. “You’ll leave with more friends than when you arrived.” “It’s time to feel good again,” McDonald added. In addition to the live music, a number of items and events will be auctioned off including a jazz weekend getaway to Charleston, South Carolina; art; vintage wine; musical instruments and other themed experiences. Last year, the 2020 Circle of Friends’ Gig fell victim to pandemic restrictions. Determined to save the 2020 Savannah Jazz Festival from the same fate, Executive Director Paula Fogarty and her team started jamming with WSAV and Dick Broadcasting to work out a programming method that satisfied limited gathering rules, and a marketing strategy that exploited the global reach of live streaming. With countless obstacles and new technical challenges overcome, the city was impressed and approved. “It really fit with the mission of our organization,” Fogarty said. “In jazz music, the biggest components are collaboration and improvisation. Well, we did a lot of collaborating and improvising!” “What I felt in the room with the board was the passion,” McDonald added. “The city gave us full funding because we came back with a massive plan,” Fogarty said. Massive enough to more than triple the typical live attendance average of 50,000. Limited to 50 people gathered outdoors at the 16 performances, the internet audience reached 175,000 people bopping their heads on every continent except Antarctica. The wider audience is welcome to an organization that has ambitious plans to spread the sound. The 2021 Savannah Jazz Festival, Sept. 21–26, is scheduled to hold 25 events including movies, master classes and, of course, live performances. The usual crowds of 10,000 or more at Forsyth Park may be curtailed, it remains to be seen. Regardless, the event will be a hybrid of live and streaming. As always, the entire six-day event is free of charge. Another endeavor is the Savannah Jazz History and Hall of Fame Exhibit. The Hostess City has a jazz history as old as New Orleans, but rarely told. Most casual fans know of Johnny Mercer’s Savannah roots, but other giants such as James Moody and Joe “King” Oliver, who Louis Armstrong called his mentor, have deep roots in Savannah jazz and stories worth telling. The live scene was certainly hopping. “In the heyday of Savannah jazz in the ‘30s and ‘40s, there were more than 70 venues downtown featuring live music,” Fogarty said. Music-loving Savannahians can support the cause with a membership to Savannah Jazz. Starting at $50 annually for an individual, or $75 for a couple, the 10 free yearly concerts make it an exceptional bargain. The Savannah Jazz Circle of Friends’ Gig gets down on May 14, 6:30 p.m. at Ships of the Sea Maritime Museum, 41 Martin Luther King Jr. Blvd. Individual tickets start at $75 and are available at savannahjazz.org. 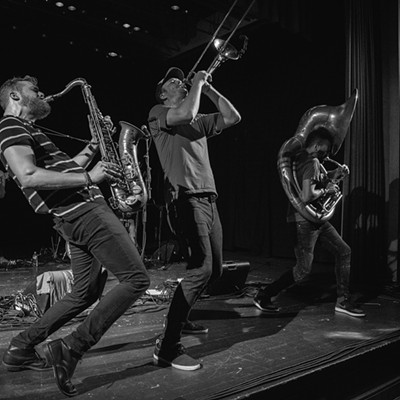 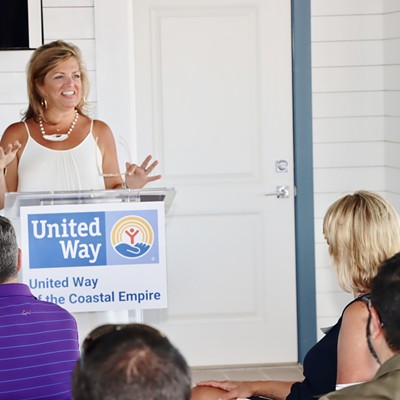