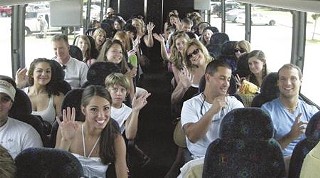 Bill DeYoung
The magical mystery tour is coming to take you away: Happy extras on the bus to the Tybee Island set.

I applied to work as an extra on The Last Song, was accepted, and for 10 hours I did everything asked of me as the Disney cameras followed Miley Cyrus up and down Tybee Beach.

Then, without explanation, I was forcibly removed from the set, publicly embarrassed and threatened.

I still don't know how it happened.

Extras are essentially human furniture. As the actors speak their lines, and do whatever the script requires them to do, we're in the background, walking and chatting and behaving like regular people would behave.

Except that we have to do it again and again and again, proceeding from Point A to Point B, as the actors (and the backgrounds) are photographed from every imaginable angle.

I'm an old pro, having worked as an extra on Doc Hollywood, G.I. Jane and the eminently forgettable TV drama Miracle Child.

On June 19, I was one of 200 people "attending" the (fictitious) Tybee Island Seafood Festival. Miley was there, and we watched her -- in character as plucky teen Ronnie Miller -- stroll up and down the pier, and the beach, a hundred times. Each time, we did our extra thing and tried to pretend there wasn't a camera.

There were children with their parents, a lot of teen-age girls, some older couples and a few stray adults (I was among the latter). I met a lot of wonderful people, including Tybee residents John and Gail Pomeroy, and their friends Chris and Melissa Freeman. They'd signed up, too, curious about the experience, and we wound up on the sand together, walking back and forth along the outer perimeter of the "carnival" set.

We'd started at 2 p.m., and the afternoon went well, although at one point I nearly passed out from the heat and spent about 20 minutes in a paramedics' truck, being re-hydrated.

Kevin, the Last Song medic, was a great guy, and he made sure I was treated well. He delivered me to the paramedics, and when I got the all-clear, he walked me back onto the set.

In fact, everyone on the crew looked out for the extras, all day long. Bottled water was plentiful. They couldn't have been nicer.

The trouble started many hours later, about 10:30. I'd been called to the end of the Tybee pier, and with another extra - a very funny guy I'd just met named David -- I walked back and forth in front of the camera as Miley and her co-star Carly Chaikin acted out a nighttime scene, sitting on the pier with their backs to the neon carnival rides that spun in the distance.

Yes, kids, I stood about four feet away from her. I heard her dialogue so often I could almost repeat it, line for line.

We had done this about 12 times, and as the camera was being re-positioned for a different angle, a man I'd never seen walked up to me and got right in my face. He said "Sir, may I ask why you're out here?" I told him I was an extra, and had been told to stick around for another shot.

He said "I am Miley's security, and I have been told you made an untoward remark about her earlier today."

"What?" I said incredulously.

"Someone -- I won't say who -- brought it to my attention that you made a remark today. I've been looking for you."

I wracked my brain. The most "untoward" thing I might have said was a quiet admission to my friends that I'd never seen Hannah Montana and never heard the girl sing.

I have no grudge against Miley Cyrus. She seemed nice enough. And, except for the brief episode with the heat - nobody's fault but my own -- I'd been having a pretty great day.

The man took down my name, address, phone number and date of birth, then disappeared into the darkness down the pier. Dave came over and asked me what had happened. "I truly don't know," I replied, because I really didn't. I told him the story.

A misunderstanding, of course. I calmed down and prepared to go back to work.

About 10 minutes later the "security" guy was back, accompanied by two uniformed Tybee police officers. "Sir, these officers are going to escort you off the set," was all he said. It was clear I had no say in the matter.

He still wouldn't tell me what I had supposedly done. He pushed me along, his arm around my waist. I was led, one officer on each side, through the throngs of extras - many of whom I'd become friendly with during the long day. There were John and Gail, and Chris and Melissa. Mylon Gladden, a soldier I'd walked and talked with, along with chatty 8-year-old Tyra Watts from Charleston, who was there with her mother, Patty. In fact, Tyra, Mylon and I had been together for a big chunk of the afternoon - a little "extra family" on the beach.

They stared; I shrugged. It was massively embarrassing.

I was delivered to "Home Base," where the film company trucks and trailers were located. A burly fellow said "Is this the guy?," meaning me, and proceeded to tell me I was being evicted from the premises, and I had better get going. He was going to put me on an outgoing charter bus for Wilmington Island, where we'd all met up and where my car was parked.

I had to retrieve a bag of clothes from the extras' holding area, and he walked me over there, sticking unnervingly close. Trying again to find a sympathetic ear, I asked, "Do you have any idea what all of this is about?"

His response: "How hammered are you?"

How hammered are you? Well, I'd recently had a nice chicken-and-rice dinner, with ice water, with my fellow extras, provided by the film company. Before that, I'd been in the sun all day, doing my best for Miley Cyrus.

How hammered was I?

I was led to a waiting bus, packed with young children and their mothers, and he left me with this:

"If you make a commotion on the bus, you will be arrested."

"If you attempt to get off the bus, you will be arrested."

"If you attempt to return to the set, you will be arrested."

He watched me board the bus.

Now, I had quietly confessed to several of my fellow extras that I was a writer and was planning to journal my experience working as an extra.

I had a tiny camera in my pocket, and had photographed the empty carnival set. Lots of the extras carried cameras and did the same thing - during set-ups, never while we were working. I also recorded brief comments from my new friends on a little digital recorder I carried.

Don't take Miley's picture, we'd all been told before the festivities had begun. That would have been a cardinal sin, and I fully understood why. I wouldn't have pulled out my camera within a mile of the girl. Like everybody else, I was respectful, and I knew I was only there to work. Which is what I did.

So why the criminal treatment?

The nearest I can figure is that somebody on the set overheard me when I told Dave I had decided to write a story, which set off an alarm somewhere. Why not just ask me? Instead, I got "untoward" and "hammered."

But nothing in the forms I'd signed asked about my profession, or said "anyone who happens to be a writer cannot work as an extra."

I heard later that Tybee police had been called to take at least three other people off the set that night.

Was this an over-reaction by security people stretched to the limit by "protecting" a massively famous teenage star? Was I getting a rare look at the dark side of Disney?

Was the "hammered" guy a local security cop with a swelled head, doing a Barney Fife?

I don't think it matters. The movie got made, and I got the bum's rush.

But will I end up in the finished film? That's the question.