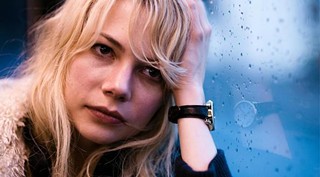 Since its premiere last January at Sundance, Derek Cianfrance’s Blue Valentine has been snowballing down the big hill of industry buzz – it was the talk of Cannes, Toronto, London, New Orleans and just about every other international film festival this year.

Cianfrance, with just one other feature film on his resume (1998’s Brother Tied), wrote and directed this emotionally wrenching story of a married couple (Ryan Gosling and Michelle Williams) whose relationship is coming to a painful close.

Blue Valentine moves back and forth through time, as Dean and Cindy experience that heady first rush of flirtation and fun, get married, have a child and, ultimately, succumb to the inevitability of age, experience and disillusionment.

Between features, Cianfrance has made a living shooting documentary films, and – as he says in this interview – that cinema verite experience paid off in dividends for Blue Valentine.

The Motion Picture Association of America, which assigns ratings to films, gave Blue Valentine the dreaded NC–17 rating, reportedly because of a drunken sex scene between Gosling and Williams, as Dean and Cindy desperately try to repair their broken bond by spending the night at a “theme” motel.

Films with an NC–17 rarely attract advertisers, and the public tends to see the rating as a “stay away” warning.

The Weinstein Company, which will begin a national platform release Dec. 31 (to qualify for Academy Award consideration), is appealing the rating. The case is scheduled to be heard this month in Los Angeles.

You got slapped with an NC–17. What’s up with that?

Derek Cianfrance: I have yet to find someone who’s seen the film that agrees with it. I think we were all pretty shocked when the decision was handed down. Because the movie is not an exploitation film. It’s intimate, and it’s emotional, and so we’re appealing it and hopefully we can convince the MPAA that it shouldn’t have an NC–17. Because it really shouldn’t, and I think there are multiple examples out there that will support our case.

The best thing about this NC–17 thing so far has been the support that we’ve gotten from the industry, and from the press, and from fans, basically. It’s just been great that people have been so on the side of the film.

Did the MPAA tell you specifically what their problem is?

Derek Cianfrance: No, they have not. Have you seen that Kirby Dick documentary This Film is Not Yet Rated? It’s interesting. I watched it the other night.

We respect the MPAA. We respect their work, you know? We just think that this is the wrong decision. Hopefully we can work with them, and prove it to ‘em.

Those who’ve seen the film say there’s no arch violence in it, and – I quote – nobody gets naked. It’s about intimacy. I don’t get it.

Derek Cianfrance: I don’t get it either. It’s a conservative America right now, unless you’re talking about violence. Violence is the thing that people are desensitized to, but intimacy between two people? I don’t know.

I’ve been following the blogs where people are up in arms: “How can The Human Centipede get an R, and this thing gets an NC–17?”

I don’t believe in censorship in any way. But I will say my kids see far worse watching commercials. We watch Denver Broncos football every Sunday – because I’m from Colorado – and I have to turn off the commercials for them, because it’s too much for them. It’s all violent. Guns, you know, it doesn’t matter: Ten thousand people can get mowed down with a machine gun.

Girls can get raped and eviscerated, hanging upside down, and it’s R–rated, you know?

Do you think the people who decide these things are afraid of reality? Of your portrait of reality?

Derek Cianfrance: I’d hate to speak for them, but I will say that that was the intention of our film, was to make something honest, and that people could see themselves in. And that people could find situations they don’t normally see on a movie screen. Moments where it was out of the realm of fantasy, and into the realm of intimate reality. And these moments that you only share with your loved ones.

The first film I made was Brother Tied, it’s about brothers. This film is about husbands and wives. My next film, The Place Beyond the Pines, is going to be about fathers and sons. I think I’m so interested in telling stories about families because in families I think you see the honesty in people. There’s no facade left in a family. There’s no fakeness. With a family, you really get to know the light and dark side of people. Because you’re so intimate and close with them.

And this movie is a movie about family and a relationship.

Of course, when you meet someone for the first time, they’re going to be smiling and trying to make a good impression. And that definitely happens in Blue Valentine when they meet each other.

But after this couple has lived together for six years, there’s demons inside both of these people. And those demons come out.

There’s a hand–held, documentary feel to the footage I’ve seen. Has making documentaries influenced the way you shot the movie?

Derek Cianfrance: Absolutely. In the 12 years that I was trying to make this film, I wrote 66 drafts of the script. I had storyboarded 1,200 shots, and there were these epic, sweeping shots.

And over those years, as I wasn’t making this film, my bread and butter became documentaries. And as a documentary filmmaker, I learned how to listen. I think there’s the archetypal image of the narrative filmmaker, the director – like the Cecil B. DeMille guy, the guy with the megaphone who’s projecting his voice and pointing his finger.

When I was shooting documentaries, I was training myself to find living, breathing moments. Because in documentaries, you don’t get a Take 2 sometimes. You have to be so sharp and precise, and your instincts have to be on to find things as they happen.

So when it came time to make this film, I threw all my preparations away. The danger was that it would come off as flat and not alive. I like living films; I like moments that are really happening.

How did you impart this to your actors?

Derek Cianfrance: My initial direction to the actors was “Surprise me.” It was “Let’s do the script, but let’s break it. Let’s fail greatly together. Let’s do things that are gonna be embarrassing, and if we can do those embarrassing things we can also do great things.”

I set up a rule with them that there were no bad ideas. That meant everyone could give things without judgement.

Derek Cianfrance: Well, I consider Ryan and Michelle to be co–writers, I’ll say that first. Because I spent about seven years talking with Michelle about this film, and about five years with Ryan, and after my meetings with them over the years I would be so inspired that I would go home and re–write the script, based on our conversations. So that’s one level.

And once we got to shooting, we tried to – again – keep it alive. And yes, we were all bringing personal things to it. And we were letting the moment live.

In the scene where they’re walking along the bridge, Michelle’s character Cindy has a secret. In the script it was basically two pages of dialogue where she’s telling Dean what was going on with her.

Right before we started to shoot I went over to Michelle and I said “Michelle, throw away all the dialogue. Don’t use any of the dialogue.” I said “Here’s the only thing you have to do now: Don’t tell him your secret. Whatever you do, don’t tell him what’s going on.”

We’re 45 minutes or so into shooting, walking back and forth across the Manhattan Bridge, the sun is setting, and Michelle is staying strong. And we’re burning a lot of film, and she will not give it up to him.

Finally Ryan, so frustrated, starts climbing the fence on the Manhattan Bridge. There’s no safety net, there’s no stunt double, he’s 300 feet above the water. We don’t have insurance for that kind of thing. And he’s scared of heights.

Thankfully, in that moment, Michelle tells him what her secret is. Thankfully she does, because with Ryan being the kind of guy that he is, who knows how far he will keep going.

My producer came running over - it’s a long bridge, and thankfully he’s out of shape so it took him a while. And he shuts us down for the day.

Ryan and I gave each other high–fives, because we had gotten the moment.

The actors, then, were game for all this?

Derek Cianfrance: I just hate fake moments. The first scene in the movie shows them waking up. We had them go to sleep, and we set up cameras in the house, and around them. At 5 a.m. I was up, and I texted on silent mode to my A.D. who was outside with the girl who plays their daughter. I said OK, send her in. We were rolling.

She comes in through the dog door, and she wakes up Ryan. And we actually have him waking up onscreen. I feel like audiences nowadays are so sharp with moments – they watch YouTube and they see these incredible moments – and I feel like they know when you’re pulling the wool over their eyes.

We would always just try to set up moments where it’s alive, you know?

Blue Valentine will be screened at 7 p.m. Thursday, Nov. 4 at the Trustees Theater.