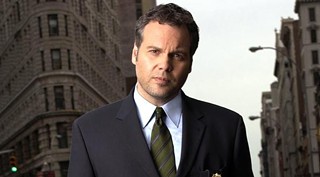 Although television — more specifically, Law and Order: Criminal Intent — has been his bread and butter for the past nine years, actor Vincent D’Onofrio is making a concerted effort to get back to his first love, the movies.

Before he began his successful stint as Det. Robert Goren on the long–running TV drama, D’Onofrio turned heads with performances in Full Metal Jacket, Men in Black, The Whole Wide World and The Dangerous Lives of Altar Boys, among others.

He’s coming to the Savannah Film Festival Tuesday with Don’t Go In the Woods, his feature–film directorial debut.

D’Onofrio, 51, wraps up his detective duties during the final season of Criminal Intent – he’ll make just eight “guest” appearances starting in January – then heads immediately into his next directing gig, a family drama called Johnny and Me, about a man obsessed with the music of Johnny Cash.

Don’t Go in the Woods is a horror movie. A group of hip young musicians head to the pineys to “get away from it all” and write songs for their next album. But there are unexpected visitors, including a group of girlfriends who bring unwanted distraction to the band.

And there’s something – or somebody – else in the woods.

Your first feature as a director. Why a horror movie?

Vincent D’Onofrio: I was dealing with the Johnny Cash estate – the lawyers and everything, to clear the music rights – and they love the script, but we have to do a lot of dotting I’s and crossing T’s kind of stuff. And that was taking a long time. And I just wanted to shoot a movie, because I really like to shoot. I had made a short and really enjoyed that.

We have this property upstate, a house in upstate New York, and my wife and I were driving back. I was talking to her about really wanting to shoot another film, and we started thinking about what we have, what friends we have, and how we could do it for cheap. And where and stuff.

And we came up with that, because I have 100 acres of woods upstate. One of my closest friends is a really amazing lyricist and composer, Sam Bisbee. And I have all these writer friends, and a crew that’s very loyal – we’re all loyal to each other. And I thought of this story of doing a horror musical.

You used non–actors to fill the roles. Isn’t there a gamble in that?

Vincent D’Onofrio: I think for this type of film, I was always confident that it would work for the film, rather than against it. Because the truth is that unless there’s like a major actor in a horror film, the performances are pretty flat and pretty inexperienced anyway. What it does is give it a certain feel. It gives the movie a certain kind of B–movie feel, which I like a lot. Kind of that “slacker” feel that Linklater and Smith were doing back in the day.

I think flat is better than overacting. I was confident that if I cast unknown actors, and I got them to just trust me, that we would be able to get away with it in that way.

These kids were very confident, so there weren’t a lot of re–takes. They trusted me completely. I talked to each of them about who they are, as people, and that’s what I want in the movie. They didn’t need to put on airs or act in a different voice, or do anything silly like that.

Vincent D’Onofrio: We’re talking about a couple of weeks – 12 days of shooting, and a couple weeks of post. I took my time with the editing because I could. I didn’t have anybody over me or my film. I re–cut it a few times – we only had so much footage, there was only so much I could do, so I wanted to use whatever we had to its potential.

There is a semi–classic old horror film called Don’t Go in the Woods. How much of that is in your movie – or was it just “I used the title”?

Vincent D’Onofrio: I didn’t know about the other film, actually. I’m not a big horror genre person. I had no idea about it. So it’s nothing like that movie. I’ve never seen that movie, so I can’t imagine it’s anything like it. I really just thought of the title at the same time I thought of the story.

The people that play the musicians – are they a real band?

Vincent D’Onofrio: Three of the guys were a real band called The Dirty Dirty. But they’re not a real band any more, ‘cause they’re young and they like to do many different things. And some of the women in the film are friends of theirs. Some they didn’t know at all.

At some of the screenings of Don’t Go in the Woods, they come with me and play the songs from the movie for the audience.

When they play together, they’re a really tight band. They’re very impressive kids, I gotta tell you.

What’s next for Vincent D’Onofrio the actor?

Vincent D’Onofrio: Since I’ve left the show, I’ve been very busy doing my own stuff. I’ve done a couple of parts when my friends who are directors have asked me. I think before the end of the year I’m going to start to pursue roles in movies again. You know, decent roles.

And once I do that, we’ll see if I’m going to be acting in film again. I don’t know! It’s a funky business. You just don’t know. The only thing, you can’t be as desperate. You have to do your own thing. I decided a long time ago, when I was a kid, to not be desperate and to do what I felt like doing. And that everything would be OK if I did it to my fullest. It’s always kind of worked with me, even with the TV show.

After such a long run as a character on TV, do you worry that you might be typecast?

Vincent D’Onofrio: I don’t think about it in those terms. I’m reminded, every time I go to buy milk on the corner, that the fans of the show think of me as the character of Goren. But the business is much more educated and a lot different from when I first started.

What people really care about is whether or not you can make them money. I think that if they believe you can sell their film, or help that film get sold, then you’re going to be cast in that movie. It doesn’t matter what you’ve done before.

I think if you have a decent reputation as an actor – that’s something I’ve been able to keep, which I’m very happy about – and people think that you’re gonna help them, then you get cast in movies. That’s what it’s all about.