"if you're not enjoying this gig, then something is really wrong" 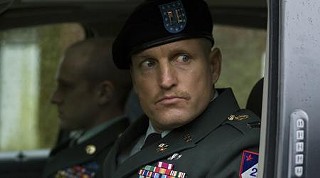 In The Messenger, Woody Harrelson plays Captain Tony Stone, a veteran of the Iraq war who handles casualty notifications back home — a job he both relishes and despises.

It’s another tour de force from this charismatic actor, whose portrayals of tightly–wound, envelope–pushing characters have singled him out as one of moviedom’s most eminently watchable performers.

He showed up on the radar, of course, via TV’s Cheers, where he played loopy bartender Woody Boyd for eight seasons, winning an Emmy Award in the process. Harrelson hit the movies when the series ended in the early ‘90s and hasn’t looked back.

Harrelson, his Messenger co–star Ben Foster and the film’s writer/director Oren Moverman will be at the Savannah Film Festival Saturday. The Messenger is the opening–night film, and both actors are to receive tributes from the festival following the screening.

Well–known as an arch-environmentalist, a passionate vegan and a vocal advocate for the practical applications of hemp, the 48–year–old Harrelson lives in Hawaii with his wife and three young daughters (he calls them his “Goddess Trilogy”).

Ben Foster, your co–star in The Messenger, said some nice things about you. I’d like to ask you about him.

Woody Harrelson: I think he’s one of the finest actors alive. He’s young and he has a big career ahead of him. Working with him is like a dream, I can tell you. He’s really serious about his craft. In the place his character was living in, in The Messenger, for the first week we were shooting around there — I found out, at the end of the week, that he was living there. He actually was living in that apartment in New Jersey.

He goes the whole hog, and I can’t think of anyone who commits more. But there are some who commit as much. He reminds me in that sense of Sean Penn, just the greats who really throw themselves completely into it. And it pays off, because I think his performance is one of the finest I’ve ever seen.

Why was doing The Messenger important to you?

Woody Harrelson: I just felt it was one of the most beautifully crafted, powerful scripts I’d ever read. You know, it’s obviously about a very sensitive subject. Because this war is affecting a lot of people’s lives. I don’t think I would have been as attracted to it if it was one of these films that was definitively pro– or anti–war, but it’s not. It’s just kind of observing this aspect of what goes on.

I feel like maybe it’s the movie I’m most proud of being a part of. Because I feel like not only is it pretty amazing entertainment, it’s a film that matters. It’s really about something substantial. I was really psyched to be a part of it.

Is that the sort of thing you look for — a film with a little something extra?

Woody Harrelson: To me, it isn’t imperative to do a movie that makes you think, or that is controversial, or maybe helps shift people’s thinking. I don’t really feel like I need to be in that kind of film — not that this does shift your thinking, necessarily, but it it’s one of those that will make you look at things differently.

I also think movies just for pure entertainment value are worthwhile. I love that Zombieland just makes people laugh. To me, it isn’t necessary that it has some huge message, you know?

This new slate of films arrives after you took a few years off. Why did you do that?

Woody Harrelson: I was at a place in my life where I really wasn’t enjoying what I was doing. I was going from movie to movie. And if you’re not enjoying this gig, then something is really wrong. Because it’s about as cool a gig as you get. It is hard work — you’re going to work 12, 14 hour days in five or six–day weeks. I think I just kinda got burned out on it. I just needed to step back. I had kids at that point, and I felt like I wasn’t spending enough time with them. So that was a big part of the decision for me.

Did you ever think, “I can’t stop working — that’ll make it harder to go back”?

Woody Harrelson: I honestly didn’t think I was going to take five years off. I thought probably two or three. But either way — it’s easy, in a year you can become pretty irrelevant in this business. But it was probably one of the better decisions I’ve ever made.

Even though when I did come back, it was almost like starting at ground zero. Not literally, but if I was a completely unknown actor it would have been a little more difficult. But I’m glad I did it, because I got tons of time with my family on a beautiful island in the Pacific. We were having a ball.

Did you get burned out on celebrity: “ I need to get over myself”?

Woody Harrelson: Yeah. Prior to that, we had moved to Costa Rica, and I was already in that mindset of trying to get away from celebrity and this kind of illusory game. It just didn’t feel real to me. And yeah, I think I had a lot to deal with, just myself emotionally. I wanted to be a better person. And I think it helped getting time away.

Going all the way back to Indecent Proposal. I was thinking, that was your first — and to date, only — role as romantic leading man.

Woody Harrelson: Yeah! I don’t think there has been one, before or since. Actually, I think Natural Born Killers was a kind of misunderstood romantic comedy. But other than that... yeah, that is a strange thing! ‘Cause I love the idea of doing a romantic comedy, but that’s one genre that seems to be missing from my filmography. Maybe it’s just that the scripts don’t come to me like that, and people just can’t see me as the romantic lead in a movie. I’ll just have to write my own deal.

Do you think people say “We need a slightly eccentric guy who can do this intense thing... let’s talk to Woody Harrelson!?”

Woody Harrelson: (Laughing) That’s nice that you said slightly. That makes me feel a little better.

I don’t know how people really... there’s been a wide range of scripts come my way, so... I at least feel good about the fact that there was quite a number of years where I never thought I’d break out of Cheers, or do any other part besides Woody Boyd. Which is a good part, but I always felt like I could do something else.

Not withstanding that whole weird thing about not getting romantic comedy–type leads, I still feel pretty good about the roles that are coming my way.

Considering all the film work you’ve done, it surprises me that some people will still say “Oh, he was great on Cheers.” Do you still get that?

Woody Harrelson: Oh yeah, yeah. Some people probably never saw me in anything but that. There’s nothing I can do about that. I can try to insist, hey, IMDB me! It’s still good if people liked that show. I loved it.

Woody Harrelson: I would definitely say Larry Flynt, probably Natural Born Killers. I did one that nobody saw called The Hi–Lo Country, but you can’t even get that on DVD. So that’s a hard one to see. But it’s Stephen Frears, with Billy Crudup and Patricia Arquette. And it was actually Penelope Cruz’s first American movie. That one was great.

I like this movie The Prizewinner of Defiance, Ohio, I thought was fantastic. But that again was a movie nobody saw. Turn’s out it’s my mom’s favorite. That’s the one she sends to people.

And I’d definitely put The Messenger up there. It’s certainly one of my favorite movies — probably my favorite — that I’ve been a part of. Another one coming out after this called Defendor, I’m quite proud of. You lose track after a while. Maybe White Men Can’t Jump, too.

Next month, you’ll be onscreen in the big “end of the world” drama 2012. Tell me about it.

Woody Harrelson: It’s (director) Roland Emmerich doing what he does best. I’d say it’s his best film; to me it’s a more complete film, especially in terms of the story really working, and you really care about the characters.

It is a mind–blowing visual spectacle. You can’t even believe what you’re seeing. You know, some directors — the Michael Bays and some of these guys — are capable of doing some amazing things visually, but this one, I don’t think I’ve ever seen anything close to it. It is a mind–numbing, mind–blowing experience to watch it. cs