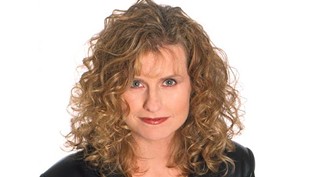 Irish music, says Cathie Ryan, "was the soundtrack of my childhood. The house was always full of music."

For eight years, Cathie Ryan was a lead singer and bodhran player for Cherish the Ladies, an all–woman Celtic music group from New York City. She went out on her own in 1995, and has since established — and enforced — her own identity.

The Chicago–based Irish American News named Ryan Irish Female Vocalist of the Decade; Billboard called her "enchanting.” And then there’s this famous endorsement from the Wall Street Journal, that go–to paper for advice on all things Celtic: “Anyone wondering what constitutes excellence in Irish American singing today need only attend a Cathie Ryan concert.”

Heady praise indeed, but Ryan, who’ll perform at Saturday’s Tara Feis Celebration, is quick to give credit to the members of her touring band – Patsy O’Brien on guitar and vocals, fiddle and trumpet player Matt Mancuso and percussionist Brian Melick.

Cathie Ryan was born and raised in Detroit, where her Irish immigrant father worked on the assembly line at General Motors.

You grew up the daughter of first generation Irish parents. Was this a case of ‘You can take the family out of Ireland, but you can’t take Ireland out of the family’?

Cathie Ryan: The music was the soundtrack of my childhood. The house was always full of music – and thank God Johnny Cash and Creedence Clearwater got in there! The two Johnnys.

We went to Ireland every summer, and my grandmother Ryan – like my father – was a singer. No TV. We would sit in the evenings and she would start singing and she’d take out the fiddle and play. The neighbors would come in and they’d move the table back – there was no center island in the kitchen – and before the night was over everyone would be dancing ‘round the kitchen.

I was very lucky that both of my parents came from gathering houses, houses where people went to socialize in the evenings. My maternal grandfather Rice lived in Kerry, and he was a seanachie, or a storyteller. Again, there was no TV in his house. He would tell stories all night. And the summer evenings were so long, he would just go from story to story to story ... and as it began to get dark, he would tell stories about ghosts and the Pooka. He would terrorize us, but we sat there mesmerized at his feet, every summer. We were really blessed.

But back in Detroit you were rocking out? Wasn’t there something of a culture clash?

But it was a wonderful blending of the old world and the new world. Crossing over and back was very easy, and I think that’s true because the mythology is like that as well. Celtic mythology – the other worlds – there’s a very thin veil between this world and that world. I mean, that’s where Halloween came from. It was the Celtic New Year, the time when all the old spirits came to visit you. And you dressed up so they wouldn’t recognize you.

One thing I loved about growing up in an Irish community, even in Detroit: We were always at the Gaelic League, an Irish–American club downtown by Tiger Stadium. And we never just socialized with kids our age. We would sit and sing songs into the evening with people our own age, and then 20–year–olds, 30–year–olds, 80–year–olds. And I loved that sense of community, of belonging, especially when I went through the horrors of adolescence. Going to the Gaelic League made me feel I was part of the human race.

Was there a defining moment when you decided that music was to be it for you?

Cathie Ryan: I left college because I was married and pregnant. Eventually I went back and got my degree, and I taught at the college level for three semesters. I was singing, too. And then I had to make the decision: Do I want to go on the road as a musician, or do I want to be a teacher? And I chose music. It had already chosen me, I think, before I made the decision.

Do you and your band play across the pond as well?

Cathie Ryan: I play mostly in mainland Europe. There’s no point in playing in Ireland when you can go hear music for nothing. But I do my requisite few gigs a year in Ireland. I play in the U.K., too, but mostly Austria, Germany, Switzerland, Italy.

They are mad about Irish music in Austria and Germany.

Cathie Ryan: The German national music is kind of more oom–pah–pah ... I think Irish music covers such a length and breadth of human emotion. All of it, from tremendous, heart–rending sorrow in some of the songs, to this rafter–raising, spirit–to–the–wall energy of the jigs and the reels. And everything in between. And I think it moves people. It moves their spirits.

In Austria, you could sing slow ballads all night, and they would be transfixed. Whereas in America, I really like to mix it up – do a couple of lovely, slow, moving songs, and then just rev it up with the tunes. And then bring it back a little bit.

What is it that’s so universal about Celtic music? Does it reach in and touch a nerve?

Cathie Ryan: Well, they say that the Celtic DNA is the oldest strain they’ve been able to identify, so maybe you’re onto something!

I find that when you listen to the old–style Irish singers, and then you listen to a traditional singer from the hinterlands of India, or the Maori in Australia ... there’s something very primal about the expression of emotion in Irish music.

I think it’s a very spiritual quality that is in us, innately as human beings, and I think that’s what gets triggered. It’s primal roots music