Chabad of Savannah, the Savannah Jewish Federation and the City of Savannah present a special holiday celebration taking place at Forsyth Park on Dec. 18 at 3:30 p.m. The event, Chanukah at Forsyth, will be a community-wide celebration featuring entertainment, activities and holiday fun for the whole family.

Attendees can look forward to a wide array of holiday foods including donuts, latkas, Isreally hummus and more. There will be plenty of fun activities for children like dreidel making, menorah crafts, inflatable rides and face painting. The family-friendly event will also feature a 360 photo booth, airbrush kippahs, a slapshot cage and a giant menorah.

Chanukah at Forsyth will also have live entertainment that’s sure to get the crowd moving. Acclaimed Jewish rapper Nissim Black will take the stage at the event. Black is known for his energetic performances and uplifting lyrics, and he’s looking forward to making his Savannah debut. It will actually be his first time in Georgia let alone the Hostess City.

“Everyone wants to go visit the place that Ray Charles sang about, right? So I’m really excited. There’s a lot of history and beautiful things in Georgia,” he said.

Originally from Seattle, Washington, Black relocated with his wife and children to Jerusalem about seven years ago, and he’s currently touring internationally. His passion for music predates his birth, coming from a musical family.

“My mother and father were both rappers. They pioneered hip hop actually in Seattle. They were a part of the first hip hop groups there, Emerald Street Boys and Emerald Street Girls. . . And even before then, my grandfather played with Quincy Jones, and my uncle played with Ray Charles. I come from a very musical background. So I don’t think there ever was a time where I wasn’t into music,” Black recounted.

He recorded his first song around the age of 13 and has been making music pretty much ever since. Black describes his music as “fire, uplifting energy, explosive and very honest.” His music has changed significantly over the years. Black started as a gangster rapper with gang affiliations but has turned his life around completely through a faith journey that led him to Judaism.

“My life has changed tremendously. A few years ago, I had the opportunity of sitting out in my old rooms, and I popped in a tape of myself from like 15 years ago. I didn’t even recognize that guy. And honestly, I don’t even know if I could stand in the same room with that guy today,” he laughed. “It’s been very awesome for me, the radical change from where I’ve come from.”

The music Black makes now reflects his spirituality, and he hopes to make a positive impact through his songs.

“My impact is light, to fill the world up with light. Especially after coming off a year like 2020 with all the dissension and division and darkness that I felt like enveloped the world. . . It’s been very important to have messages of inspiration and hope that uplift people. I want to make that song that stops that teenage kid from taking their life, so just being able to have that positive impact on society,” Black expressed.

Black hopes to spread light and positivity during his performance at Forsyth, and to every crowd he’ll face while he tours.

“Hopefully we will laugh together, we’ll smile. We’ll cry together. I always say it’s a wonderful opportunity you have as a musician . . . to some degree, you’re in control over the listener. Meaning that that person is listening to your music and you have a very serious obligation to be able to put forth messages and ideas into their mind. So we shouldn’t take it lightly. . . My biggest thing is always to be as real and as open and as honest with the audience as I possibly can in order to be able to leave an impression of my heart . . .  because who knows if I’ll get to see the same people again. So I don’t take it lightly,” he shared.

Black is glad to be able to help Savannahians celebrate Chanukah this holiday season. For him, the eight-day Jewish festival is all about spreading light.

“Chanukah . . . is a time to take a little bit of light and dispel a whole lot of darkness. . . One little match can illuminate a room. . . We celebrate the victory of the Jewish people. . . It’s really the story of all the underdogs no matter what nation they’re from. It’s the festival of the underdogs taking on the rest of the world. And you don’t have anything on your side except for the strength of God. . . But when you go with that, you can [overcome anything],” Black described.

He encourages everyone to come out and enjoy his performance and all the fun festivities during Chanukah at Forsyth. The celebration is free and open to the public. To learn more about this event, visit jewishsav.org.

Chantel Britton is a compelling storyteller with an ever-growing curiosity. She's built a rewarding writing career for herself in addition to serving five years as a Public Affairs Officer in the U.S. Army Reserve. She's an NPR nerd with a deep passion for all things travel, sustainable living and adventure. She... 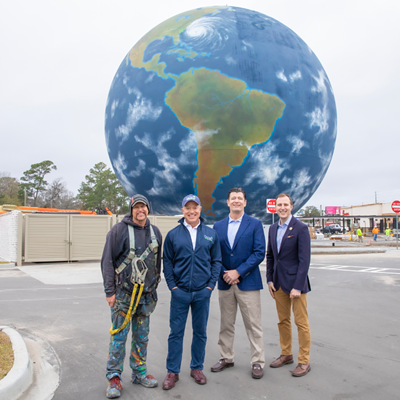