One of Savannah's hottest vintage bands takes the stage again 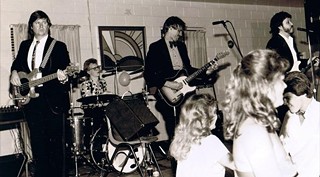 Nearly 150 people turned up at the Veraflames’ reunion gig at Loco’s in early July. Not bad for a band that hadn’t seen the inside of a club – more or less – in a quarter century.

“It brought back a lot of old memories,” singer/guitarist Thad Strickland recalls. “Most of the people that were there, I had seen before. And many years ago. So it was very refreshing to be exposed to that again.”

From approximately 1979 to 1985, the Veraflames were the toast of Savannah’s Night Flight Cafe; they were the first local band to play at the club, which specialized in out–of–town performers (including some who went on to great success).

The four musicians are in their 50s and 60s now, and have different interests and careers. But rock ‘n’ roll – and the sheer joy of playing those guitar–heavy hits from the 1960s and ‘70s – was transfused into their blood in the Veraflames era.

The July show was so much fun, they’re playing a reprise this Sunday, Aug. 7, again at Loco’s. The guys call it the “Prom Tour,” because it’s like going back to high school (in a good way).

Strickland, Frank Andrews and Skip Hinely switch off between guitars and bass. The drummer, now as then, is Jesse Jordan.

“There were a lot fewer bands in 1980s Savannah than there are today,” says Strickland. “SCAD was embryonic at the time. So all the musicians kind of knew one another; pretty much everybody at that time was a cover band. I didn’t know any bands in 1980 that were writing their own material.”

They’d started as a “convention band” in Hilton Head, playing 45–minute dinner sets (all instrumental) for visiting dentists, accountants and their wives. Strickland remembers the four players laughing throughout the performances, as Hinely gamely plucked out the melodies to their favorite rock ‘n’ roll hits on his lead guitar while the conventioneers slurped their soup. The money, he says, was good.

However. “We really wanted to play something that was just fun,” explains Andrews. “So Thad and Skip said ‘Why don’t we do all these Rolling Stones and Beatles songs?’”

The Night Flight, he says, “was run kind of like the Sentient Bean. They ran classic movies on Monday nights, and had bands for the rest of the week. So if Eric Johnson was playing there, he would play Tuesday through Saturday.”

Says Strickland: “There really weren’t a whole lot of places to play back then, either. You played private parties and this, that and the other, scraped up whatever kind of gigs you could. The Jaycees and that kind of stuff.”

Andrews, the Night Flight’s sound man, convinced Coy to give his band the Monday night slot. “Of course,” Andrews says, “the goal for us was to get to play on the weekends.”

Mondays heated up. “The only people that were out and about on Monday night were servers – waiters, waitresses, maitre d’s,” Strickland says. “And when they got off work late, they wanted to have some place to go. So that’s what they started doing, and that was our audience back then. Probably 75 percent of them worked in the night life.”

So the Veraflames graduated to the coveted weekend gigs. And thus, the legend began.

First, they needed a name. Andrews loves to tell this part of the story. “There was a band called Dana and the Veraflames, who were some military kids, in the early ‘60s,” he explains. “And Thad and Skip, being the elder statesmen of the band, that was the earliest local band that they could remember that they thought had a cool name. So we decided we’d be the Veraflames.

“It doesn’t mean anything. We just liked it. It makes a real good logo, I think.”

They were seriously hot stuff. “The Night Flight was not a place where people danced,” Andrews recalls. “We were the first people that unintentionally broke that rule.”

In the band’s heyday, they all kept their day jobs, and the Veraflames only played two or three times every month.

“As opposed to most local bands, the Veraflames never had to play every night trying to make a living,” Andrews explains. “So there was a supply and demand aspect. And there are a lot of people who were way better than the Veraflames probably ever were.”

The Veraflames “dragged on,” according to Andrews, into the ‘90s with several incarnations. “It was all a lot of fun,” he says. “But eventually, for a variety of reasons, we all quit doing what we were doing.”

Today, Andrews works at Portman’s Music, where he specializes in sound systems. Strickland lives in Brunswick and runs a company that fabricates airplane parts.

Jordan and Hinely are still Savannah musicians, and they each play with several local bands.

The original quartet has reunited, just for kicks, once or twice over the years. The last time was in 2003.

In June, Andrews recalls, “I called everybody up and said ‘Would you play a few gigs this year if somebody was dumb enough to let us play?’”

Mike O’Connor, who runs Loco’s Grill & Pub, was a friend from the old days and immediately said “yes.”

The Veraflames’ only concession to their ages – and the passage of time – was their insistence on an early start time for the Loco’s shows. For the benefit of their vintage fans, and the musicians themselves, they’ll go on stage at 6 p.m. and wrap it up by 9. The better to be home in bed at a decent hour.