Local artists collaborate at B Historic on Dec. 1 to help the U.S. Virgin Islands

Where: B Historic Hotel, 320 Montgomery St. 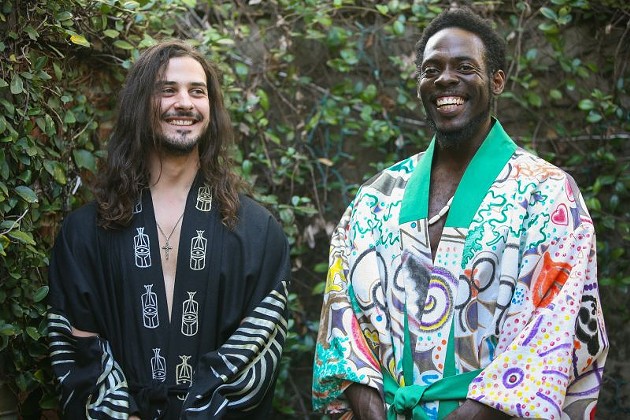 ARTIST and yoga instructor Cindy Male is no stranger to the eye of the storm.

Now based in Savannah, Male spent 32 years living on St. Croix in the U.S. Virgin Islands, where hurricanes often hit before heading towards the mainland or dissolving out at sea.

“I went through Hugo, Marilyn, Backwards Lenny...” she says, ticking off some of the most destructive named storms in the history of the Caribbean. “I’m familiar with the damage they can do on these islands.”

The 2017 hurricane season hit the U.S. hard, seen in the tragic footage of Texas, Florida and Puerto Rico. Less visible has been the damage done by Hurricanes Irma and Maria to homes, schools and other infrastructure decimated on St. Croix, St. John and St. Thomas.

After hearing from friends in the paths of those storms, Male knew she needed to help—and that help would be needed long after hurricane season was over.

“It’s been over two months, and most people still don’t have roofs. The hospitals are gone. The schools can’t reopen because of the mold,” she laments. “It’s still really bad over there.”

To raise consciousness of—and funds for—the ongoing state of emergency, the painter and Reiki practitioner has organized Creative Innerfacing, an afternoon and evening of yoga, music and fashion on Friday, Dec. 1 at B Historic Hotel.

Proceeds from the event directly benefit the St. Croix Community Foundation, which supports education and medical care in the USVI and is helping resettle families impacted by the storm.

Creative Innerfacing kicks off at 4pm with an energizing kundalini yoga session led by Male, followed by a line-up of some of Savannah’s most thoughtful and thought-provoking musical acts:

“These are all people who have good energy,” promises Male, who has coordinated similarly eclectic events in Hilton Head Island and Beaufort. “There is going to be a lot of synergy.”

Photo by Jon Waits
Suzy Hokanson (l.) will showcase her globally-inspired textiles along with kimonos and leggings designed by Male (r.), who is organizing the event.

Tickets are $45, and a special menu will be available for purchase separately, courtesy of B Historic Executive Chef Will Herrington. Partygoers can order nourishing and delicious starters, salads, entrees and desserts from the hotel’s K320 kitchen, including vegetarian dumplings and a dazzling confection known as a Leopold’s Golden Spoon Ice Cream Sunday. (Reservations recommended; 921-5300.)

Fashion takes over mid-point in the evening, when several local independent designers will showcase their lines amid the stellar background projections of Frank Unger. Multi-talented musician, bellydancer, soapmaker and seamstress Nicole Edge will send her sexy frocks and hand-crafted apparel down the runway along with Lara Neece’s flirty and fabulous bicycle skirts, and custom sneaker designer Xavier Hutchins—aka “Zay the Artist”—will display his funked-up kicks.

Unique knit vestments created by fiber artist Suzy Hokanson are also part of the show. Inspired by global traditions and modern aesthetics, Hokanson weaves and crochets remarkable wearable art garments, seen in Savannah at Gallery 209 on River Street and in the Design District at Roots Up Gallery.

“I’ve been designing with color and texture for 45 years, and my work has evolved from traditional patterns and designs to something more artistic and free-flowing,” muses Hokanson, who often spins and dyes her yarn from scratch. “My process now is very improvisational, like painting on a canvas.”

The event organizer herself is contributing several pieces to the fashion walk, including lace waistcoats, silk and linen kimonos, and patterned leggings printed with details of her original art.

For the kimonos, Male has converted indigenous iconography and the colorful, tropical landscapes she painted in St. Croix into digital files that are then projected and handpainted onto the cloth.

Her ZemiZen line of leggings is inspired by her decades-long yoga career—“I wear leggings more than any other article of clothing,” she says—and utilizes the same type of digital files to create patterns that are then transferred onto the fabric and sewed in the Lowcountry by Vapor Apparel of North Charleston.

Repurposing her paintings into something wearable is part of her mission to promote the inner consciousness cultivated by yoga to the outer world.

“Some people appreciate art, but everyone looks at fashion,” she explains. “It seemed like a better way to get across the message.”

In addition to designing more clothes and leading private and small group yoga sessions in her sunny studio near Forsyth Park, Male hopes to continue the healing of her hurricane-ravaged island home through fundraising and mindfulness.

“This is a long term effort. So many people are having to start over,” she says. “They’re going to be rebuilding and healing there for a very long time.”