Feel the love with Savannah Stage Co.'s Romeo and Juliet

IT'S THE greatest love story ever told, and Savannah Stage Company (SCC) wants to make sure all of Savannah can experience it live this Valentine’s weekend.

Wesley Pridgen, a founder of Savannah Stage Company, and Ashley Cook will light up the casual elegance of Ampersand’s third floor, SCC’s mainstage, as Romeo and Juliet.

Yes, Shakespeare’s most famous work is well-suited for the most amorous weekend of them all, but director Lexi Ambrose explains that there’s even more to be gleaned from the first installment of SCC’s 2016 season.

“Obviously, it’s a love-conquers-all story, but it’s also a cautionary tale about violence, holding grudges, and creating enemies where love could exist,” she explains.

“I think that’s a very universal story—I think we’re always battling with that in our lives, trying to find the possibilities for love instead of hate.”

Ambrose has been reminding the actors of those core lessons throughout rehearsals.

If you’re familiar with SCC’s work, you know the local troupe celebrates literary classics every season. For 2016, the founders aimed for a loose theme of “stars being crossed,” says Ambrose. With a desire to follow last year’s excellent production of A Midsummer Night’s Dream with another Shakespeare favorite, Romeo and Juliet was a natural fit.

“We wanted something that was one of the greats,” affirms Ambrose.

The show has been a learning experience for all cast members, as Romeo and Juliet is a very physical play. Sure, it’s about blind romance and destiny, but there’s also lots of dueling and plenty of blood.

“We had to bring on a fight choreographer for the show,” says Ambrose. “We put out an ad, and Catherine Vingelis responded...she is wonderful. The two of us got together and talked, and we just clicked. The way she chooses to tell a story is the same way that we as a company like to tell a story.”

Ambrose stresses that physicality is vital in live performance.

“For me personally, that’s how I get into acting and characterization, through the physicality of a character,” she explains. “That’s how I approach directing as well—it’s really important to me. When I sit down to figure out how to lead the bunch, I always go back to that. It’s about a whole lot more: it’s about relationships and people following their impulses. You have to physically be able to follow your impulses before the words mean anything.”

Even for seasoned actors, opportunities to explore stage combat can be a rarity. Vingelis was a huge asset to the production, shaking the dust off for experienced performers and training newbies.

“Honestly, she was like an assistant director in a lot of ways, because all those moments had to come from her imagination and creativity,” Ambrose says. “It’s been very cool, and there are some acting members who are absolutely brand-new to stage fighting, so there’s a lot of growth going on there.”

SCC is using Katy Brown’s adaptation of Romeo and Juliet, which Ambrose praises for its brevity.

“We always talk about [our productions] having the economy of words, and a lot of our plays come from playwrights who feel the same way,” she says. “Every word means something, and every word should be cherished.

“It’s great, because obviously Shakespeare is so poetic, and Shakespeare can say one thing in four stanzas that is so beautiful and so colorful, and this adaptation takes the true meaning of every moment and just condenses it in order to, I think, focus on the relationships and what the characters are trying to get from one another and getting to the point a little bit quicker.” 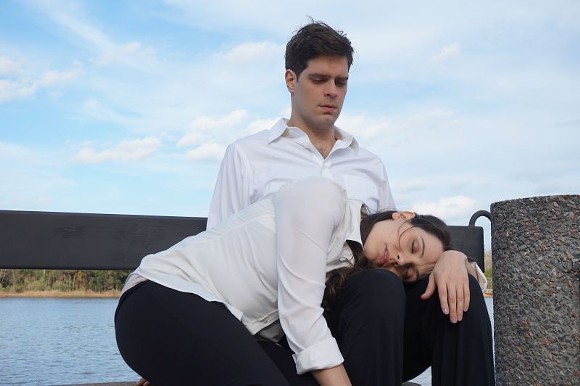 As SCC tours every show, bringing the joy of theatre to local schools, libraries, and nursing homes, that brevity is paramount.

“It’s a very modern way of approaching Shakespeare,” says Ambrose. “Also, our shows tend to be fluid enough so there’s not a moment where anyone feels they need to take a break.”

“That’s how we work as a company,” Ambrose says. “Our sets are very minimal so we can take them on tour, and everything is based on the actors. We don’t want to hide behind any conventions, or too much fanfare, or costume changes, because we feel like all that is secondary, because the acting is so much more important. There may be an added piece or garment here and there to differentiate a character, but in the end of the day, it’s the actors’ responsibility to do that all on their own.”

Though the costuming may be simple, Ambrose has established a black-and-white theme to the wardrobe, inspired by an actress’s rehearsal outfit.

“She was wearing these cool biker leggings and lace-up combat boots,” Ambrose remembers with a grin. “I was like, ‘That’s hot! Let’s wear that! Everybody gets to wear that!’”

Now, the entire cast is clad in black, with the exception of Romeo and Juliet.

“So when the blood starts happening, guess who gets to take the hit?” she says with a mischievous smile.

As with all SCC shows, admission to Romeo and Juliet is Pay-What-You-Can, and they truly mean it.

“It means a lot to us that money should not get in the way of people seeing good theatre and being able to hear the human story,” Ambrose stresses. “I think that, sometimes, people are a little skittish about it, but it really means that if you come and all you have is a nickel, we’ll take it. We’ll give you a seat. We’re really serious about it, and we really want it because that’s how we exist as a company: we do all this work, and at the end of the day, none of it will matter unless people will come experience it with us. That’s all we care about.”