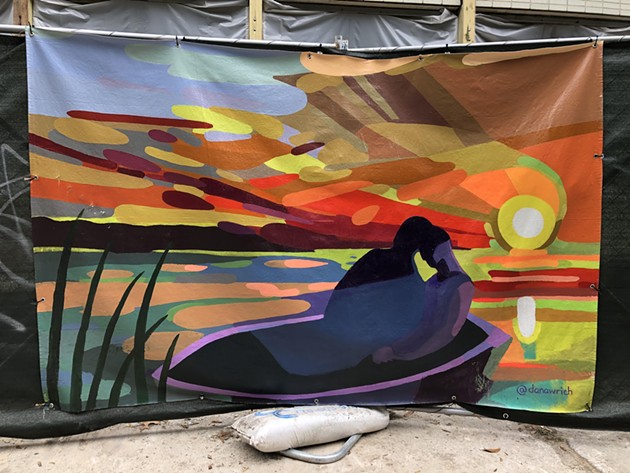 Nick Robertson/Connect Savannah
A Fence Art Project mural by Dana Richardson hangs in front of the construction site at the intersection of Drayton Street and E. Bolton Street.
When a building is under construction or renovation, this usually means that neighborhood residents are forced to look at drab fencing surrounding the site for months on end. However, when Savannah community booster Clinton Edminster recently looked at construction-site fences around his beloved Starland District, he saw something else entirely – an opportunity to simultaneously beautify the neighborhood and showcase local artists. Thus was born The Fence Art Project, an initiative to drape construction barriers with hand-painted canvas murals created by a variety of Savannah-area visionaries, including local children. Now 11 oversized paintings grace multiple building sites around the district in a project organized by Edminster’s Starlandia Foundation, which also produced the popular Starland Mural Project in 2019.
click to enlarge 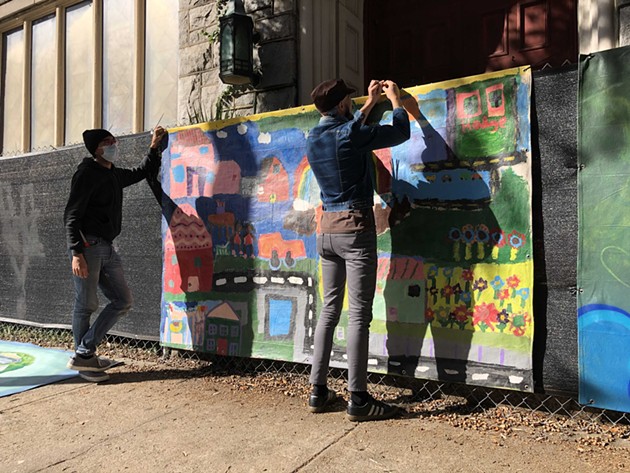 Nick Robertson/Connect Savannah
Clinton Edminster (left) and José Ray hang Fence Art Project murals at Starland Village.
“I was definitely inspired by the amount of construction going on in the neighborhood, and wanted to draw attention to it in a positive way,” Edminster said while hanging up murals in Starland Village on Jan. 6. “As the world gets a little darker this winter, we hope to bring some color and hope to the neighborhood.” The Fence Art Project was conceived as a pandemic-safe way to create something of an alfresco gallery show for local artists Amiri Farris, John Grund, Xavier Hutchins, Nae’Keisha Jones, Brian MacGregor, Tyriq Maxwell, José Ray, Dana Richardson, and Jon Witzky, all of whom produced the murals separately at their individual studios on six-by-nine-foot canvases. Once completed, Edminister collected the murals and weatherproofed them with clear sealant before installing them on construction fences surrounding The Matadora apartments being built at 1512 Bull Street, the Starland Village at the corner of Bull and 38th Street, and at the new Savannah Economic Development Authority offices under development at the intersection of Drayton Street and E. Bolton Street.
click to enlarge Nick Robertson/Connect Savannah
A Fence Art Project mural by Brian MacGregor hangs in front of a Starland Village construction site.
After hanging the murals in early January, Edminster said that feedback from area residents on The Fence Art Project has been overwhelmingly supportive. “It’s been really very positive, and how could it not? We’re adding a lot of color and introducing the community to a lot of artists,” Edminster said, adding that this was the first time that some of the contributors were commissioned to paint a mural. “Giving them the opportunity to do that can make them more confident in what they’re doing.” One of the first-time mural painters was Nae’Keisha Jones, who created a playful image of three kids enjoying their imagination to the fullest by reigning over their own fanciful storyland based on features of the Savannah community, building on her previous work of writing and illustrating children’s books.
click to enlarge 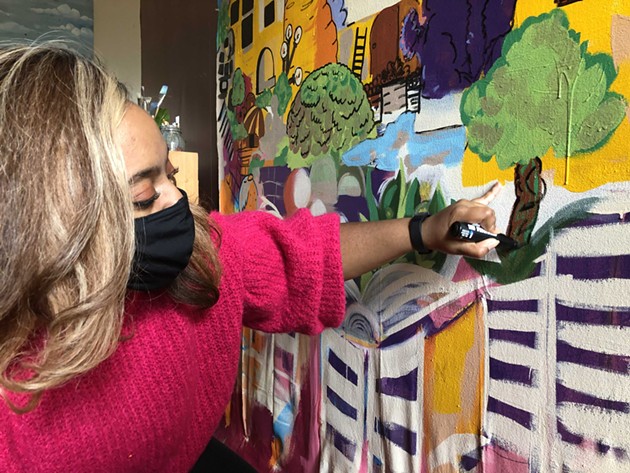 Nick Robertson/Connect Savannah
Nae’Keisha Jones works on her Fence Art Project mural in her home studio.
“I wanted them to be in a place where they could build and be part of a community,” Jones said of her mural’s youthful stars, adding that it was intriguing for her to paint an artwork without knowing specifically where it would be displayed. “It’ll be a good piece regardless of the location. Even if it was in a random alley or something, it’ll bring light.” Children were also direct contributors to The Fence Art Project, as two murals were completed as collaborative efforts by kids participating in Loop It Up Savannah, a nonprofit community program providing art classes and activities for local youths and adults. Investment for The Fence Art Project was provided by the City of Savannah’s Weave-A-Dream program, while sponsors included the Foram Group, The Matadora developed by My Nice Apartments, and the Savannah Economic Development Authority, as well as Starland Yard and Edminster’s Starlandia Supply store.
click to enlarge 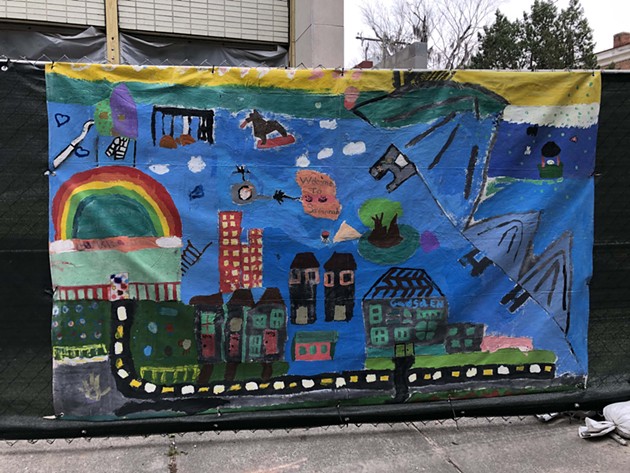 Nick Robertson/Connect Savannah
A Fence Art Project mural collaboratively painted by children in the Loop It Up Savannah program.
The murals are expected to remain on display at their various Starland locations until at least March, and afterwards Edminster would like to offer them for permanent display on blank walls of Savannah-area public-service institutions that could use a little brightening up. He is also interested in organizing another round of The Fence Art Project for future construction sites that will inevitably pop up again soon in Savannah. “I’d like to keep this going with different artists on different construction projects,” Edminister said.