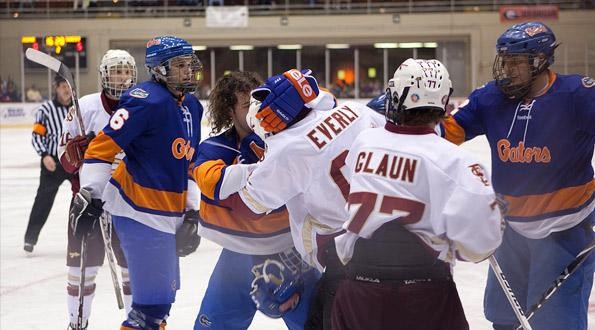 But each January for the past 15 years, this laidback deep South city has hosted an extremely popular hockey tournament. Go figure.

“After 15 years, the event has become a mainstay on the Savannah calendar,” echoes Visit Savannah President Joe Marinelli.

The secret of the Hockey Classic’s success comes down, oddly enough, to college football, a familiar factor in the success of a lot of things in the South.

Specifically, the teams in the Hockey Classic mirror familiar rivalries on the gridiron.

“The tournament has featured classic rivalries from the beginning, with Southern teams that people are very loyal to. These are some pretty heated rivalries,” says Wilder.

“Hockey fans, college fans, the social scene — it all blends together to make the perfect, affordable, family friendly event.  It’s amazing to see the people who come out and where they come from. ”

Marinelli says that although the event attracts many locals, “we see larger and larger followings from the schools coming in every year. That helps fill lots of hotel rooms and restaurant seats in what’s normally a slower tourism time of the year.”

The core battle, of course, is always the “Good Old Fashioned Hate” rivalry between the University of Georgia and Georgia Tech. However, unlike on the gridiron, the Yellow Jackets have a clear advantage on the ice, winning the Hockey Classic’s Thrasher Cup championship seven out of the 14 times the tournament’s been played.

Another key rivalry is between the Florida Gators and the Florida State Seminoles. “The first year, Tennessee was in the tournament instead of FSU. But then the Seminoles took their place the second year,” Wilder says.

But the teams which combine for the most volatile rivalry in the Classic are the two newest additions.

“Last year we added the University of South Carolina and The Citadel. The SC/Citadel game gets pretty rough,” says Wilder. “We actually had a goalie jump and tackle a guy.”

Wilder says the popularity of the Classic — which was once marketed as “Rumble in the Rink” — has brought phone calls from college teams asking to be in it. So far, the tournament’s stayed pretty selective.

“For example, we got a call from the University of Miami, which conceivably could work with the whole ACC rivalry angle,” says Wilder.

However, Wilder is quick to point out that the Hockey Classic can’t actually use college football conference names, like the ACC and SEC, to formally promote the event.

“We have to be careful not to use the football conference names,” says Wilder. “Actually, these teams have formed their own hockey conference, the Southeastern Collegiate Hockey Conference, the SECHC.”

The participating hockey squads may have their own conference, but they aren’t considered official sports by their respective universities — they’re technically still club sports.

Wilder says because these players have no aspirations to play professional hockey, the Savannah Tire Hockey Classic (also sponsored by Memorial Health for many years) is often the pinnacle of their hockey careers.

“They go from playing at midnight for 200 people to playing for 5,000 in the Savannah Civic Center. These are engineering students and accounting majors — they’re all going to eventually get a regular job and be normal,” Wilder laughs.

While the level of play isn’t NHL–quality, it’s not too shabby either.

“It’s obviously not high level, but these guys have all played growing up. They’re good players,  they’re just not hitting the puck like an NHL player. Of course you wouldn’t know that from being there watching,” Wilder says.

Because the tournament comes at the end of the usual college hockey season, the players often bring family and friends to Savannah to mark the occasion.

The teams have also formed bonds with local charities over the years. For example, the Bulldogs visit the Memorial Health children’s unit, while the Seminoles go to the YMCA.

The origin of the Hockey Classic goes back to John DeLoach’s tenure as director of the Greater Savannah Sports Council.

“A couple of committee members said, ‘Let’s try and do a hockey event.’ I think only one had ever been to a hockey game,” laughs Wilder.

Wilder says another important factor of the Classic’s success is its powerful networking opportunities, chiefly in the big VIP area.

“It’s become a huge client entertainment type thing. Sponsors love it. We don’t have suites to sell like at a pro sports game, but we do have one gigantic party suite where all the sponsors go. It’s a really high–demand ticket.”

Of course, many promotions will mark the 15th anniversary, including a “money vault” upstairs where you grab money out of the air, and the “Slapshot for Cash” with a $15,000 prize.