Parole board meets 'face-to-face' with victims of violent crime 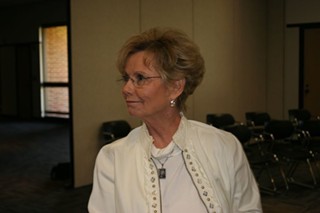 Marion Allen drove from Alabama for Victims Visitors' Day, hosted by the Georgia Board of Parole. The Sept. 19 event was the first held in Savannah since 2006.

In 2001, schoolteacher Robert "Bart" Allen was strangled to death in his Georgetown apartment. The man who killed him, John Blaine Williams, was sentenced to 20 years in prison for voluntary manslaughter. Marion Allen, Bart's mother, drove all the way from Opelika, Alabama last week to make sure Williams serves every second of that time.

Wearing a tiny black-and-white portrait of her deceased son around her neck, Allen waited patiently for her appointment with members of the Georgia Board of Pardons and Parole last Wednesday morning at the Coastal Georgia Center. The softspoken Alabaman was one of several hundred people who traveled from near and far for Victims Visitors' Day, a day-long program that gives victims of violent crime and their families an opportunity to discuss the parole status of the offenders that have irrevocably affected their lives.

"He was our only child," said Allen, her eyes tearing up. "We just want to make sure justice is served."

As overcrowded prisons, overflowing court dockets and other shortcomings continue to muddle the criminal justice system, the care and service of crime victims might easily be overlooked. But Allen's lasting grief and that of the other victims present were not lost on Chatham County District Attorney Meg Heap, who spoke briefly at the opening ceremony along with Mayor Edna Jackson.

"As prosecutors and law enforcement, we move on to the next case, but you don't," said DA Heap. "We can't make you whole again, but we can give you what you need so that you know you are not forgotten."

Coordinated by the Office of Victims' Services that serves both the Georgia Dept. of Corrections and the State Board of Paroles and Pardons, Victims Visitors' Days help bring closure for those living with the effects of violent crime. Attendees also receive counseling about other victim services available through the state, including the Victim Offender Program that allows people to confront the perpetrators in a controlled environment.

This was just the second event hosted in Savannah since the program's inception in 2006, and over 140 appointments — some with entire families in attendance — were on the schedule, plus some expected walk-ins. Those arriving were greeted by a fleet of friendly representatives from the Office of Victims' Services, dressed in matching yellow sweater sets and gently coaxing people to their designated meeting places.

"We will meet with every single person and stay until they've had their say," promised Board Chairman Albert Murray.

All decisions concerning the parole of prisoners in the state of Georgia are decided upon by Chairman Murray and the rest of the Atlanta-based Parole Board, and hearing from the victims helps them rule whether an inmate deserves an early release from prison. (Inmates do not meet with the board.) All five members of the board and approximately 30 staff members were present Wednesday.

"We get the impact statements, the protest letters and the other documents, but there is no substitute for the face-to-face meetings we'll have today," said Murray, adding that he and the board consider each case individually.

"We know that these victims' lives will never be the same due to the severe nature of the crimes, but we hope there is some healing in the process."

Lateria Hamilton knows speaking to the Parole Board won't heal the multiple injuries she survived when Wallace Orr broke into her home on East Henry Street in 2006 and shot her six times, but she was eager to keep her appointment for other reasons.

"He's up for parole this year, and I want him to do all his time," declared Hamilton, who brought along her mother, Joanne, for support.

Hamilton, who still has a bullet in her torso — as well as a pin in her hip and a steel rod in her thigh — as a result of the assault, also planned to ask the board to ban Orr from the county after he's released in 2015.

"I still fear for my life from that man," she said. "I don't want him anywhere near here."

Victims Visitors' Days are in high demand around Georgia, and the next Savannah event may not come around again for a few years.

As a local victims advocate through the DA's office for the last 28 years, Rogers was pleased with efforts of the Parole Board and the day's turnout.

"It's a way for victims to continue to have a voice," she said, noting that some of the day's attendees were addressing cases from as long ago as the 1980s and came from as far away as Michigan.

For those who work in this corner of the criminal justice system, the victims are the most important aspect of a crime, much deserving of time and resources that are mostly reserved for inmates and administration.

Coincidentally, it was Rogers who helped Marion Allen navigate the judicial process during the high-profile trial of her son's killer a dozen years ago.

As Allen was escorted to see the board by one of the kindly women in yellow, Rogers gave her a smile and a little wave.

"They're not victims to me, they're victors," nodded Rogers.

"They're just so brave."

Editor's Note: Thoughts on a Fourth of July from hell