La Dolce Vita, The Joker and more round out the week’s offerings

“An American in Paris”

BEFORE we dive into the bevy of alternative film options available in and around Savannah over the next seven days, I wanted to thank everyone who came out this past week to CinemaSavannah's special event screening of Bong Joon-Ho's critically adored dark comedy "Parasite" at the Savannah Cultural Arts Center.

A prior commitment kept me from attending, but I am told it was a capacity crowd, which is no small feat for a room that size.

Every few years or so, Tomasz Warchol (who curates CinemaSavannah’s ongoing series of recently-released foreign and indie motion pictures) winds up presenting an extremely buzzworthy feature at precisely the right time to maximize local interest, and this seems to have been one of those fortuitous occasions.

“Parasite” was a slightly odd choice for his organization, as it had already played to a packed house during a pre-release sneak preview at the 2019 SCAD Savannah Film Fest, and played for either one or two weeks at one of our local multiplexes. However, many locals could not get tickets to the SSFF show, and likely never noticed its brief theatrical swing through town.

Such a sizable turnout for an example of edgy, foreign fare such as “Parasite” demonstrates an increasing awareness of –and interest in– such selections in our market.

That’s one reason I’m both delighted and excited to announce that Tomasz’s organization and my own (The Psychotronic Film Society of Savannah) will soon join forces to cooperatively present special, one-show-only screenings at the Cultural Arts Center of other bold and provocative movies we feel will appeal to loyal followers of both organizations.

Look for details of that new, collaborative, bi-monthly series to be announced shortly! 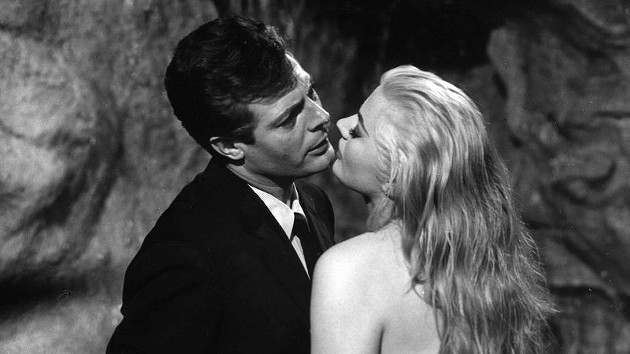 La Dolce Vita, which screens Jan. 17 at the Trustees Theater.

Moving on to this next week’s worth of noteworthy shows, on Jan. 15 at the Sentient Bean Coffeehouse, the Psychotronic Film Society celebrates what would have been the 90th birthday of the late, great Australian leading man Rod Taylor (“The Birds,” “Mercenaries,” “Giant,” “The Time Machine”), with an incredibly rare public viewing of one of his coolest, yet least-known starring roles. 1070’s “Darker Than Amber” was directed by Robert Clouse (“Enter The Dragon”), and this Florida-set neo-noir detective flick casts Taylor as “Travis McGee,” the protagonist introduced in a series of gritty, pulp fiction novels written by John D. MacDonald from the 1960s through the 1980s (MacDonald also wrote the original novel that the classic, Savannah-shot film “Cape Fear” is based on).

Legal issues have prevented it from being officially released on DVD, Blu-Ray or digital streaming anywhere in the world, which makes this presentation of the uncut, theatrical version all the more tantalizing for rare movie buffs or fans of the Travis McGee detective novels. 8 p.m. showtime, with discounts on craft beer and organic wine during the movie.

The following Wednesday, Jan. 22, the PFS’ weekly series continues with the little-known 1994 Danish-made horror flick “Nightwatch.” This unsettling slice of atmospheric murder mystery was ranked as one of the best Danish films ever made, and three years after its release, was actually remade here in the USA as an English-language version starring Ewan MacGregor and boasting a revamped screenplay by none other than Steve Soderberg. However, the PFS will screen the original 1994 film, in spoken Danish, with English subtitles. 8 p.m. showtime.

Moving out to the Southside of town, on Jan. 15, the AMC Savannah 11 multiplex behind Savannah Mall, presents a high-definition presentation of the Metropolitan Opera’s brand-new production of Alban Berg’s controversial 1922 opera “Wozzeck.” This somber, atonal portrait of rural Germany in the early 1900s was rightfully seen as a rather avant-garde piece when it first debuted, and visual artist William Kentridge’s new take on the opera recasts it as a nightmarish apocalyptic vision that’s relevant to today’s political and spiritual climate. In spoken German with English subtitles, the performance runs two hours, and begins at 6:30 p.m.

The grand finale of the film consists of an almost 20-minute ballet sequence set to George Gershwin’s eponymous 1928 orchestral piece (he and his lyricist brother Ira also composed most of the additional score for the film). Special bonus content for this high-definition event includes onscreen commentary by some of TCM’s knowledgeable hosts. Showtimes are 1 p.m. and 4 p.m. on Jan. 19, and 7 p.m. on Jan. 22.

Heading out to Tybee Island, the historic Tybee Post Theater offers the area’s exclusive big-screen engagement of “Marriage Story,” the new Netflix original motion picture from beloved writer-director Noah Baumbach (“The Squid and the Whale,” “Margot at the Wedding,” “Kicking and Screaming”), which stars Adam Driver and Scarlett Johansson as a feuding couple grappling with a long-distance divorce (and its impact on their young child). Nominated for six Oscars at the upcoming ceremony (including Best Picture), it’s said to be rooted in and somewhat based upon the details Baumbach’s own life, as are many of his films.

Unlike most major dramas of this sort which feature a fairly stellar cast (including Alan Alda, Laura Dern, Ray Liotta and “The” Rich Fulcher in supporting roles), “Marriage Story” has never played in more than 130 theaters around the country at any given time – compared to thousands for plenty of modern-day releases. That’s because of Netflix’s unusual release strategies, and the fact that most major corporate theater chains are declining to program that company’s movies, as they see the fact that Netflix releases them almost instantly to their streaming subscribers (while the films are still in cinemas) as inherently undercutting the theater owners’ revenue streams.

Which means that only small, independently-run venues like the Tybee Post can bring them to the public. So, even if you already stream Netflix and have access to this picture at home, you might want to consider coming out to support the Post, and be one of the very few folks around the country who have the opportunity to see this Best Picture nominee in a real theatrical environment. Showtimes at 3 p.m. and 7 p.m. on Jan. 15 and 16.

The day after that engagement ends, the Post opens another limited run of a critically acclaimed (yet rather divisive) dramatic superhero flick that’s also nominated for several Academy Awards including Best Picture: director Todd Phillips’ “Joker,” starring Joaquin Phoenix as Batman’s arch-nemesis The Joker. Essentially an alternative origin story for the demented, sadistically cruel supervillain, the movie was openly based on Martin Scorsese’s 1970s cult classic anti-hero character studies “Taxi Driver” and “The King of Comedy,” both of which starred Robert De Niro as their title characters. De Niro also appears in a supporting role in “Joker,” adding a sly-yet-direct through-line from those films to this tale of yet another marginalized outsider who fancies himself hilarious and likeable, yet whose inability to interact with greater society leads to them committing heinous crimes of victimization and destruction. Showtimes at 7 p.m. on Jan. 17 through 19, plus a 3 p.m. matinee on Jan. 19.

A short drive away from Savannah in the nearby city of Springfield, Ga., their restored, historic Mars Theatre opens a lengthy engagement of the family-friendly fantasy-adventure “Dolittle,” the latest cinematic reboot of the story of Doctor Dolittle, an eccentric physician and veterinarian in Victorian-era England. This time around, the good doctor is portrayed by none other than Robert Downey, Jr., who is surrounded by fellow humans Antonio Banderas and Michael Sheen, who are all in turn surrounded by a menagerie of CGI animated animals, who talk and cavort and interact and assist their human compatriots, all the while being voiced by the likes of Emma Thompson, Octavia Spencer, Ralph Fiennes and Marion Cotillard.

Heading back downtown, on Jan. 17 at Trustees Theater, the SCAD Cinema Circle, which presents examples of extremely respected and/or influential feature films, offers a one-time-only screening of Federico Fellini’s landmark 1960 dramedy “La Dolce Vita” aka “The Good Life.” Divided roughly into seven different vignettes which appear to represent seven successive days and nights in the life of a self-indulgent tabloid journalist in Rome, Italy (played by the sublimely wonderful Marcello Mastroianni), its popularity brought a street-level view of frenetic Italian existence to the rest of the world, and spawned numerous cinematic knock-offs and homages in the decades which followed.

A worldwide smash at the time of its initial release, this gem took home the coveted Palme d’Or at the 1960 Cannes Film Festival, as well as the Academy Award for Best Costumes. In recognition of the movie’s tremendous worldwide influence on fashion (as well as the influence of Italian cinema in general on such things), this screening will be hosted by SCAD Fashion Professor Stephen Geller, who, prior to his teaching career in Savannah spent more than a decade in the Italian film industry and worked with Fellini himself. Professor Geller will introduce the film, and moderate an audience Q&A session afterwards on the importance of Italian cinema on the fashion world. 7 p.m. showtime.

And finally, Foxy Loxy Café near the Starland District continues its monthly outdoor “movie night” on Jan. 17. Held in the restaurant’s back courtyard, these events take place on the third Friday of each month, weather permitting, and focus on popular mainstream titles, with exact selections determined by online vote. Interested readers should call the restaurant that day updated info.

No admission is charged, but you must purchase food and/or drinks to stay and watch. Be aware many people in the courtyard are there to socialize. So, if you prefer a quiet and respectful environment when viewing a film, the inherent chatter and ambient noise of this setting may not be to your liking. Showtime is 8 p.m.