I’D originally intended to follow-up last week’s dive into land valuation practices and also take a closer look at improvement (structures) valuations, but that will have to wait.

The Chatham County Board of Assessors (BOA) did take note of my column, and has promised to address the issues raised there. In good faith, I have in turn decided to hold off and give them a chance to do so.

(But that appeal deadline still stands, so as Jack Nicholson would say, “Act accordingly.”)

Instead, I will address a related issue – despite our rising property taxes, why do we seem to not have enough money coming in?

Why is the city having to take what some see as extreme measures, such as the controversial Fire Fee, to balance the budget?

Several weeks ago, Alderman Bill Durrence held a town hall meeting in which he outlined the budgetary challenges that the City of Savannah is facing. The basic message was that revenues are not keeping up with expenses.

One of the acute reasons for this was a “new cost” that caught my attention, and I think deserves to be pointed out, as it helps to illustrate why we are in a more chronic situation of imbalance between revenue and expense.

It was at the bottom of slide 17 – “Opening of new fire stations”.

But most importantly, where will these new stations be? Take a look at the map.

Aside from a new station shown for Hutchison Island, all of the new stations are west of I-516 and Veterans Parkway.

You might be asking yourself – is that even Savannah? What the hell is out there?

Sprawl is out there. Sprawl that has been annexed. Sprawl that must be provided infrastructure and services and then maintained.

It’s because sprawl does not pay for itself, yet we keep expanding it.

Home-buyers out there get more bang for the buck, and for that exact reason the city gets very little back in property tax revenue on a per acre basis.

I picked a random house in the god-awful cookie-cutter Highlands subdivision. That’s the area at the top of the map, beyond Pooler, west of I-95, that you thought was South Carolina.

But remember, many, probably most, of these far-flung parcels also have a homestead exemption. They won’t even be paying a full property tax bill, so the value to the city in revenue will be even less.

Wow, you say, that must be a hotel or an office building or something, right?

Nope. That is Gallery Espresso.

To simplify, look at this as growing two kinds of crops. The dense, walkable downtown crop returns almost 20 times more per acre than the suburban sprawl crop, which is also more troublesome to plant and maintain. If you are having money trouble, what should you plant more of?

The answer should be obvious.

Sprawl requires a lot of new infrastructure and perpetual maintenance costs, and has a shitty return on investment. Yet we keep building it, while strangling the growth of downtown.

This problem is not unique to Savannah.

Charles “Chuck” Marohn of Strong Towns and Joe Minicozzi of Urban 3 do a great one-two presentation on this, and have done so across the country to struggling cities, including Savannah.

You can find the video of their Savannah presentation at: http://sdra.net/planning-initiatives/the-savannah-urbanism-speaker-series/dollars-and-sense/

But if you honestly don’t have the time or the attention span, Kevin Klinkenberg, director of the Savannah Development and Renewal Authority (SDRA) summed it up succinctly on a recent Strong Towns podcast that was recorded during CNU 26:

“We have about 2 square miles here (in Savannah) that generate about a third of the city’s property tax revenue, and a majority of the lodging and sales tax. We have effectively over 100 square miles (of city) that doesn’t produce enough revenue to support them(selves).”

Boom. There’s your chronic budget imbalance - too much low density “city” that doesn’t produce enough revenue to support the infrastructure, services, and maintenance that it demands.

People hate it, of course. The mayor has said that it will be reduced, but that means services somewhere else will have to be cut in order to balance out.

That’s the choice with a budget imbalance – you have to either raise more revenues, or cut services.

There’s a third option, but it’s not a quick fix. As Joe Minicozzi points out in his presentation, the “more taxes” or “less services” conundrum will be chronic as long as we insist on “the current pattern of development.”

So, let’s re-examine our current exurban growth paradigm. As I’ve said in a previous column, let’s instead grow the real city, the downtown and adjacent neighborhoods, that exist within the much larger “city” that isn’t paying for itself.

And when the Fire Fee comes back, let’s give it a new name that will direct citizens’ attention and anger to the real problem.

Let’s call it the Sprawl Tax. 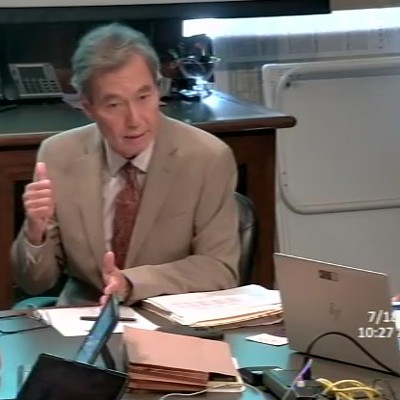 Dec 19, 2018
More »
More An Urbanist View
All News & Opinion
Comments (1)
Add a comment
Subscribe to this thread:
By Email