TWO YEARS after opening Savannah’s LGBT Center in Midtown, the people behind it have a new and loftier goal: unifying Savannah’s small and thinly-stretched all-volunteer LGBT organizations into one much larger organization to serve the community better.

At a remarkable Town Hall style meeting, held on September 12 at Asbury United Methodist Church, leaders of the merging institutions presented their plans to about 50 people, many of whom were old hands in LGBT activism over the past 30 years.

“This is an exciting opportunity to work together in a way we’ve never before,” says Dusty Church of Savannah Pride, one of the merging institutions.

“What we’re doing isn’t enough and by uniting rather than siloing our efforts, we can accomplish more.” 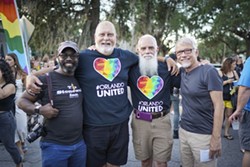 The meeting was remarkable for its honesty. For as much as the world sees the LGBT community as one, and as much as we’d like to think we’re one, we’re just as siloed as the rest. And we disagree. Especially about money.

“I was asking one donor for money and he said, ‘I thought I already wrote a you guys a check,’” says Chris Apple of First City Network, another merging institution.

“We have donors who are confused and frustrated and our fundraising model isn’t working.”

Right now, there are at least seven different groups in Savannah that want your money if you support LGBT causes.

Four of them are part of the merger: First City Network, the LGBT Center (which actually is a part of FCN), Savannah Pride and Jeffrey’s Place.

Each of the four is separate but obviously overlapping. They believe uniting will make them stronger.

“The reason we’re coming together isn’t about money,” says Lisa Allen, a former FCN board member. “It’s about serving the community.”

Growing together, they aim to hire a professional staffer and raise revenue in the $400k+ range. Right now, the largest partner, Savannah Pride, has revenues in excess of $200k.

“We have people who are hurting and we can’t serve them now,” says Church.

Perhaps the most vulnerable of those include LGBT youth, who attend weekly Jeffrey’s Place meetings at the LGBT Center. Jeffrey’s Place is the smallest of the merging parties and has been run for years by Jenn Fuqua.

By merging with larger partners, Fuqua hopes to expand days and reach more young people. Everyone involved has ideas for expanding service.

And in a sign of honesty, a few people at the Town Hall meeting expressly said that they would not seek the role of paid staffer. Savannah is known for hiring totally unqualified people just because they’re friends with everyone.

If I sound snarky, it’s because I served on the FCN board for four years in the early 2000’s and donated lots of time and money to help start Stand Out Youth, precursor to Jeffrey’s Place, and Savannah Pride. Lots of others did, too.

All of these organizations started under FCN and spun off because of bad behavior of the activist kind.

Activists can be pugilists, like I was back then. You kind of have to be. But I eventually I stopped volunteering and donating because of it.

“We’re building a new vision for how we can serve,” says Church. “And we want you to join us.” Heard and appreciated.

“We all get along,” Apple says. This unity and vision just might prompt me to re-engage and prompt others to join in, too.

If you want to learn more, there’s a Pride festival – and a first-ever Pride parade – coming up in late October, and many other ways to help. The new organization will be called First City Pride Center. See them at 1515 Bull Street.

Rachael Sage reckons with bravery in the face of mortality