"Suzanne Jackson: Five Decades" opens at the Jepson Center on June 28 and will remain on view through October 13.

FROM SET DESIGN to painting to dance, Suzanne Jackson has pretty much done it all, and then some.

All of the work will be on display at “Suzanne Jackson: Five Decades,” the first full-career retrospective for the prolific artist.

Jackson’s artistic career began in California in the 1960s, but she was encouraged to be artistic from a young age.

“My father had this look that he could be from any country, so he could get away with a lot because people didn’t know what nationality he was,” says Jackson. “He just did things. He didn’t say anything, he just did things, so I think I gained that from my parents. And if you’re really naïve, you don’t know any better.” 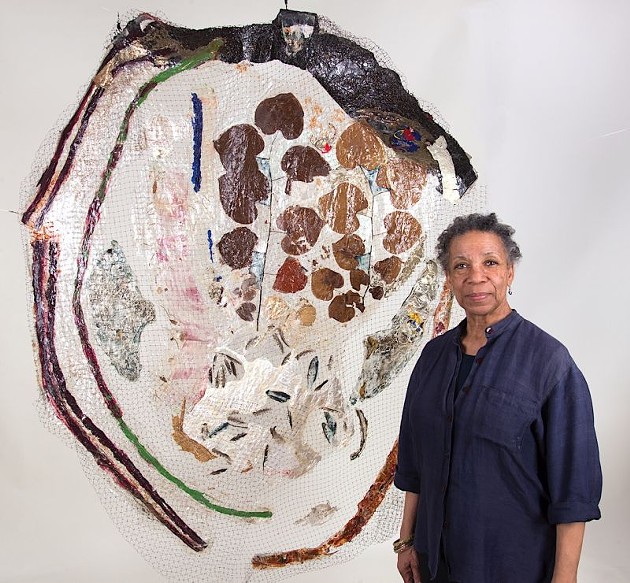 In her paintings, Jackson has always worked big—so big that she took walls out of her Starland home to make room.

“The pieces coming from the early 70s, I think Rachel [Reese, curator] was surprised at the scale,” says Jackson. “They’re 12 feet long, and I have a triptych one collector purchases that was 21 feet long by 11 feet high. I had a five thousand square foot studio in Los Angeles.”

The pieces included in the retrospective are absolutely massive. In the back gallery, the five paintings are suspended from the ceiling, almost like an installation. The paintings are noteworthy in that they’re made entirely of paint themselves, skipping the canvas or paper to create a new way of thinking about paint.

Jackson is fascinated by the creativity she sees flowing through generations.

“One of the things that’s been interesting in the past few years is that a number of younger artists, because they know what the older artists have been doing, I think they’re unconsciously appropriating some things and some images,” says Jackson. “I believe in observation and working from observation, and it seems like a lot of young artists now are cutting and pasting. I come from a generation of people who had to use our imagination.” 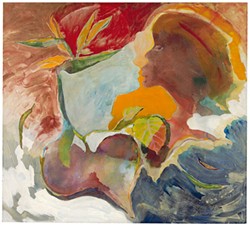 Jackson can appreciate the difference between her generation and those after her.

“I don’t know whether it’s harder now in a way for young people to just do things, because everyone thinks you’ve got to have a degree,” says Jackson. “Now, you all have the responsibility, your generation. You’re the next ones after the students I taught.”

Jackson has been in Savannah since 1996, having taught at SCAD for thirteen years, and knows the young artists have the chance to change the art scene, much like in Los Angeles.

“To me, it’s what’s happening here in Savannah,” says Jackson. “That’s the reason this is my fifteenth studio. Artists will restore and fix a place, and then the landlords raise the rent.”

Jackson has seen firsthand the cyclical nature of the art scene. Her first studio in Los Angeles was a storefront for $40 a month. Now, that space is $2,200 a month—a cheap rent in L.A.

The answer to that problem has a simple solution, Jackson thinks.

“The tourism coming here should be about the creative aspects, not the historic. Those two things can be joined together,” says Jackson. “I think the spirit is going to change. It’s all about young people now. When I stopped teaching, it was because there was a whole generation coming in that was just being placed. They had no clue about what they wanted to do, and I’ve always used the word passion. You really have to have a passion for what you want. Even if you don’t know how you’re going to do it exactly, by the time you get to your major, you have a passion for that. We have a whole population here of people who have stayed in Savannah and that’s our large creative community that’s made us number one in the country.”

Like the teacher she is, Jackson sees “Five Decades” as a way to help local artists.

“I feel that this exhibition and retrospective is going to be helpful for a lot of artists in town,” shares Jackson. “People here in Savannah are going to be very surprised because there’s information and things that no one knows about me.”

In creating the retrospective, Reese felt it was important to include ephemera from Jackson’s life to reinforce her multifaceted career.

“I’m really interested in her archive and her materials, because there was such a wealth of material that was here—images, documents, things that were never seen or made available,” explains Reese. “It’s a full career look at her output, but her output is not just visual art, so I felt like the show was incomplete if we just showed pieces of visual art. She was a dancer, set designer, costume designer, poet, writer—this is all part of who she is as an artist and it’s important to show all of that. It’s not fair just to say Suzanne was a painter. I think she identifies most as a painter, but she is an artist.”