Float some, jet some 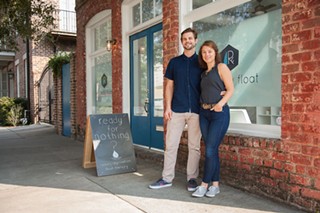 I HAVE a dear friend, a real productive person, who swears on self-care as the secret to her success.

She might appear to be working and volunteering and organizing 24/7, but I happen to know that she spends several hours a week relaxing in her lovely backyard, talking to her chickens.

Clucking with one’s beloveds is a fine way to mitigate the constant barrage of tasks to complete and things to be outraged about, as are getting enough sleep, eating nourishing meals and making sure we move ourselves around by our own momentum at least once a day.

The current state of things has got us rattled if we’re any kind of awake, and most of us are trapped in a frantic loop of refreshing our devices all day long and leaving comments and checking back to see who commented on our comments and hey look a Cyber Monday sale on headlamp beanies! Even when we command ourselves to relax, only to startle back to attention at every text chime, clutching our phones like Nosferatu with a handful of some waif’s hair.

The more we engage, the more quality downtime we need. If we don’t check out and take care of ourselves, we become sad, diminished shells or drop dead of a heart attack or simply go apeshit on the poor cashier at the coffeeshop who didn’t mean to put regular milk instead of soy in our chai latte but good god young man quit fiddling with that eyebrow ring and pay attention before you get your face caught on the espresso machine!

Sometimes self-care means doing a little extra for ourselves, like buying the fancy soap or scheduling a pedicure. Sometimes it takes something more radical. In a world where the world literally follows us to bed, sitting alone in the dark might be the ultimate indulgence.

Enterprising millennials Tyler Spofford and Lizzy Spalding opened up their blackout spot on Montgomery Street last month, offering a lovely little oasis where nothing is the new everything. Two finely-appointed rooms each include a private shower and a 8’x4’ cabin that holds 300 gallons of body-temperature water combined with1800 pounds of Epsom salt, a womb-like environment that is blessedly devoid of sights, sounds and other people’s opinions.

“We like to think of it as recharging by unplugging,” explained Lizzy, as she led me through a bricked courtyard with swings and an herb garden.

Saltwater float tanks have been around since the 50s, when physician and consciousness pioneer Dr. John C. Lilly built one for the U.S. government to find a shortcut into the deep meditation known as the theta state. The tanks were dismissed as a hippie fad in the 70s, only to surface again in the 90s as researchers lauded them as an effective therapy for a variety of stress-related conditions, including chronic pain, sleep disorders, fibromyalgia, anxiety and PTSD.

Neuroscientist Justin Feinstein of the Laureate Institute for Brain Research in Tulsa, OK recently confirmed that floating lowers stress hormones and releases endorphins and is currently conducting a study on multiple sessions as a replacement for the anti-anxiety drug lorazepam. (We’ll see how long Big Pharma tolerates that.)

Veterans have reported floating as a potent way to treat trauma, and athletes and artists use it to increase productivity and improve sleep and mood. Some say it’s even better than massage, since the lack of gravity allows joints and muscles to fully hang loose.

Tyler first discovered floating in Phoenix after spending several years in the Merchant Marines, though he’s no stranger to wet remedies. A native of Sharon Springs, NY, he grew up the historic spa village where city folk have flocked to soak in the mineral-rich waters since the 1700s.

He spent his summers down south at his grandmother’s on Wilmington Island, steeping in the tranquility of the marsh.He thought Savannah might be ripe for a float shop, and while developing his business plan, he reconnected with childhood sweetheart Lizzy, a marketing whiz who’d chucked a phat Manhattan advertising gig to work for an artisanal goat milk company. Together they’ve built a clean, serene haven to bring folks in touch with the most basic of elements.

“I really believe in the healing power of water,” says Tyler, nodding towards a copy of Masuru Emoto’s mind-blowing book Hidden Messages from Water.

“It’s simple but powerful, and it meets you exactly where you are.”

I experienced my first Remedy float the day after the election, so where the water met me was at the turbulent intersection of shock and derrrrrp. Lizzy gently showed me into the anteroom, then left me to my own devices (which I promptly turned off.)

I took off my jewelry, showered and climbed into what looked like a walk-in refrigerator. It was tall enough to stand up and stretch, and I knew the salt water was heavy enough to hold me and that I could find the latch anytime.

As soon as I heard the door seal, however, my panic button triggered. Suddenly, the idea of spending the next hour enclosed in a dark room completely naked sounded like a scene from teen slasher movie. But then I told myself it was just like floating off the beach at Tybee, except without the fear of being nipped by a tiger shark or dragged into the shipping channel by a riptide.

I tucked in the provided earplugs, settled my head on a rubber headrest, and bobbed. After the salt water finished stinging a few scratches I didn’t know I had, I fell into a kind of trance that was something like sleep, only better. My achy shoulders unwound, and I drifted away from the worrying vigilance I keep mistaking for reality.

By the time I became aware of the flutey music that signaled my 60 minutes were up, I felt like I’d been away from the planet for several days, although not for four years, unfortunately. A pump began to whir as it funneled out the water to be sanitized three different ways, and I reentered the world with a deep sense that a lot of frayed synapses had been renewed.

While it’s not as affordable as chicken feed on the self-care spectrum, a float falls somewhere between a pedicure and a massage: $56 for 60 minutes, and $64 for 90 minutes with 15 percent discounts for military, firefighters, police and EMTs. Remedy Float also offers gift cards, which has me thinking that the kindest present we could give our over-stimulated loved ones is a nice dose of nothing. (That, or a headlamp beanie.)

“People have difficulty taking time for themselves,” Lizzy remarked as I stumbled back into the lobby to sip tea and watch nature videos for a few minutes before diving back into my phone.

I thought about my smart friend and her commitment to radical self-care as the path to progress. We can’t care for others unless we care for ourselves, and we can’t jet around trying to fix the world if we’re running on fumes.

So if your aim is to be of service, remember to nurture No. 1, this season and always.