Fluffy focuses on the funny 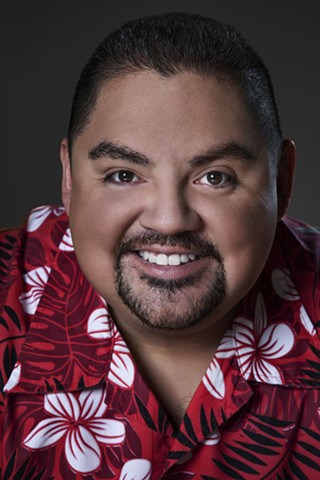 Gabriel Iglesias may well be one of the funniest people on the planet right now. A plus-sized Californian of Mexican descent, the standup comedian defies crowd logic by not spending a whole lot of time poking fun at those two facts.

Early on, however, he would tell his audience: “I’m not fat—I’m Fluffy.”

And it has become his endearing nickname. His upcoming concert film, out in July, is called The Fluffy Movie.

Fluffy has an amazing array of funny voices, which he uses to punctuate his animated stories about people, places and TV. Onstage, he has an engaging, easygoing manner, like the hilarious cousin who keeps you in stitches at the dinner table. His comedy is clean, too.

A regular visitor to Comedy Central, Iglesias first arrived, tubewise, via NBC’s Last Comic Standing (he made it to the finals, but was disqualified for sneaking in his cell phone).

His most recent concert DVD is called Aloha Fluffy, which you can buy at www.fluffyguy.com—along with Fluffy bobbleheads, Fluffy action figures and Fluffy-approved Hawaiian shirts.

Ladies, you might have seen Iglesias as the house DJ behind the male strippers in Magic Mike. His 15-minute routine about making that movie is laugh-out-loud comedy gold (it’s on the Aloha DVD). He also has a role in the April 18 comedy A Haunted House 2.

CS: I heard you say recently that you were determined getting past the easy labels they gave you in the beginning: "Latino Comic" and "Fat Comic." Why is that important to you?

Gabriel Iglesias: I think a lot of times people forget to just focus on the funny. And for some reason, they want to label. People like labeling. I feel like if you believe in the label people give you, that's as far as you're gonna get. That's why I try to stress to everyone, "No, man, I know my roots and I know what I look like. But I also know that I can perform anywhere." And at the end of the day, that's what I want my legacy to be: "Hey, that was the guy that went around the world and performed anywhere he wanted to perform. He had no limitations."

CS: It does seem like there's less and less —in quotes—Latino stuff in your standup now. Is that on purpose?

GI: I'm trying to make sure that everybody that attends the show understands the show to the fullest, and no one's left wondering "What did he say?" or "What did he mean by that?" In the beginning, I was throwing Spanish into my show left and right, but that's all I really knew what to do. And that was the only audience I was playing I front of. So for that time, it did make sense.

But if I’m doing a show in Davenport, Lincoln or Nashville, maybe someplace where not everybody’s gonna understand it, then I try to keep the show as relate-able as possible and as broad as possible. By not alienating people.

CS: The movie stuff you're doing, is that the next logical step right now?

GI: What's funny is, everybody's really pushing the movie thing. It is going well, but it's not my focus. My focus was standup comedy. A lot of people use standup as a stepping stone. This was the goal, to be where I'm at right now in comedy. The fact that all these other opportunities are presenting themselves is icing on the cake, and it's cool to say that you did a movie.

But I don't want to be the guy that just used comedy for the stepping stone. I want to make sure that people remember and respect comedy for what it is. A lot of guys want to use it to get to something better, and I'm like, "What's better than live performing?"

CS: Doesn't all the traveling and the bad food get old?

GI: You know what? I go home every week, I go on the road every week, so every week I get the best of both worlds. When one starts getting on my nerves, I cut to the other. I go home to my family and my dogs, and by Thursday it's like "Aaaah! I gotta go ..." It's a lot of back and forth, and any time I'm in one place more than the other, it does start to drag.

CS: Were you the funny kid in school, doing voices? Did I know kids like you in school?

CS: When did you discover that you could do it front of lots of people?

GI: The first time I got up in front of an actual crowd-crowd, I was probably about 10 years old. It was a school talent show. And I was just really excited to try it. I didn't really have joke-jokes, I just had impressions. I was trying to mimic that guy Rich Little doing an impersonation of Ronald Reagan. It was 1987, and Reagan was in office.

CS: You've said you don't have a writing discipline, that it's all stored in your head. How much of that is purely the way your brain works?

GI: In high school, I was never very good at reading comprehension, or writing in general. Brainstorming and drawing a little bubble and coming up with ideas like that. For me, it seemed like homework. So when I started doing standup, I was really good at remembering what I was talking about, and duplicating that.

Basically, it’s trial and error. Every night I go up onstage, I’ll always throw stuff at the wall, see what sticks. Whatever works, and gets even a little bit of a laugh, I can work off of that.

And so I’ll try it again the next day, and I’ll tweak it. And I’ll keep tweaking the material with a character or a sound effect, or maybe adding a word or taking away a word here or there, in order to make it fly better.

My whole way of presenting things is through story form, not setup/punch. It gives me leeway to say something that probably wouldn’t be funny on paper, but the way that I’m saying it is what makes it funny.