Editor's Note: The Belle of the ball

MOST OF THE ten-man crew of a B-17 bomber during WWII wouldn't be old enough to buy a PBR at the Legion today.

But these young men had one of the most dangerous jobs in history: flying over Nazi Germany in an unpressurized open tube filled with bombs and bullets and aviation fuel, braving subzero temperatures at 35,000 feet, deadly accurate German 88mm anti-aircraft guns, and ridiculously competent Luftwaffe fighter pilots bent on shooting them out of the sky in large numbers.

It was a job so dangerous that 25 combat missions were all they were allowed before being sent back stateside. If they made it that long. Nearly one out of five U.S. bombers in the European theatre never returned to their bases in England.

Like the veterans who flew them — no longer gawky youngsters fresh off the farm, but great-grandfathers in their 90s — the old Flying Fortresses are a vanishing breed.

One of these beauties is in town this weekend, and you can actually fly on it — or just explore inside and imagine what it all must have been like back in the day.

If you saw the film Memphis Belle, you remember that was the first bomber to make it the full 25 missions. Her crew was brought home to parades and hoopla, an invaluable PR weapon on the home front.

The Air Force is restoring the original Memphis Belle, but the B-17 in town this week is the one in the film — an exact facsimile down to the pin-up art on the nose and the swastikas by each gun marking the enemy fighters that gunner shot down.

The Oklahoma-based Liberty Foundation operates the "movie Memphis Belle," as her all-volunteer crew call her. Their labor of love is keeping alive the memory of the veterans who flew and maintained WWII warbirds, as well as educating younger generations about their sacrifice and daring. The Belle's tour this year is dedicated to the 70th anniversary of her namesake's 25th mission.

The cost of a ride isn't cheap in dollar terms: $450. The money goes directly to maintaining the rare aircraft, so in a sense it's priceless — and like I said you can just tour the inside if you want.

Yours truly hopped a media flight on the Belle earlier this week. It was something this son of an Air Force veteran will never forget.

The first thing that strikes you is how compact a B-17 actually is. A behemoth in its time, it's not much bigger than a commuter passenger jet you might fly today between Atlanta and Augusta.

The inside is as utilitarian as it gets, all bare metal, wood, and rubber, the simple scents blending into that distinctive, pragmatic military smell. A narrow catwalk, ominously flanked by dummy 500-pound bombs, gingerly leads you through the bomb bay to the cockpit.

I snag a seat right behind the copilot. Fresh black exhaust wafts in the sliding cockpit window as the four big Pratt & Whitneys fire up one by one. ("She can actually fly on only one engine," says our copilot, a testament to the engineering of the Boeing-built craft. "But we won't do that today.")

Vibrations build throughout the aircraft as the engines spool up for takeoff. There's no sound in the world like these engines at full throttle. No modern jet engine conveys the same sense of raw power and purpose.

In our short briefing before takeoff, we're told the Belle is a "special category" aircraft, i.e., virtually no safety measures other than a couple of fire extinguishers.

Even the seat belts are cursory — literally the second the wheels leave the runway a crew member invites us to get up and start shooting pictures and video.

We steeply rise and quickly bank over the Savannah River for an amazing panorama of downtown and the Lowcountry marsh. We take turns crawling into the Belle's nose, where the bombardier would sit with his Norden bombsight. 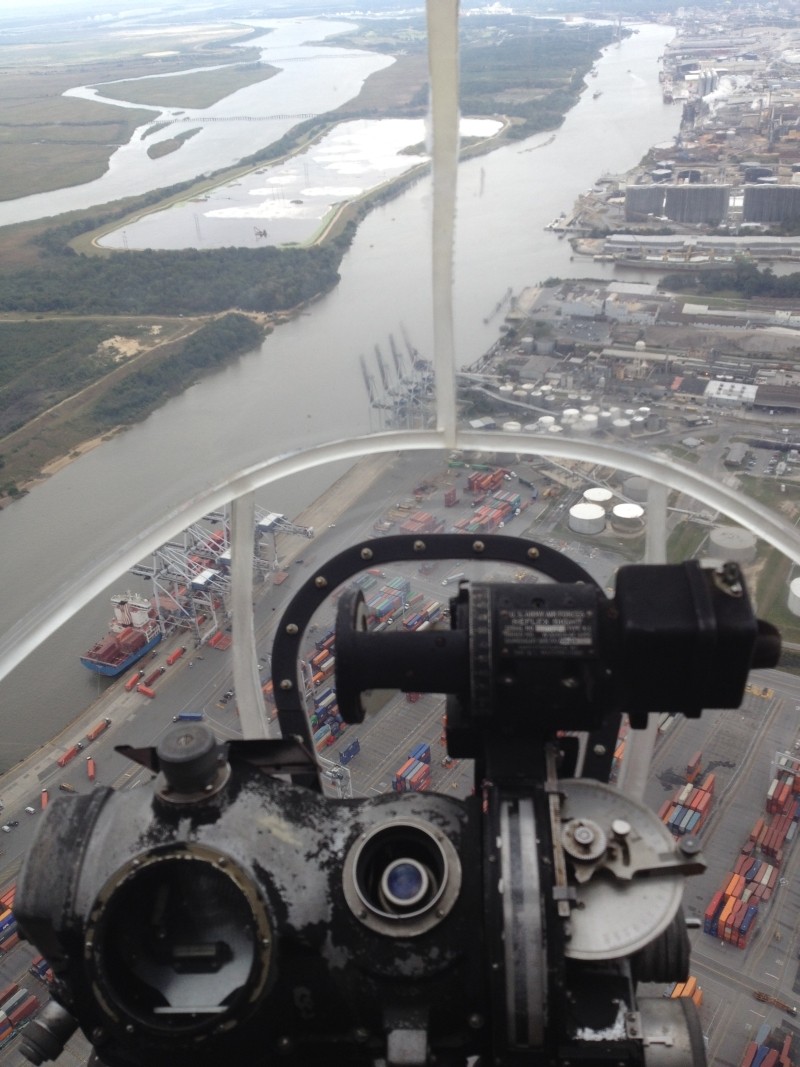 The view from the bombardier's Norden bombsight over the Savannah waterfront

It's the mother of all photo ops — surrounded by clear Plexiglas, you see the ground beneath you, above you, and to the horizon in nearly 360 degrees.

The media flight only lasts about 15 minutes (yours would be about 45). But it feels like much longer as we enjoy this rare experience in the footsteps of the WWII vets who are dying at the rate of 1500 a day -- but who in their youth helped save the world.