'Food is the way we nurture'

Noshes and naches at the Shalom Y’all Jewish Food Festival

WHEN I was 5, I begged my bubbe to show me how to make blintzes.

I loved and looked forward to the pillowy treats stuffed with sweet cheese and smothered with jam and sour cream, but they never seemed to be around very often. While the other neighbor kids went wild for the ice cream man, I went around looking for Jewish grandmothers with extras.

My Jewish grandmother always seemed to prefer reading to cooking, but that didn’t stop me from being a noodge.

“I don’t know, it’s very difficult,” she said, putting down her book. “And don’t give me that sad punim.”

I kept pestering her, and a few mornings later she woke me up before dawn, the kitchen counter piled with ingredients. We spent the next hours measuring and mixing, her calling orders as I fetched cookie sheets and spoons and bowl after bowl that she filled with sugar and cream cheese and lemon zest and vanilla. I tried to imitate the way she folded the thin pancake around the filling, slowing rolling it up into a lopsided package.

Finally, as the sun climbed into the sky, she pulled the lumpy cushions from the oven and placed a plate in front of me. They were kind of rubbery, and the only thing we had to top them with was a half empty jar of mint jelly. I ate half the pan anyway.

“Good, I’m glad you like them,” said my bubbe, settling back into her favorite chair. “Because I’m exhausted.”

It wasn’t until I was a grown-up that I realized blintzes aren’t necessarily that complicated and don’t need to be made in the middle of the night, it’s just that my bubbe had terrible arthritis and was a raging insomniac.

She passed years ago without making them again, and I never got her recipe. Fortunately, there’s a whole mishpocheh of other blintze-making bubbes (and zaydes!) preparing for the Shalom Y’all Jewish Food Festival, taking place this Sunday, Oct. 30 in Forsyth Park.

Organized and produced by Congregation Mickve Israel on Monterey Square, this yearly nosh-fest invites all of Savannah to fress (loosely translated as “stuff yer punim”) on all kinds of traditional Jewish dishes. Volunteers gather in the synagogue kitchen for weeks beforehand, baking loaves of soft challah, stuffing cabbage, packing matzah balls, and assembling trays of hummus and pita.

It’s no accident that I showed up the day they were making my favorite comfort food.

“Everybody has a blintze story,” agreed Ina Kuller as she dolloped ready-made pancakes with sweet ricotta cream mixture last week.

“I remember watching my grandmother make them. Hers were potato, and she used to deep fry them.”

Kuller’s bubbe grew up in Manhattan but likely got the recipe from her granny, who lived in the Pale of Settlement, that war torn strip of Eastern Europe that was sometimes Germany, sometimes Russia, from where millions of persecuted Jews emigrated from in the 19th century.

“I grew up in Lakewood, New Jersey, the home of Golden Blintzes,” says Hollenberg, referring to the factory that ships their perfect pillows to grocery store freezer aisles around the nation.

“I was always excited to see our town on the box.”

Boxed blintzes taste mighty fine, but it’s always a joy to know they’re made by loving hands right here at home, along with the other homemade sweets at the Shalom Y’all Food Fest: Cinnamon-sprinkled rugelach, noodle kugel with plump raisins, honeycakes—there’s enough Jewish grandmothering to go around for everyone.

Of course, savories are on the menu, too, including sizzling lamb in pita bread, hot potato latkes made on the spot, chicken liver paté and pastrami sandwiches piled as high as your head. It all pairs tremendously well with a Dr. Brown’s cream soda or a He’Brew beer and is available to take away or enjoyed in the park as the Savannah Philharmonic performs lively selections from the pantheon of Jewish composers. (A little Gershwin, anyone?)

The popularity of the Shalom Y’all food fest brings plenty of naches, which has nothing to do with a Yiddish version of salsa and tortilla chips. To “shep naches” means to take pride, and an expected attendance of more than 10,000—one of Savannah’s largest gatherings—is nothing to sneeze at. Funds raised go directly towards programming, including the Backpack Buddies project that sends more than 100 local kids home with food every weekend as well as interfaith activities like the community Thanksgiving on Nov. 22. 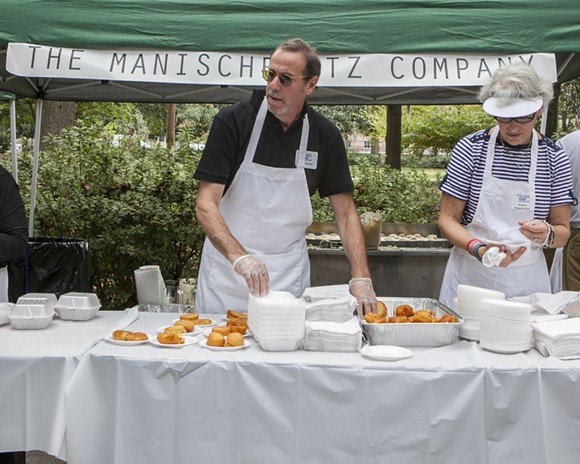 Also benefitting is the Second Harvest Food Bank, which will have collection points throughout the festival and will receive a portion of the day’s proceeds.

As the festival enters its 28th year, it’s always a challenge to wrangle 300-plus volunteers and tens of thousands of food items as one generation hands off organizational protocol to the next.

“I think we’ve developed good cooperation between staff and volunteers to continue the festival for many years to come.”

Established in 1733, Congregation Mickve Israel is as old as the city itself, and the food fest remains a vital link between the historic synagogue and Savannah’s greater good.

“Our goal is to collaborate and be part of the community through food,” says Rich, adding that feeding ourselves and others is a practice not limited to the Jewish community.

“Food is the way we nurture.”

As I remember my bubbe setting aside her aches and pains to indulge my childhood hankering, I feel the truth of those words in my heart.

But when I’m fressing over a plate of perfectly folded blintzes piled with sour cream and strawberry jam on Sunday, I’ll be just a teeny bit relieved somebody else made them.