With a music festival, family and friends remember a young man of infinite promise 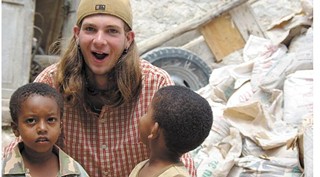 Alex Townsend, says his friend Heather Locke, was "always out there. He was like the wild child of our friends."

His friends called him A–Town. Sometimes they just called him Schmalex.

Alex Townsend was a free–spirited, fun–loving graphic design sophomore at SCAD. He was tall, long–haired and sharp–eyed, with a quick sense of humor. He played the drums, and had an unabashed love for live music and festival–style concerts.

On Valentine’s Day, 2010, Alex was killed when he lost control of his car and hit a tree on Abercorn Street. He was 21 years old.

On Saturday, a little more than a year after Alex’s death, his friends and family will pay tribute with a multi–performer concert at Savannah Station. With Word of Mouth, The Malah, graffiti artist Peat Wolleager and others, the event is called A–Town Get Down.

All net proceeds will go to Savannah non–profit organizations.

“He grew up in St. Louis, but he always had this huge affinity for the South and the Southeast,” says Alex’s father, Missouri–based advertising writer Tom Townsend. “That was one reason that Savannah was such a cool place to him. He just thought Savannah was awesome.”

Alex, his dad says, was a gifted illustrator who felt right at home in Savannah’s artistic community. “I wouldn’t have been surprised if he ended up in an ad agency as an art director,” Townsend says. “When he was younger, he said he wanted to work at my agency.

“But I was always encouraging him to not just limit himself to what he knows and sees, but to get a feel for everything else that’s out there. Because he was so into music, and illustration. I wanted him to make sure that he didn’t just default to what he understood better.”

Heather Locke was one of Alex’s closest friends; they met here during their very first week as SCAD students. “I think bringing all of our friends together in something like a music festival would really mean a lot to Alex,” she explains. “He really loved live music in general. It’s something we all loved, together.”

Alex, Locke says with a smile, was “crazy, he was always crazy. He was always out there. He was like the wild child of our friends. And I really think that’s how I met all of my friends, through Alex. He befriended each of us at some different time, and we all just started hanging out.

“He probably thought of the consequences sometimes, but he lived for the ‘right now,’ the ‘let’s have fun,’ the ‘what are we doing?’”

Also performing at the Get Down is veteran guitarist Walter Parks and his band, Swamptronics. Parks, who played for many years alongside folk icon Richie Havens, is a childhood friend of Tom Townsend’s.

“I always took Alex to hear Walter whenever he was playing in the area,” Townsend says. “Sometimes I even called Alex ‘Walter,’ because Walter was just a crazy, funny spirit as a kid. Very much like Alex.”

When his son started talking about a career in illustration, or perhaps audio engineering, Tom would introduce him to Parks, the professional, road–tested artist, as “the real thing,” somebody the young man ought to pay attention to.

A month before Alex’s accident, Parks and his family relocated to Savannah. The two had made tentative plans to get together.

“At the funeral, Walter spoke and self–deprecatingly said he wished he had the improvisational spirit that Alex had,” Townsend recalls. “He said that he felt Alex was more of the ‘real thing’ than he was.”

It’s awful, losing a child. The day Alex died, Tom Townsend declared – in front of Alex’s friends – that there would be a Savannah concert in his memory. He figures the young people probably thought it was no more than the desperate wail of a grieving father.

It took him a year, but he made good on his promise.

It still doesn’t make the pain go away.

“I don’t know what happened inside that car,” Townsend says. “It wasn’t like him to get behind the wheel and drive crazy. There’s no question that alcohol was involved, but knowing him the way I did, he wasn’t the kind of guy to drink too much and then get crazy behind the wheel.

“He did constantly fidget with his iPod, and get frustrated with it, and I wouldn’t be surprised if maybe there was a complication like that. Maybe the alcohol slowed down his reflexes. The officers believe he hit the curb, barely, and then over–corrected. And the over–correction spun him into the median and he hit the tree.”