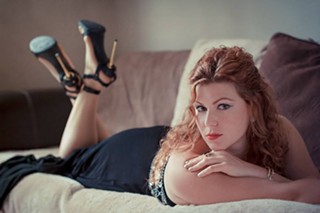 Danielle Hicks has a sultry jazz/blues singing style. She performs, with guitarist Nate Saraceno, as Danielle Hicks and the Eight Ohm Resistance. Next date: March 9 at Molly McGuire's.

For Danielle Hicks, it's always been about following her dreams.

In Tifton, her Georgia hometown, she caught the theater bug. After high school she was awarded a scholarship to New York’s American Musical and Dramatic Academy, a breeding ground for “triple threats” (performers who can dazzle the showbiz world with singing, acting and dancing).

Whatever. “I had an interest in acting,” Hicks says, “but the truth is I grew up singing in my father’s rock ‘n’ roll band.

“Also, I was a great little actress in Tifton, Georgia, but when I got up to Manhattan, I was at a school with kids from New Zealand who were doing commercials since they were 5.”

By the time she graduated, in 2003, Hicks was focused on becoming a “single threat.” Her teachers, fellow students and pretty much everybody else told her she was a hell of a singer.

So she showcased, played clubs and made some recordings, working a corporate job during the daylight hours. She rented a sweet one-bedroom on Manhattan’s Upper East Side.

All well and good, you say. But how did Danielle Hicks become the top blues and jazz chanteuse in Savannah?

Here’s how: Her sister Johnna called.

“We grew up really, really poor,” Hicks explains, “sharing a bedroom in a single-wide trailer. She told me multiple times in our adult life that when I moved away, it kinda broke her heart. And that ‘It was just the same old thing, but without you. And it was awful.’ She’d been asking me to come home for a long time.”

So when Johnna was accepted into Mercer Medical School in Savannah, Danielle took a leave of absence, sublet her apartment —at a loss—and hustled south to help with the transition.

“I think it was my seventh month of paying my Manhattan rent, and draining my 401K, that I was like, ‘I am living in the South whether I want to admit it or not.’ That’s kinda how it happened.”

She had to pay a company to empty her apartment and ship her stuff to Georgia. Hicks fanned out in the direction of the Savannah music scene, visiting open mics, networking and sitting in. She spent two years as vocalist for the blues band Jubal Kane before striking out on her own, first by fronting a small band.

This evolved into Danielle Hicks and the Eight Ohm Resistance. It’s just her and guitarist Nate Saraceno, former bassist for the Eric Culberson Band.

Saraceno uses an onstage looping technique to create, on the spot, a bass, guitar and percussion background over which Hicks ladles her sexy, supple voice.

“Nate is a genius,” Hicks says. “He doesn’t like it when I call him that, but he is so smart. He’s so quiet, but he is a very thoughtful individual. He started working on this looping, to give him a foundation to play leads, and then he took it to a whole other level when he showed up with a stand for the bass. And that has really transformed our show.”

The pair’s next date is Sunday, March 9 at Molly McGuire’s on Wilmington Island. “I still sing some rock ‘n’ roll ... but I want to do a blues album, with some nice jazz influences,” she explains (they’ve been writing songs together, many of which you’ll experience at an Eight Ohm performance).

Her innate theatricality imbues Danielle’s Hicks’ stage persona—she sways and smiles and practically “acts” the song lyrics as an all-inclusive come-on to the audience.

After the album will come more regional shows, and hopefully a tour of the East Coast that will take Hicks back to New York City for an “I told you so” visit.

However it plays out, the new dream is to consider herself a Savannahian. “I’m 30 years old and I’m thinking about buying here,” Hicks says. “I paid Manhattan rent for 10 years, now I’ve rented here for three and a half ... I want to travel the country behind an album I’m really proud of, but I can definitely see calling Savannah my home, sure.” And now, this

• Our friends at Savannah Metal Punx are bringing a catered band-fest to Dollhouse Productions Wednesday, March 12. The FTN Mini Metal Fest 2014 (try and guess what FTN stands for), co-sponsored by Black Southern Death Cult, will feature Lich King, Exmortus, Shadow of Creation, Death of Kings, plus Savannah’s own Beard and Void/Icon. Your $12 ticket for the show (catering by BOH Will Rise!) awaits at brownpapertickets.com.

• The band We The Kings will play the Armstrong Atlantic State University Auditorium April 3. Tickets for the 8 p.m. show are $10 at vendini.com. The Florida fivesome plays pop-slah-punk music; you may recall their singles “Check Yes Juliet” and “Say You Like Me,” or perhaps you saw them a few years back as part of the Vans Warped tour.

Danielle Hicks sings the blues with power and vigor