Owners of El-Rocko Lounge, The Jinx, and Coach’s Corner weigh in amid pandemic

THE live music industry as a whole will undoubtedly see a long-term change as a result of the ongoing COVID-19 pandemic, which hasn’t diminished in severity despite several states beginning to reopen non-essential business and operations.

What does the future hold for live music? As has been seen in other countries, will drive-in concerts become the norm? Or will big tours resume and arenas begin flooding with attendees once again? And if so, when? 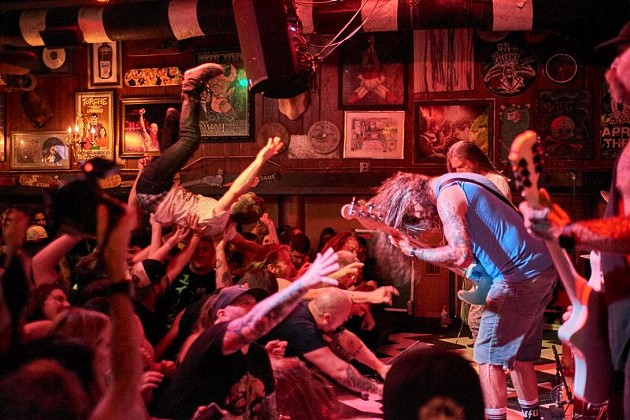 Photo by Tom Cartmel
Every Time I Die at the Jinx.

For local venues like The Jinx, El-Rocko Lounge, and Coach’s Corner, the future is pretty uncertain. Those venues’ owners, Susanne Warnekros, Wes Daniel, and John Henderson, respectively, have all been weathering this unprecedented storm both professionally and personally. And they’re doing the best they can.

“On a personal level, I am stressed,” Henderson tells Connect. Henderson says his establishment quickly reevaluated how they were operating, and decided to do whatever they could to push forward.

“We had to change our business—restaurant and bar—daily to adapt to rules and regulations handed down by the government. Two weeks before we were shut down for dine in, we began to smoke Boston butts, spare ribs, chicken and beef brisket. We prepared these items for families and others to help with their cooking needs. In the weeks to follow we were shut down for dine in so we turned the front part of our dining room into a ‘pop up store,’” he says.

“We never slowed down, working what felt like twice as hard for less sales. But well better than [laying off] 50 employees.”

Warnekros says she’s truly no different than any other business owner struggling right now—it’s something, she says, that they’re all sharing.

“I have no sob story. We’re are all in this together and just trying to navigate our way through it but, it’s bizarre to say the least. As a human, I cannot even express how much I miss my venue, the music, seeing our regulars who’ve supported us for all these years, and my staff that are truly like family to me,” she says.

“It’s definitely a culture shock for me. As an owner, I just keep hoping for the best and brainstorm everyday on ways we can adapt to this era, keep all of us working, and remain a significantly important and open venue for our community.”

“As a venue owner and personally, I’m doing okay. And by that, I mean just okay. I haven’t finished the great American novel yet, nor have I started,” he says. “My one man band box-set is just past the 14-second mark but my pommel-horse skills have gone through the roof since March 24,” he jokes.

Unsurprisingly, each venue owner says they’ve had experience applying for PPP loans and assistance during the last month. Henderson says the process was “a little nerve-wracking” initially, but that it ultimately went smoothly.

Warnekros—who also owns Ghost Town Tattoo with her husband, Brian—says she’s seen “no consistency whatsoever” in the process. They closed both businesses as soon as they were supposed to, and applied for EIDL on the very first day that the application was available.

“We still hadn’t received any correspondence whatsoever for either company until one day, money suddenly appeared in our Ghost Town account with the description ‘EIDG’ which I can only assume is our advance towards the actual EIDL loan, and is considered a grant,” she explains.

“I would like to point out it was not the full advance amount, but nothing to sneeze at—it paid our rent for that one month and we are very thankful for that.”

The Jinx was denied for an EIDL.

Daniel apparently didn’t have an easy time applying for assistance, either.

“I had better luck auditioning for the lead role in Black Panther, but the casting agent didn’t laugh nearly as hard as these loan officers do, and this is on a daily basis,” he says.

Though bars and venues continue to face immense uncertainty and instability, these venue owners say they’re just taking things as they come.

“My strategy for weathering the constant changes regarding state and local ordinances has been to double-check the locks whether I’m inside or outside the bar, thereby ensuring no pesky money slips through. State and local authorities have more than done their part helping me with this and so far, no revenue has been able to darken our door since late March,” Daniel jokes.

Warnekros says she’s been leaning on other local business owners for support, though she says every situation is vastly different.

“I just wake up every day and roll with the punches. Every day is about adapting to a new law, rule or requirement to adhere to or to get funding, so, my strategy is just to keep us all breathing, I’ve been doing pretty good with that one so far. The other bar and venue owners I talk to have been an amazing support group as we all share new info and navigate the storm together, often making different decisions though interestingly enough,” she says.

“As a restaurant and bar, our strategy [has been] that of an athlete. Never give up! We tried to make each day a little better than the last and still are today,” Henderson adds.

It should be noted that as of press time, Coach’s Corner is open for dine-in and has even begun hosting shows again on a trial basis to see if they can be done while implementing social distancing guidelines.

“Future shows are booked and have not been cancelled. As soon as we are given the all clear we will proceed with our scheduled shows. All shows that have been postponed will be made up ASAP, and refunds are being issued to those who want them,” Henderson explains.

Daniel and Warnekros aren’t sure when they’ll resume operations, and aren’t quite sure yet what things will look like when they do.

“My likelihood of booking bands again and reopening doors not only depends on what state and local officials say but more importantly what my good friends on the Facebook branch of Ton Ton Macoute tells me I can do,” Daniel says.

“On a more serious note, El-Rocko looks forward to seeing you all soon. You are sorely missed.”

“There are so many variables that will dictate [putting on shows]. What will our capacity be? Will it be 25 percent of our capacity now? Ok so, will my rent, utilities, insurance, band guarantees and payroll be 25 percent as well? What happens to those employees? Will people even come out? Will they feel safe? Will they have the money to drink? It’s not everyone’s first priority of where to spend their money,” Warnekros adds.

“I think I can speak on behalf of a lot of different kinds of small business owners by saying, we need more help, more consistency, more guidance, more resources, more direct contact, and less loans to the ‘big guys.’”

One thing that doesn’t seem up for debate is that these venues, and hopefully others in our city, will get through this.

“Will The Jinx survive this? Absolutely yes. I know that for a fact, I am in no way ready to let it go and I’m extremely stubborn. Will it be a different kind of Jinx environment? That‘s very likely. There’s just no way to guarantee anything right now. Maybe we will just have to go hibernate in our bat cave for a while and come out kicking and flapping our wings again when it’s a safer environment for everyone. There’s just no way to know,” Warnekros says.

“And lastly, people should stop blaming our beloved bats for this. They didn’t do this!”